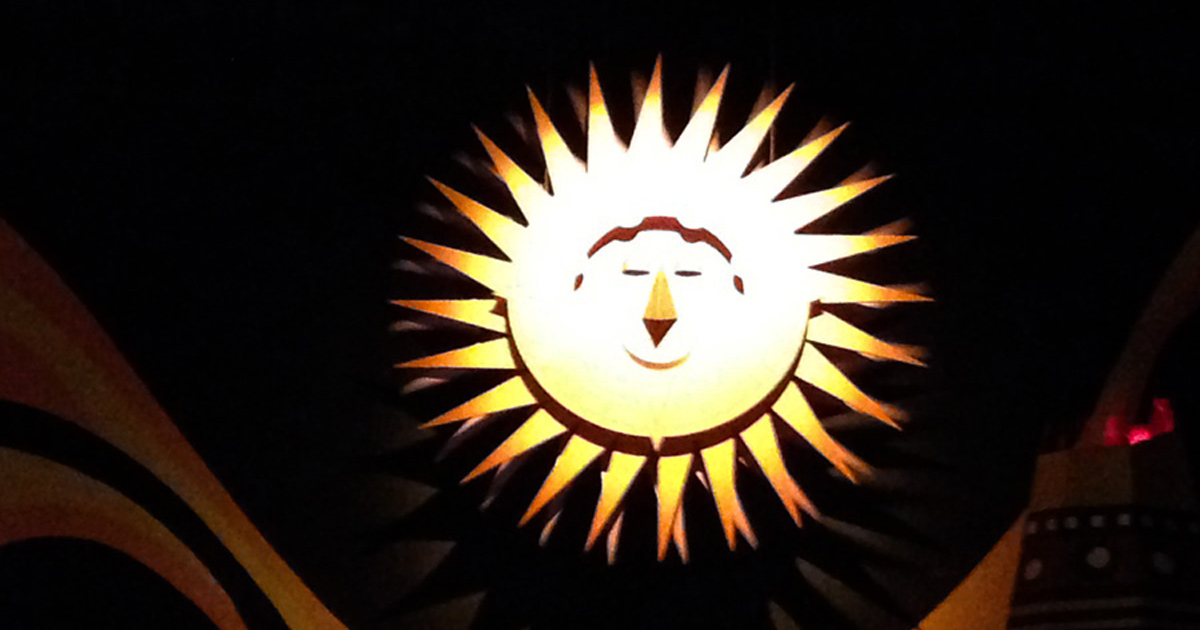 It’s a Small World turns 50 this year. No one thinks of it as a technological achievement. Its charm is in its simplicity. Yet there are a few low tech special effects that actually make the whole thing work.

The beauty is that you aren’t even aware of the clever gadgets. They’re just part of the scenery. And since these things are so mechanically simple, they don’t require an atmosphere-controlled data center with a rack of high-speed servers to keep the whole ride from going 101. They just work, baby.

Here are three of my favorites

You see multiple versions of these throughout the ride, but the “Asia” room is probably the most obvious. As you float past the Taj Mahal and that weird multi-limbed shadow puppet lady, magic carpets circle overhead, while simultaneously rising and falling like galloping horses.

The circling part is easy. It’s just a turntable with cables suspended it from it. It’s easy to take the dipping for granted, but how exactly do they pull that off? Maybe some motors to individually raise and lower each carpet. Motors aren’t exactly high-tech, but there are four carpets on each turntable, so that’s four motors that might potentially break down. And what if they aren’t synchronized perfectly? Then you have carpets that don’t seem to smoothly follow the same path.

Fortunately, the Imagineers came up with an ingenious low tech special effect. There’s a little arm up there mounted under the turntable, which turns in the opposite direction. The noses of the carpets are tethered not to the turntable, but to the arm, which continuously shortens and lengthens the various cables by virtue of its offset axis. It keeps the carpets in perfect synchronicity and gives them the undulating motion of a ride on an invisible roller coaster. It’s a few moving parts, some pulleys, and some cable. Low tech, low maintenance, perfect motion. 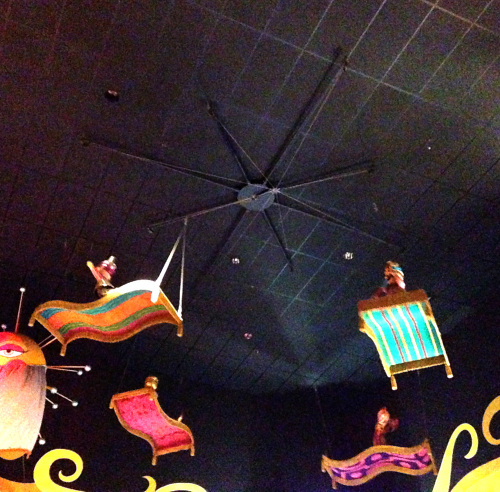 There is just one moon and one golden sun, which we have already exposed as being a complete falsehood. But one of my favorite effects is the sun in the South America room, which might also be Mexico, even though that is in North America, but Small World geography never bothered me much.

This sun is actually one of the few dynamic suns in the ride. It has beams which seem to continually radiate light, in spite of the fact that thing is made out of plywood. It’s not done with electronic light controls or programmable armatures, but rather with our familiar old friend, Mr. Turntable.

First, you have the static sun, which is just a plywood Mary Blair sun cutout. It sticks out from the wall a bit, with its sunbeams spiraling around it in a series of triangular spines.

Behind it appears to be another cutout sun of the same pattern, but mirrored, so that its spines are angled the opposite direction. As the turntable rotates, it exposes progressively more of the of the sunbeam with each degree, creating an optical illusion that the sun’s rays are pulsating outwards. 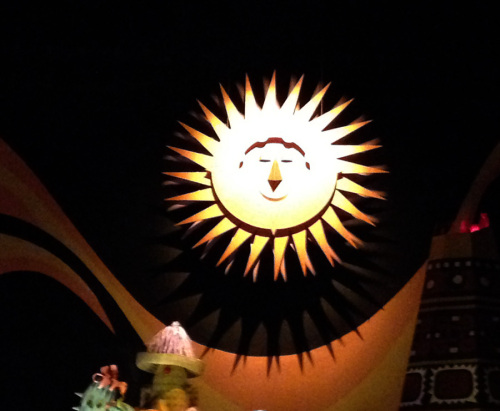 I’m actually not sure if this low tech special effect has been removed entirely, or if it’s just broken. But in the last room (Antarctica, where all the children of the world go to suffer a horrible frozen death), you can see a cable strung between the walls across the channel. This cable should be home to a circus performing cyclist doll, who wheels back and forth across the thin thread (the cable is still there but the cyclist has not been seen for a while).

One look at the cable’s thickness and you can see that this actually is kind of an incredible feat. They have some kind of animatronic-mannequin-whatever literally cycling a tightrope over a boatful of guests. One might be tempted to assume that the guy is anchored to the rope, but it’s clear that he’s moving back and forth. Why are they so sure that he won’t fall off?

Part of it is balance. The cyclist himself is probably very light. He carries a long pole crossways, upon which two other acrobats are dangling from each end. These guys are probably weighted so that their heaviest mass is actually drooping down below the wire, the sheer force of gravity keeping them firmly tugged down so that one of them can’t suddenly shift above the wire and upset the applecart. This low tech special effect is a simple system of counterbalances.

That’s all well and good, but how does the cyclist then move back and forth? Do they have a little motor in there making the guy pedal? As we’ve already said, complex motors are prone to break down, and this one would need to keep the cyclist moving backwards and forwards, always hitting his mark.

But fortunately the answer is much simpler, and even though there is a motor involved, it’s basically back to gravity.

One end of the cable is designed to raise and lower between a span of about twelve inches on the wall. Lower the cable and you create an incline, the cyclist starts rolling downhill. Raise the cable and you’ve now reversed the incline. He cycles backwards the way he came. It keeps him moving along the same path. 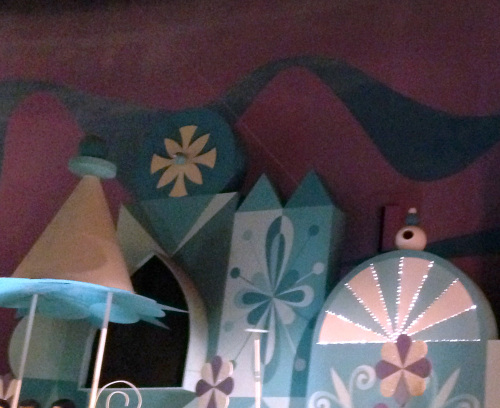 No cyclist pictured, but you can see the slit in the wall where the cable is raised and lowered. That faint white line cutting diagonal across the top half of the picture is the tight rope.

None of these low tech special effects are all that spectacular when you look at them, but their cleverness has always fascinated me. Check them out the next time you’re on the ride.