Since we’re on the subject of Alien Encounter, I want to share some pictures with you of my toys. Because that statement didn’t sound creepy at all.

Did you know that back in its heyday, Disney marketed a line of action figures based exclusively around this attraction? And there were some pretty good ones! I have the whole set, which I keep on my desk at work, to remind me that if I’m not scary enough, Michael Eisner might swoop in at any moment and order me “re-imagined.”

I predict that that the 80% of you who have never heard of these things will immediately check eBay for the going rate. I predict also that 75% you will scoff at the exorbitant prices some collectors think they can get away with. For the other 5%, you people need to realign your priorities and stop spending money on silly theme park memorabilia. Focus on those Kitchen Kabaret plush toys instead. 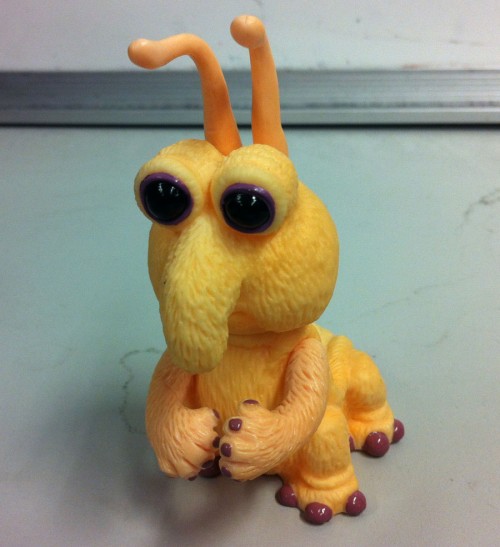 First up is Skippy, the cuddly teleporting alien with the wobbly eyes and anteater snout. He looks positively adorably here, with posable arms and plastic molded back legs — just like the real AA figure! 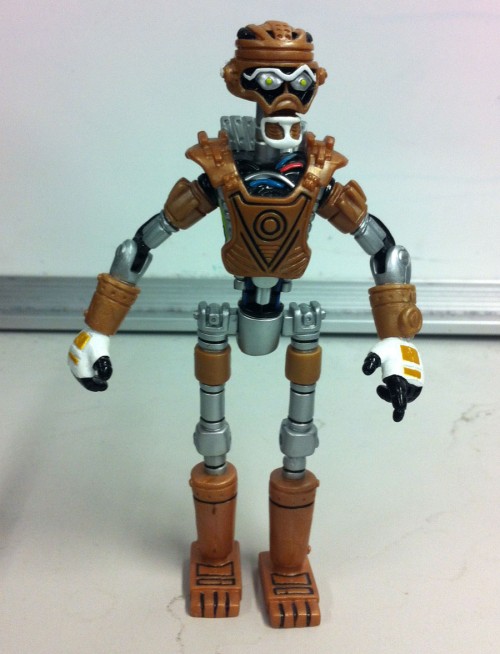 “Welcome to the great big universe of X-S.”

Next up we have S.I.R., which stands for Simulated Intelligence Robotics. S.I.R. is one of those rare action figures that can be voiced either in your best Tim Curry impression, or your best Phil Hartman impression. With some extra paint and a little bit of play-doh, he can even be voiced in your best Richard Kind impression, but you really don’t do a very good Richard Kind, so I recommend sticking with Curry or Hartman. 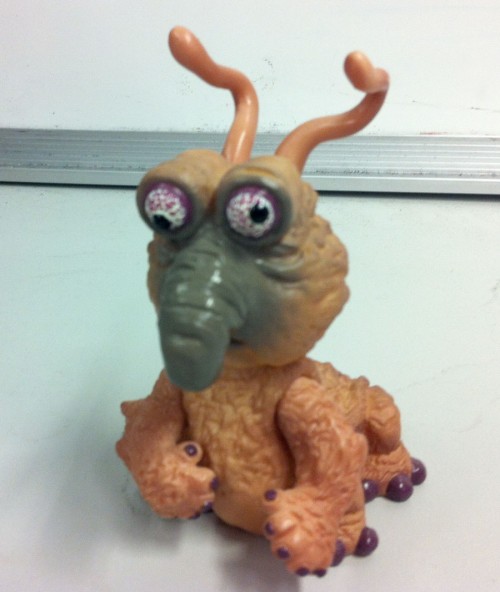 “You’re not burned. You’ve just got a healthy glow.”

How awesome is this one? Fried Skippy! Kudos to Disney merchandisers for recognizing the sales potential in a torturous experiment gone awry. Fried Skippy’s eyes are painted with fine bloodshot details, and his fur is a nice tone of “burnt toast.” He may not look like much, but his arms are still fully posable!

And now the piece de resistance! The Alien! You probably don’t quite recognize him. To fix this, fill your room with mist and blink your lights on and off really fast. The alien is painted a pleasing blue and green color, and is certainly misunderstood. Before he came through the teleporter, I’m sure he looked like Good Skippy up there.

If there is anything to complain about with this product line, it’s that they did not follow through with action figures of Chairman Clench, Spinlock, Tyra Banks, and Kathy Najimy (whatever their characters’ names were). Maybe we can convince Disney to give us a set for the 20th Anniversary. D23, are you listening???