For many years, the Walt Disney World Shopping Village was a sleepy little place, full of magical sunsets, silent seagulls, and stately evening dinners aboard a ship named for Walt’s wife.  Then one evening, some up-and-coming executive happened to tune in to VH-1 and discovered a new word he had never heard before:  “Edgy.”
After a careful deliberation of about eighteen seconds, it was decided that Disney needed to become “edgy” in order to appeal to a “more edgy” audience.  Said audience wanted to do “edgy” things, and the executives went on a vast search for all things “edgy.”  In their journeys, they discovered that the two most “edgy” things in the world were “clubs” and “malls.”

In one fell swoop, the charming Disney Village became the “edgy” Downtown Disney, complete with a West End, a Pleasure Island, and a Marketplace (an “edgy” name for “mall”).  The quaint and distinct flavors of the village shops were replaced with a homogenized blend of standard Disney theme park souvenirs.  The soaring seagull logo was ditched in favor of neon and street music.  Walt’s wife was kicked to the curb, and her restaurant taken over by someone named Fulton.  And after all these transformations were complete, the place finally looked good and “edgy” (except for McDonald’s, but work with me here).
Maybe it didn’t happen overnight.  The marketplace evolved over the course of a decade, the “edginess” creeping in shop by shop.  A pin trading station here, a t-shirt factory there, a Jonbenet Ramsey boutique over in the corner…  Now the Village is almost unrecognizable.  About the only building that still looks virtually untouched is the Cap’n Jack’s Oyster Bar. 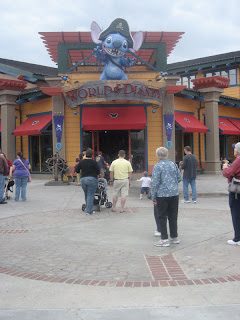 By the time a 15-foot tall Stitch planted himself on top of the World of Disney and started expectorating at everyone in sight, visitors had come to accept that the softness was gone from this corner of Walt Disney World.  Here, everything was all edges. 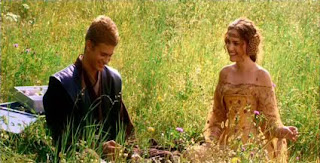 Not like Naboo, where everything’s soft.  And smooth.
The path of Stitch’s saliva is a great source of delight to small children, and a source of infinite annoyance to those who are not looking up.  One could argue that even if they are only looking at the ground, a giant puddle in the middle of theme park country usually means random water squirts, but give them the benefit of the doubt.  It’s not like this happens all the time in Wisconsin.
In fact, as people dodge the alien raindrops, they may not realize that the cuddly blue space monster is actually spitting on the grave of one of Walt Disney World Village’s charming little icons.  See that rather strange diamond shape in the walk, almost in range of Stitch’s drool?  That, my friends, is all that’s left of the World’s Largest PeriKaleidoscope. 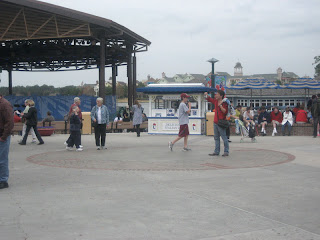 If this was the last scene of Carrie, a ghostly pattern of lights would reach out and grab that dude.
What is it, you ask?  Well, it was a tower.  A tower of a thousand colors, easily the tallest landmark in the Shopping Village (except maybe the Empress Lilly smokestacks).   A periKaleidoscope is mashup of periscope and kaleidoscope, and its only purpose was to generate random patterns of color and light completely without the use of recreational drugs.  It sat on this very spot, outlined by brick, and devoid of opportunistic soakings by obnoxious cartoon characters.
It disappeared sometime in the last decade, to make way for that oh-so-fun spitting thing.  This obscure footprint is all that remains.  Well, almost.  You can still see the Perikaleidoscope at Downtown Disney, if you know where to look.  Just find the little carousel over by Earl of Sandwich, and study the panels as it turns.  One of them contains a very faded picture of the tower in all its former glory.
Be sure to spit at it when you see it.