As a Disney World fanatic growing up, I would always end each trip with a collection of park guide maps, so that I could pour over them later back home in Indiana.  Sometimes I couldn’t wait until I got back home, so I would pour over them in the hotel room.  Remember back when it was an actual booklet?  Staples and everything.  I loved the little one-sentence descriptions of everything.  Even the snackbars and souvenir stands would get a description.  I had these things memorized by the time the next trip came around.  I would even call the Pirate and the Parrot by its official Spanish name, without even knowing how to pronounce Spanish.  I guess that’s what Disney geeks do.

Now we’re lucky if a smaller stand even gets mentioned on these cheap one-sheet maps, much less a description like “Cakes, coffee, breakfast fare” or “one-of-a-kind pirate trinkets, instruments of torture, underwear.” One of the items that stuck with me was the Catwalk Bar at the Disney-MGM Studios (“Beer, wine, cocktails, and specialty drinks”).  I knew where it was located:  Near where the orange square of the Soundstage Restaurant met the other orange square of the Brown Derby.  Not being a drinker myself (and also being underage at the time), I never sought out the Catwalk Bar, though I distinctly remember eating in the Soundstage Restaurant, themed to a forgettable Bette Midler movie.

Years later, I remembered the Catwalk, but by then it had long disappeared.  Even the Soundstage Restaurant was gone, replaced by that awful Playhouse Disney show.  I began to wonder if it had really been in the catwalks, or if it was just a bar inside the restaurant.  The old guide maps didn’t show elevation.

I examined the outside of Playhouse Disney, and even forced myself to sit through the show (quite an uncomfortable feeling, when you don’t have kids).  I could see no remnants of a bar in the rafters.  But when breezing back through Brown Derby, I did come across this secret staircase. 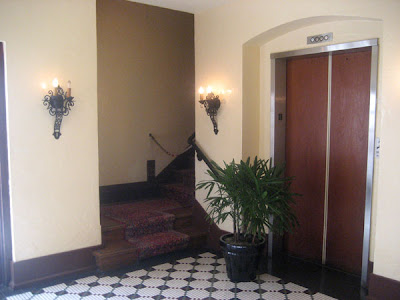 Okay, it’s kind of in plain view, but in a low-traffic area of the restaurant.  And it does turn out of sight, and there’s almost always a rope across it, preventing you from going up.  There’s no signage anymore, but I’m convinced this is the last remaining evidence of the Catwalk Bar, which would place its location somewhere above the Brown Derby, but probably looking down on the Soundstage.  A search of the entire internet revealed absolutely no pictures of the Catwalk Bar itself, so if anybody has any out there, I’d love to see them, just to know what it looked like.  Drop me a comment if you can hook me up.

I did come across an old page on Disney’s actual site though.  Kind of funny that this is still hanging around out there.  Apparently if you’re disabled, you can travel through time to checkout out these attractions.