No matter how you look at it Horizons was an attraction that closed too soon. Even those who felt it was dated before it even opened at Epcot Center in 1983 would have to admit that being operational for a scant 16 years was a disservice to the enormous effort that went into creating it. But the story of Horizons is a long and sordid one and perhaps one we will tackle on another day.
The simple truth is that attractions, even really great ones, sometimes get torn out and close for one reason or another. Sometimes they deserve it, other times not but one thing all these closures have in common is that it gives us a chance to do some good old fashioned parkeology. That is to say that we can research what traces are left of the original attractions and how those remains have affected other areas of the Disney empire.
Horizons looked at the future and how we might live and interact in it. It examined three potential areas to colonize as our world population continues to grow; the deserts, the oceans and outer space. In each location Horizons showed us a concept of a future vehicle we might one day enjoy.
There was the hovercraft (officially known as the Pegasus Hover Lift) for a quick trip around Mesa Verde. 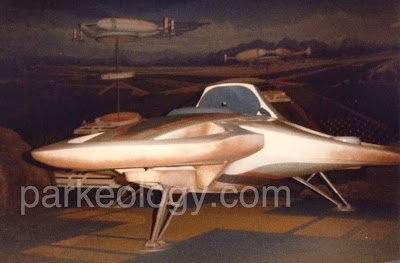 Yea, nothing like an non air conditioned open top flying pod to keep you protected from the blistering desert sun of the future!
The Solo Sub was part of the vast Sea Castle undersea development. This mini sub was used to zip around the sea floor and take in the view. 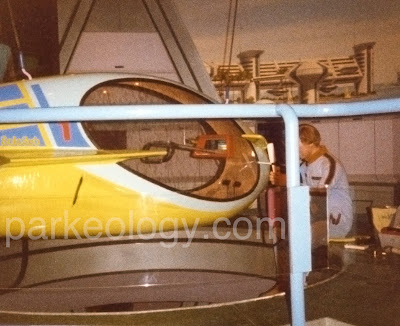 James Cameron pities that tiny little sub, he has bigger in his bath.
Finally we have the Space Pod used at the Brava Centauri space station. The space pod bears a striking resemblance to the Solo Sub that always bugged me a bit but it allowed for a cool projected transition from under sea to outer space as we saw a Solo Sub morph into a Space Pod. 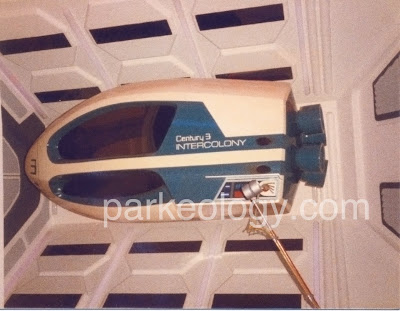 Notice how it says “Century 3” on the side? That was the original working name for the Horizons pavilion… Parkeology at work even nearly 30 years ago!
Props this cool would obviously be carefully removed from the attraction upon its closing and preserved in the vast Disney archives right? They must have a giant warehouse full of these wonderful set pieces. 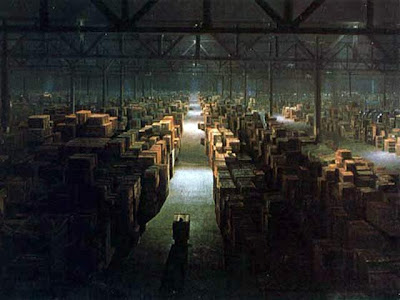 The Disney archives of our dreams carefully house and preserve park artifacts, treating them with kid gloves, perhaps the single rider Horizon vehicles are safely tucked away here?

At the very least maybe they would be sold off at ridiculously high prices as the prized possessions of wealthy collectors. Right… that’s the only thing that would possibly make sense… Or maybe there is another option… how about sending them on a European vacation and then having them rot in the baking sun as generic props in the worst park Disney has ever conceived of, yea THAT’S THE TICKET!
Amazingly Disney chose option number three, packed up a couple of the subs and the Hover Lift and shipped them over to Disneyland Paris where they were relegated to the miserable little Disney Studios Paris park.
The first Solo Sub was spared the worst fate; that is until recently. It could be seen in the Backlot Express hanging from the ceiling as an un-credited “movie prop”. The Backlot Express, a mediocre counter service restaurant at Disney Studios Paris, was actually a highlight of this meager little park. It at least had some level of theme applied to it, that was in stark contrast to the mostly un-themed majority of the park. It was meant to appear as a prop warehouse, perhaps not unlike the one I wish Disney actually had to house these many relics of the parks past. Junk filled shelves, larger scale items hung from the ceiling… there was some cool stuff in there like a speederbike from Return of the Jedi (a repro I am sure) and a jaws look-a-like fake shark (Disney should probably let Universal handle the shark duties though). 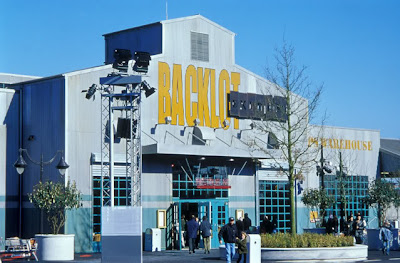 What does it say about a park when THIS is the pinnacle of themeing?
While the Solo Sub hung anonymously from its perch it was at least saved and sheltered. Sadly last year Disney decided that the last thing this park needed was a nicely themed dining room, rather they wanted to force some more synergistic wonderment on the European Disney fans and so the Backlot Express was shuttered. The unique props were all removed and disposed of and in its place opened the Blockbuster Café. Where the Solo Sub once hung now hangs a banner for Wildcats Basketball… some sort of High School Musical tie in, another piece of the park history lost.
But I did say that there was another sub and the hovercraft also sent to Paris right! Perhaps they faired better… sadly, no. 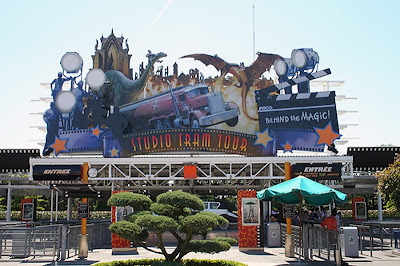 Look at the magical detail visible in the flat plywood cut outs and the bare steel fencing.
The Parisian studio park features a pathetic little tram tour and as part of this they pass through the “bone yard”. We are told that this is where they store larger props and vehicles used in the many Disney produced live action blockbusters like Pirates of the Caribbean and um…. well like Pirates of the Caribbean. There, sun baked and slowing eroding away you will find the second Solo Sub and the Hover Lift. 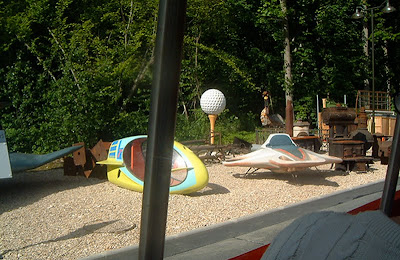 The dawn of a new Disney junkyard of the future here today!
Check out this video to see more… it is another parkeology exclusive.
Did you catch something else interesting in that clip? Look carefully… Next time I will tell you what other former park treasure has been abandoned in the backlot… and this one is much newer and truly should be in active use today.