It is well established that we suck! Everything Disney gets in Tokyo is far superior to our honky-tonk, county fair, ho-down like experiences. If given a choice between a trip to the Tokyo Disney Resort and say ending world hunger only a fool would choose to feed the children. In fact in my very own completely non-biased, super scientific and ultra fair comparison Tokyo Disney Sea emerged as the greatest Disney park out there, besting even the original Disneyland. Sorry hungry kids of the world but we have to get our priorities in order.

As shocking as it may seem even the Japanese are fallible and the proof can be found in the now defunct Castle Mystery Tour that operated at Tokyo Disneyland for 20 years from 1986 to 2006. Two missteps are at play here; the first was building a major new attraction (it was a “D” ticket… that’s the second best for you youngsters) that hinged on the success of the Black Cauldron (that’s a crappy, failed Disney animated movie that nearly destroyed the animation division. Please try to brush up on your Disney history so I can stop with the parentheses.)

The second was closing it down as it was totally unique and had a charm about it that is hard to find elsewhere, especially in mega rigid Japan. So yea, I’m saying it was a mistake to both open it and to close it, Disney just can’t catch a break can they? Some fool on some obscure blog is going to complain about something no matter what they do. Worse yet that fool may not fully understand all for forces at play and really be clueless of the actual facts… but we won’t let that stop us.

The Castle Mystery Tour was great for many reasons. First off it was a real and honest attraction set inside the castle. Not murals, not a restaurant, not small dioramas not character meet and greets not a super fancy off limits hotel room or even a self guided walk through, it was a real attraction with real effects ad a real storyline that was well worth seeing.
Secondly it had a dragon. A big A.A. (OK seriously… if you don’t know what AA stands for why are you even reading this?) dragon lurking in the basement. While everyone seems to know about the dragon that lives beneath Le Château de la Belle au Bois Dormant in Disneyland Paris few seem to realize that a virtually identical one pre-dated it in Tokyo by more than 6 years. In fact it is a logical assumption that if not for the Japanese version the French would likely have a big empty hole beneath their castle instead of the crazy cool reptilian that currently calls it home. 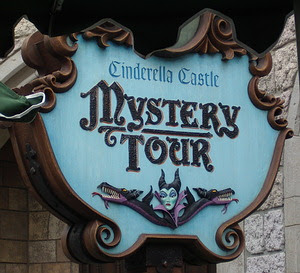 Third is the fact that it was really the only other attraction (along with the Jungle Cruise) in which cast members narrated the entire experience and therefore had a HUGE impact on the show. The Japanese tour guides really took their roles seriously and had a lot of fun playing the part. While the narration was 100% in Japanese the visuals and audio cues were pretty easy to follow.

We’ll save the final factor of greatness for later but suffice it to say that those children may not only go hungry but also be deprived souvenirs as well… stay tuned. 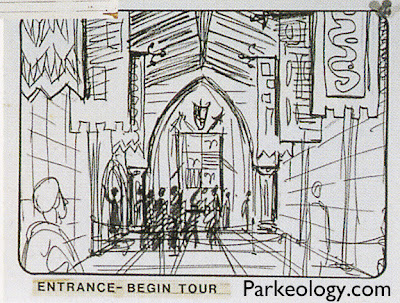 The entrance to the attraction was at ground level along the side of the castle. Groups would collect outside of the doors and be led in (20 or so at a time, they could run 2 groups simultaneously through twin sets, ala the stretch rooms at the Mansion) and congregate in the foyer. As with every other Disney attraction ever created something goes horribly wrong at this point. What was billed as a calm tour of the castle’s beautiful chambers takes a turn for the worse when classic Disney villains (and the Horned King) feel slighted at being overlooked for so long.

Our tour guide banters with the Magic Mirror from Snow White who appears throughout the attractions to help move the story along. The Mirror sends us on our way through the unknown nether regions of the castle. It all gets very dark and spooky, bats screech, prison cells are traversed, dumbfounded Americans are scolded for trying to take pictures (give me a break, I couldn’t understand a freaking word).

Eventually we descend one of several sets of stairs into the Queens liar where we see she is making the apple that will be used to take out Snow White. The tour continues through some dungeons and the cast members really play up the creepiness with lots (and lots and lots more) exposition as to what exactly is happening (or as we might call it, unintelligible gibberish). We catch a glimpse of Chernabog and move on through several more spooky dungeon scenes. 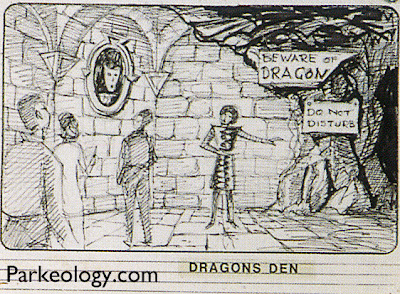 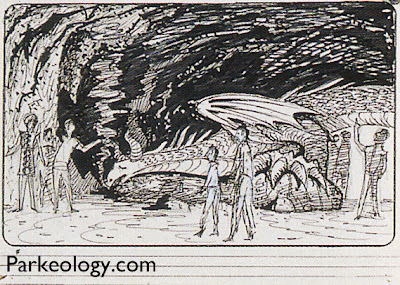 Down another dark corridor (this attraction would have lasted exactly 32 minutes in the U.S. before someone’s Lil’ Rascal scooter flipped over and 12 subsequent law suits were filed) we come upon a talking skull who warns that there be squalls ahead and the dead men tell no tales or something like that. At this point a cave full of glittering jewels is made visible to us and as lighting strikes we see the aforementioned dragon chilling in the cave. He wakes up and the guides warn us that we have to flee. As in all the best Disney movie escapes we head to the nearest elevator. You didn’t realize that medieval castles were equipped with elevators did you? They had ADA issues back then too… only they didn’t and we are in Japan but whatever.

Up we go in the elevator, when the doors open we are in the world of The Black Cauldron. Wall tapestries weave a tale of poor story telling, lack of focus, PG ratings and regime changes… The guide keeps blathering in Japanese (seriously, the amount of narration in this thing is incredible) but the gist is that the Horned King controls the soldiers of death and that we are all screwed. 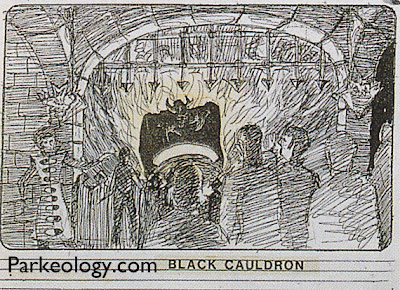 So the guide bickers back and forth with the mirror and we join the second group (which has been mirroring us through the tour) in a big and impressive recreation of the Horned Kings liar. As impressive as the dragon’s den was this is even more so.

The king appears and informs us (no joke here) that we are all going to die, that Satan’s kiln controls us all and that he will resurrect an army of the dead to torment what little is left of our lives… you know, typical happy go lucky Disney stuff.

Mr. sour puss starts chanting and the undead start rising all around us as spirits of death billow from the cauldron of doom. But wait, a magic sword of light is handed to a lucky guest who points it at the Horned King (stay on target) and shoots a blinding beam of death… I mean light that kills the king (don’t get cocky kid).

We adjourn to a side room where the final great thing about this attraction takes place… they give something away! Not a piece of paper, not a magical wave or a smile… no they give away something real, and cool. The lucky guest who wielded the sword (generally a child) receives a bronzed medallion that is hung around his or her neck as they accept a grateful round of applause. However on my first visit they unexpectedly handed me the sword! Why I am still not sure, there were kids in our group but I guess the goofy American guy was enough of a novelty to warrant breaking from tradition. Honestly, these kids all looked pretty well fed (Japan is one of the wealthiest nations on Earth) so I did not feel too bad plundering the loot. They were all very good natured and people seemed to get a kick out of it, oddly even asking to have photos taken with me afterwards. 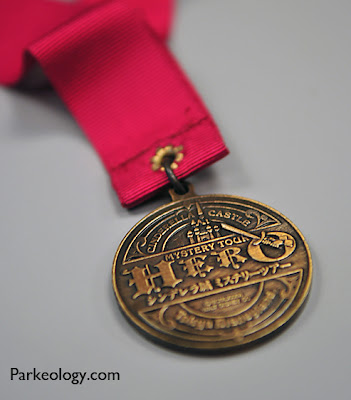 Now how many Disney attractions can boast dedicated cast members, unique story lines, large set pieces and the chance to walk away with cool free stuff?

Sure, the Black Cauldron was probably not the best choice in retrospect, but it worked… it was unique to the park and now with the closing of this, Meet the World and The Mickey Mouse Review that is getting to be more and more rare. (Though this being Tokyo after all they still have Pooh’s Hunny Hunt, Monster’s Inc. Hide and Go Seek, and several other exclusive to Tokyo attractions… plus all of Tokyo Disney Sea for that matter).

A new more friendly attraction is supposed to open later this year but my guess is that not unlike Stitch destroying Alien Encounter the ship may have sailed on the Mystery Tour for good. But I still have the medallion and my memories (even if they would not allow a couple of photos… geez).


Check out this video from the closing days of the attraction.  It is a very dark place to shoot so this only gives a general sense of what it was like but you will get the idea.  And notice at the end, they gave medals to EVERYONE… lucky fools!

UPDATE:
In the comments section Shane asked about a walk around character they used to have dressed as the Magic Mirror… yes, quite bizarre, quite Japanese… and here he is: 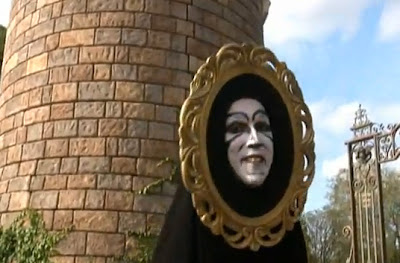 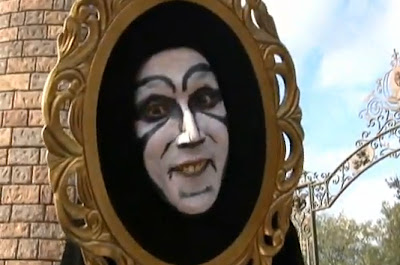 Special thanks to www.tdrfan.com for the photos as marked.