(A quick note… you can enlarge the scans to read them if you like.)


With the recent news that Disney is now allowing hippies, beatniks and general good for nothing hooligans to run rampant while employed at the Disney parks, Parkeology thought we would take a look back at the salad days of the mid eighties.
You see, we have always taken a Walt Disney World centered approach to things around here.  Yes, Disneyland is the original, yes Tokyo does everything better, yes the Florida management seems to be made up mostly of blind squirrel monkeys, but still, Walt Disney World is OUR park damn it!
So while we could have gone back to the Magna Carta of Disney employee guides–Disneyland circa 1955–we instead decided to look at what we consider to be Walt Disney World’s golden era, the mid 1980s. This was a time of great excitement for the Florida parks.  Sure, behind the scenes EPCOT CENTER was tanking and bringing down the company with it. Yeah, the company was almost the victim of a hostile take over and all of that, but from a guest’s point of view–especially a kids point of view–this was the magic hour.  The Magic Kingdom had been established and built out, EPCOT CENTER was a wonder, Eisner had taken control and started pouring money into the place and there were just vague rumors of new parks and resorts to come… it was all optimism and joy… the future was so bright we needed to wear shades.
There have been a lot of local news reports spouting off misinformation about why the rules have just been changed, not unlike a decade or so ago when they were relaxed for the first time, but who knows the truth? Maybe Disney is fearful of discrimination lawsuits, maybe they need to expand the work force pool of possible employees, maybe Iger just decided to grow a sweet Fu-Man-Chu… I have no idea.  But I do know that in 1986 times were different.
We hit up the vast Parkeology archives and pulled the following manual to take a trip back in time. This is “The Disney look” a brochure given to all employees to teach them the do’s and don’t’s about how to groom and present yourself in the Disney manner. I’m not sure that this would still be relevant today, truthfully, but it is a time capsule of another era.

They don’t make a big deal of the rules on beards and mustaches… one short paragraph that reads:

“Moustaches and beards are not permitted.  The exception to this rule is where an individual was hired before the establishment of this standard.” I bet Roy had them drop that last line in there.
But the manual is interesting for a number of reasons… First of all check out a young Mitt Romney on the cover… Now notice the odd lack of any Asians. 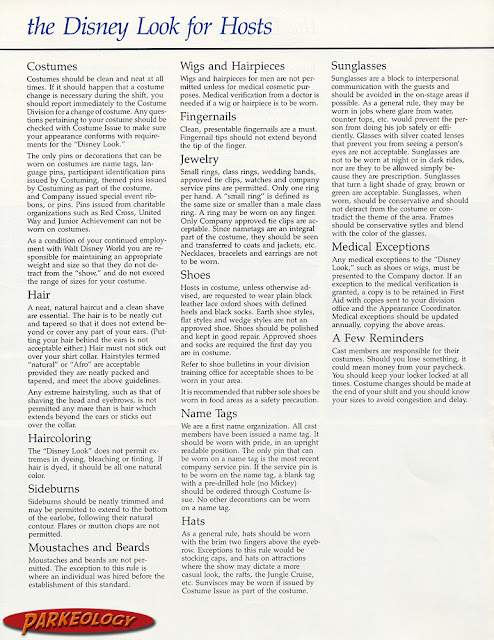 White guys… no problem, you are covered. White girls… check, mostly cute of course.  But we have a nice sampling of other ethnicities… remember this is a mega conservative, big (even then) company presenting an All-American slice of diversity.  So we have African Americans, Hispanics, men and woman, old and young… and yet you have to get to the last page before you see ONE Asian person, and even then she maybe sort of could be Hispanic and not Asian at all!
So clearly Disney of the mid 80s had something against hairy Asian people… I smell a class action lawsuit.  I’m not sure if Kevin Yee was working at Disney at this time, and he does not seem all that hairy to me, but let’s get him involved… maybe he can write a quick book about it to get the ball moving.
I don’t want to make a huge deal of this but after all, Asians are the fourth biggest ethnic group in the country, making up roughly 5% of the population.  Come on guys… this is supposed to be all-inclusive, the Benetton of family getaways… what gives? 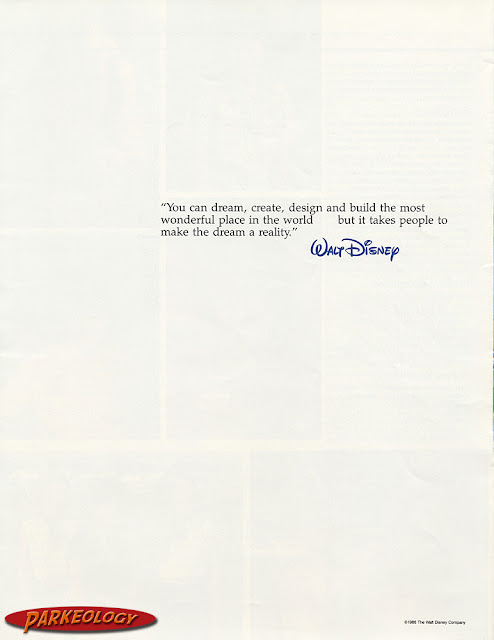 Honestly even at the time and I am sure much earlier the Disney Look was considered a bit of a relic.  It’s amazing that it has lasted this long… but it is that very lack of hipness, that square old fashioned sensibility that works for Disney and has always worked for them.  When they try to be cool things go sideways… so get ready for the hipster facial hair to decend on the parks and think back to an older, slightly better time when hair and those pesky Asians were kept in check.
(BTW, for the record I am not Asian… but my daughter is. Her moustache is spectacular.)