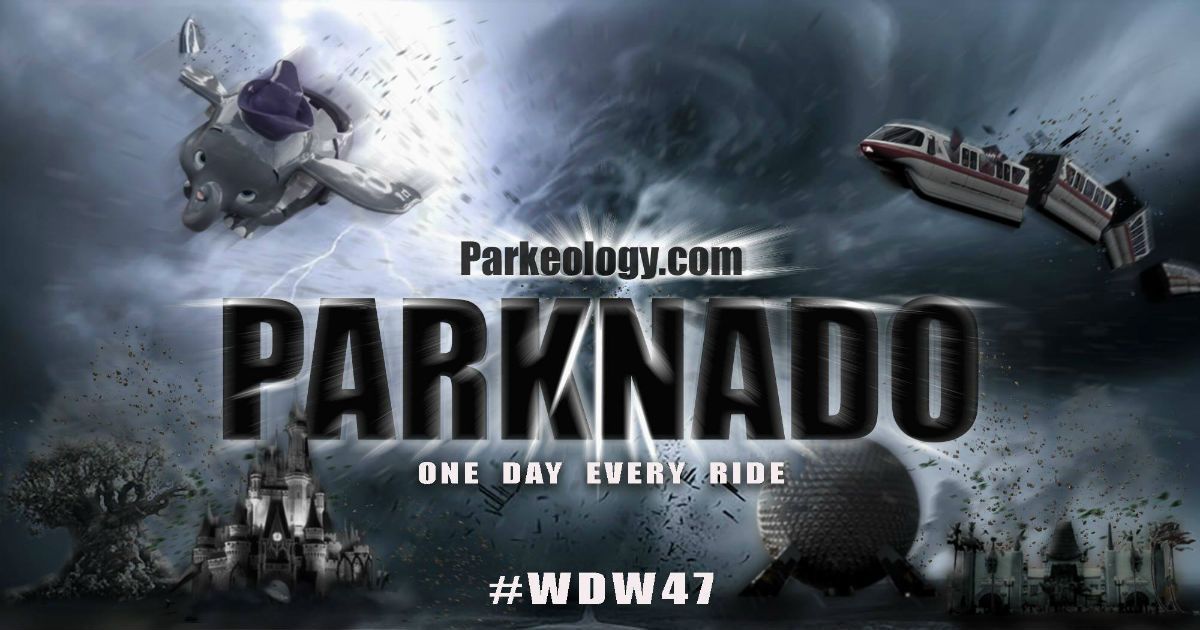 If you follow us on Facebook or Twitter, you know that a major storm is brewing for tomorrow. On December 6, 2017, a class-5 Parknado will be unleashed on the Walt Disney World Resort in the form of 15 separate teams — all vying to complete the Parkeology WDW47 Challenge to ride every ride at Walt Disney World in a single day.

Such a cataclysmic phenomenon is unprecedented in the history of the challenge. We’re hoping to get all the teams into the winner’s circle. We invite you to check in on Twitter to watch the chaos as teams dodge ride breakdowns, squeeze through tight FastPass windows, and frantically adjust plans on the fly.

If you’re not familiar with the most intense Disney theme park challenge on the planet, some of the lingo can be confusing. That’s why we’ve developed a glossary of terminology to help you talk like a pro at the Parkeology WDW47 Challenge.

Ted and Shane use this slang quite frequently in our role as official keepers of the challenge — as do all the other veterans, rookies, and fans alike. So study up, batten down the hatches, and get ready to ride out the first ever Parknado!

An official attempt at the Parkeology WDW47 Challenge. Sometimes there is no actual running during the challenge. But there should be.

The necessity of visiting the same park two or more times throughout the day in order to ride all of its rides. Teams may elect to do this for strategic reasons, like accounting for early closers and picking up Extra Magic Hours

This term refers to the Holy Grail of the challenge — completing with only three park hops. In this scenario, the team is able to complete an entire park in one shot before moving onto the next. This has only been attempted once in the entire history of the challenge.

“Grail” can also be used as a verb, referring to completing a park in one shot. This normally applies only to Magic Kingdom, which usually must be split to account for early closers. For example: “I grailed Magic Kingdom before moving on to Epcot.”

Refers to having such a large cushion of time, such that they could stop at Casey’s Corner for hot dogs and still easily finish the challenge. This is the envy of any challenge, since time is usually so tight that stopping for a meal is a pipe dream.

Much like free throws in basketball, this is when a runner has used their three advance FastPass reservations, and can now start picking up bonus FastPasses via the phone app or the kiosk.

All runs have at least a broad plan for the day, and most have a detailed script. An audible occurs when the runner senses an opportunity that is not in their plan and pounces on it. For example: “I was headed towards Adventureland, but saw that the Tea Cups had no line. So I called an audible and hopped on.”

Eye of the Tiger

The dogged determination that comes over some runners, especially late in the challenge. The day may be throwing all kinds of difficulties at them, but they are battling through.

This means that no matter how poorly a run might be going, completion is still technically possible, given the right circumstances. Usually, this means that all early closers have either been ridden or are still open.

A strategy for extending the operating time of a park. Disney will usually allow you to hop into line for an attraction right up until closing time, giving you several bonus minutes waiting in line after the park officially closes. This is useful for obtaining difficult rides.

The nickname for Primeval Whirl. Given because the ride itself is a spinning, jerky experience under the best of circumstances, and is usually encountered in the middle of afternoon heat after not eating anything all day.

How a challenger refers to the 40-minute spin on Ellen’s Energy Adventure. Alas, the nap is no longer possible.

When no tweets have been sent from a runner in a long period of time, leaving everyone wondering what happened to them.

Any ride that has a closing time prior to the official park opening. Most parks have a few rides that fall into this category.

Applies in any run where a team is late to enter Epcot. Teams may theoretically have time to ride all rides, but the Epcot early closers put a time squeeze on the run.

Nothing Wrong With That

When a team — usually two middle-aged guys — cram themselves into small kiddy rides like Dumbo. It can be up close and personal. And there’s nothing wrong with that.

An illegal form of park hop transportation, wherein a motorized Subway restaurant transmits the team from park to park, making hoagies along the way. Because this is outside assistance, it is grounds for automatic disqualification. But it doesn’t stop teams from dreaming about how nice it would be.

Stands for Automatic Fail. This happens when a run is attempted while a scheduled refurbishment is in progress. The team usually knows that full completion of the challenge is not possible during their scheduled run, but they want to try anyway for fun.

This term has come to mean any flippant excuse from disbelievers who don’t believe the challenge is possible in the first place: “Oh, they skipped Universe of Energy.”

It originated from a YouTube commenter who analyzed the timestamps in our original WDW46 video and simply could not believe that we made it to from Ellen’s Energy Adventure to Animal Kingdom in such a short time. But we did.

A perfect storm of over a dozen challengers, all trying to complete their run on the same day.

The Dream is Alive

Reflects any positive outbreak that occurs to get you on track when you feel discouraged. For example: “The posted 45-minute wait at Soarin’ turned out to be only 15 minutes. The dream is alive.”

A series of moves that a team is confident they can pull off, in spite of perceived difficulty. “We need to clear Epcot in 25 minutes in order to be at Studios by 9:30. Watch the magic.”

Making a bad ride selection simply because it is close. “Oh no! They fell into the proximity trap of riding Small World even though Space Mountain waits will never be shorter.”

Once you have used your initial selection of 3 FastPasses, the My Disney Experience app lets you pick up bonus FastPasses one at a time. As soon as you “tap” at the Mickey touch point to use your current FastPass, the app will allow you to grab a new FastPass, which you can then modify to a better time. Teams have mastered the Tap Grab Modify FastPass technique.

Similar to Time for Dogs, this is a team’s ultimate reward for finishing their run. It originated from our friend Kenny the Pirate, who tweeted out a shot of said sandwich from Flame Tree BBQ.

A conservative pick-up that may not be spectacular in the moment, but is intended to mitigate risk later. For example, riding an outdoor ride early in the day because of a brewing storm later in the evening.

In the Heart of Darkness

That point in the afternoon where the team begins to feel the exhaustion, the temperature is rising, and they are suddenly faced with the prospect of riding every jerky ride at Animal Kingdom.

Where quick thumbs and good wifi service allow teams to refresh their My Disney Experience app into a perfect FastPass, such as Frozen Ever After.

Disney’s most insignificant little ride is also the WDW47 Challenge’s greatest killer, since it usually runs for only an hour each day. Everyone hates the stupid Main Street Vehicles.

This is a form of cheating, where teams secretly line up extra FastPasses using friends and family’s tickets. Then they sneakily transfer them to themselves. Nukes are not allowed.

When a team uses FastPass to clear all FastPass rides in the park, without using stand-by for them.

A highly coveted virtual badge awarded by Parkeology for each park successfully cleared during the challenge.

A FastPass you have no intention of using, but is held to fulfill FastPass requirements or in hopes of moving it to a better ride later.

The correct Challenge way to ride the Mad Tea Party