Pop culture’s most iconic characters debuted in that decade. We got Jabba and we got Ewoks. And Indiana Jones (three times). The Ghostbusters materialized. So did Marty McFly and Biff. The Goonies were good enough. E.T. phoned home.

The list is endless. Freddy, Rambo, Predator, RoboCop, John McClane, Terminator, Ninja Turtles, and the WWF. Half of us loved K.I.T.T. The other half loved the General Lee. All of us loved Lou Ferrigno.

And every Hollywood movie — from Raiders of the Lost Ark to Harry and the Hendersons — immortalized their beloved characters with a custom set of collectible foil-wrapped, gum-sticked, randomized trading cards. 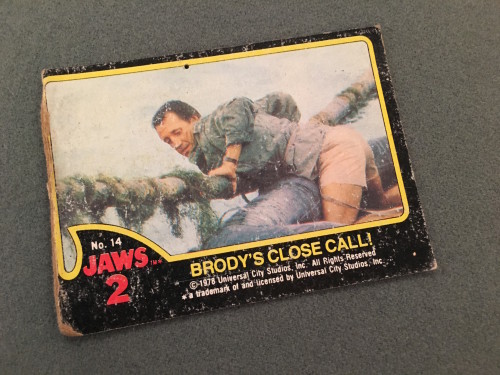 They were available on every grocery store end-cap, right where mom had her wallet out. The best were loaded with action poses from our favorite movie stars. The worst featured the cast of Growing Pains.

But we loved them.

Disney had dabbled in trading cards before, including a set for their 1979 sci-fi flop, The Black Hole. But by the middle of the 1980s, newly-crowned Disney CEO Michael Eisner (who would later go on to buy the Topps Trading Card Company) was in the midst of asserting Disney’s dominance at theme parks. 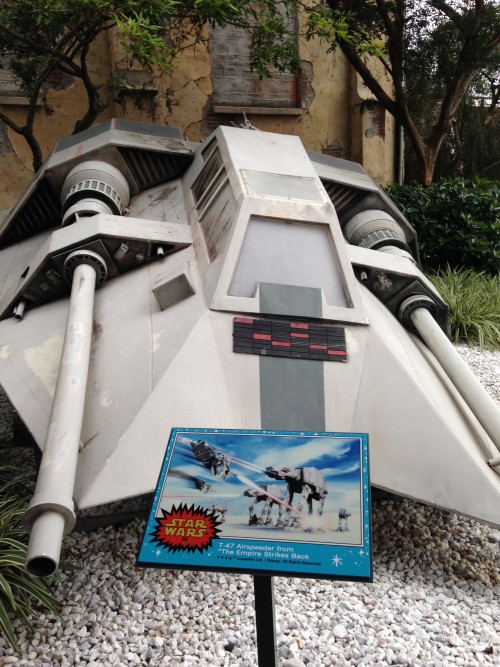 The 1980s would see the number of parks more than double worldwide, with the addition of EPCOT Center, Tokyo Disneyland, and the Disney MGM Studios.  And by happy accident, somebody in the Consumer Products division was turned loose to design a new deck of trading cards, one that featured the parks in all their glory.

It was called The 50 Greatest Park Characters of All Time.

The self-styled “Series 1” trumpeted the uniqueness of park-specific characters (movie characters like Brer Rabbit or Mr. Toad didn’t make the list). It was never clear just what criteria they used to define greatness, but the final deck seemed to reflect a mix of historical importance, forgotten scene-stealers, and sheer lovability. As one Disney wiki described it:

Disney theme parks come alive, thanks to the performances of great characters. Now you can collect a keepsake of these park heroes for your very own! Each character is unique to Disney theme parks, appearing in your favorite attractions around the globe. Keep them for your own or trade them with your friends!

I collected these in my youth, mainly acquired during yearly trips to Walt Disney World, or more frequently at the Osco Drugs store. I looked forward to each unopened pack with breathless anticipation. I treasured every new card, grumbled at finding yet another duplicate, and even cut my tongue trying to chew the brittle stick of gum inside every pack.

There were 50 possible unique cards, but my collection puttered out around 35 — of which a full 17 were duplicates. I had the worst possible luck when it came to this set. Around the time of my sophomore year, I got rid of the duplicates, wrapped the remaining 18 unique cards in a rubber band and shoved them into my desk drawer, where I promptly forgot about them for the next ten years.

Flash forward to the late 90s. I’ve become pretty good friends with a guy from Chicago named Ted. One night we get to chatting on AOL, and the subject of the cards comes up.

And it turns out that I am not alone in the world.

Ted had done his own collecting, in much the same manner as myself. He had 20 unique cards, stored away in clear plastic binder sheets. We compared and found that between us, we had 30 of the possible 50 cards.

What happened next was a great quest, as the two future Parkeologists pooled their resources and scoured the globe. eBay was the obvious choice (and we got most of our cards that way), but there was also a comic store in Michigan, an internet friend from California, and incredibly, a next door neighbor who was a former Cast Member and just happened to have three rare cards we needed.

I am pleased to announce that as of last Christmas (thanks to a special relative who answered the call — you know who you are!), the Parkeology collection of the 50 Greatest Park Characters is finally complete.

As far as we know, the entire set has never been presented online. We debated posting them all at once, but thought it would be more fun to dole them out 5 at a time, as if you the reader were collecting them yourself. So expect a few more weeks before you see them all.

Here, without further ado, is the first card I ever got. 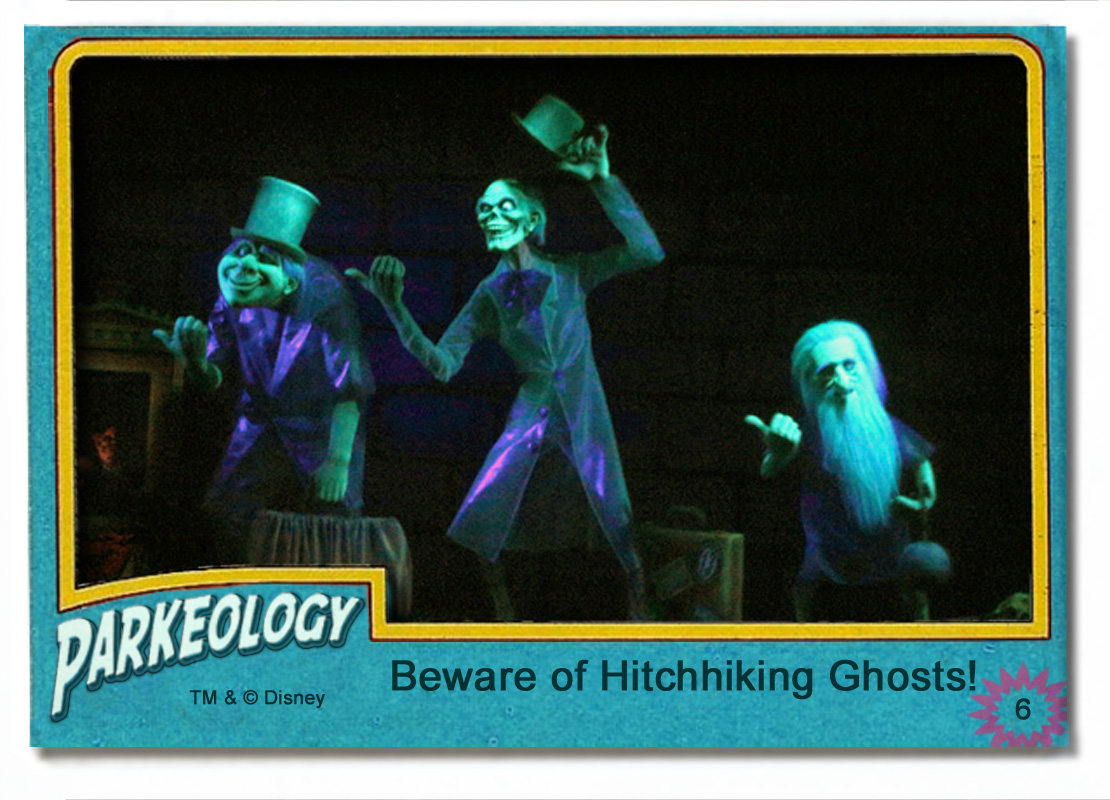 You can’t go wrong with Hitchhiking Ghosts. You’ll have to forgive the quality of the scan. This thing is 30 years old and has been tucked away in a drawer.

The other nifty thing about this set is that each card came with its own trivia section on the back, like baseball card stats. The factoids tended towards the humorous side, but also contained valuable information about the character’s history. 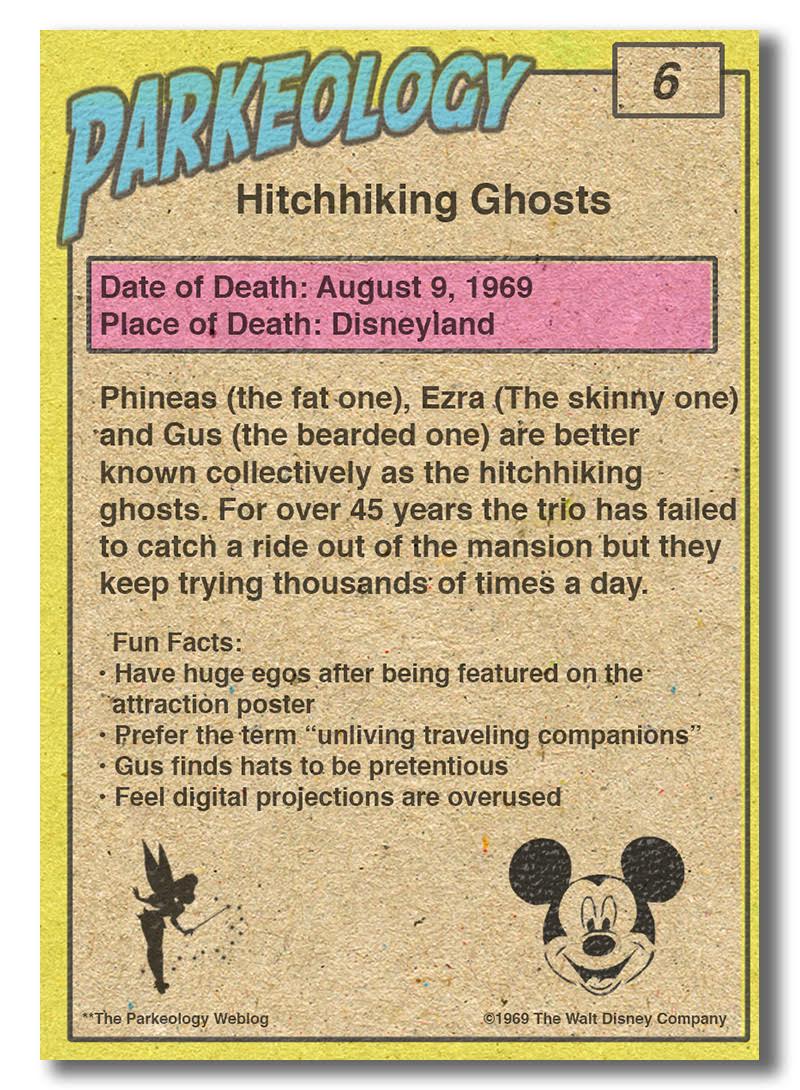 Here’s a more recent addition to the collection, sniped off eBay for a mere 5 bucks: 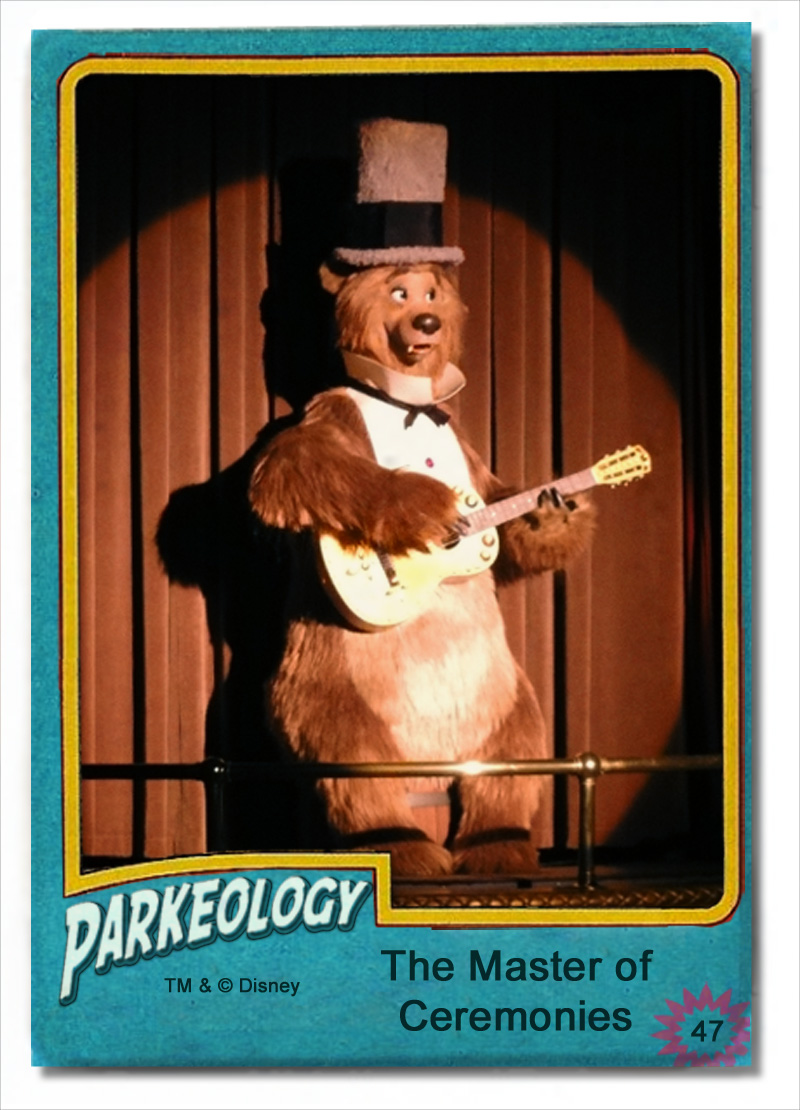 Henry may not be the most beloved character from the Country Bear Jamboree, but there’s no denying his importance. He deserves his spot on the list. And for those of you anxious to see the backside of bear…

Now the next card on our list is probably completely unfamiliar to the average park guest, but I guarantee that if you’re reading this blog, you know who he is: 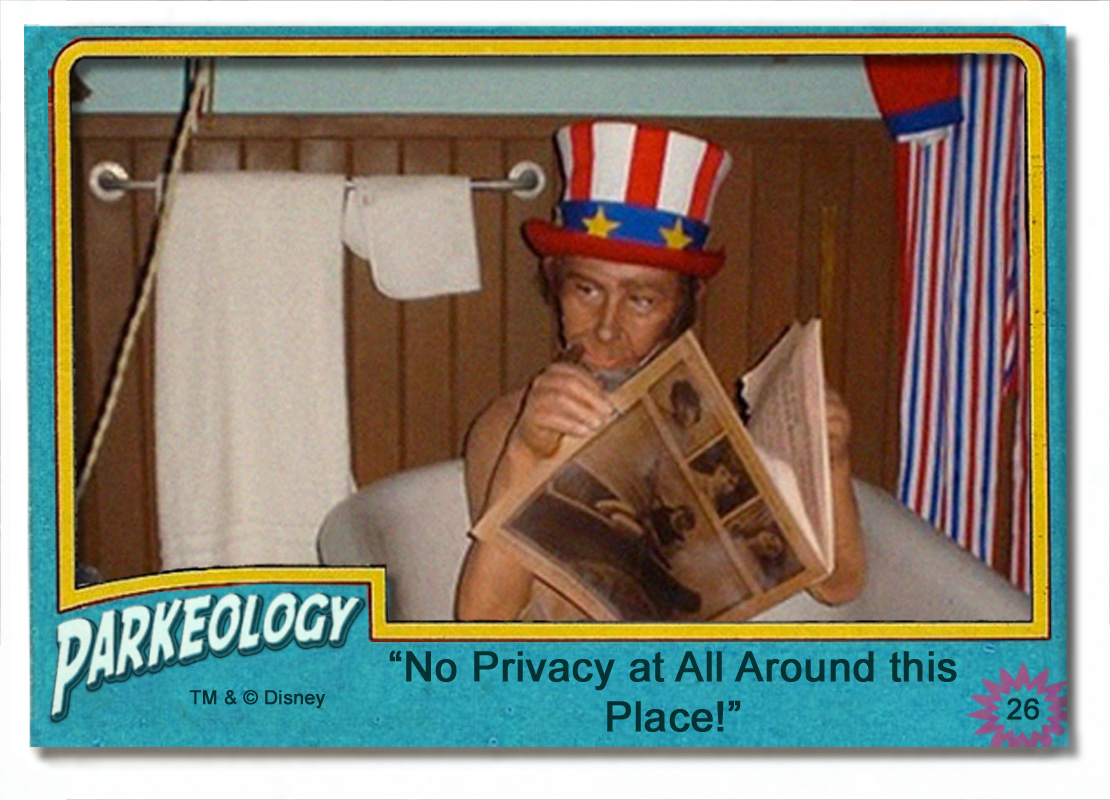 We were able to track down Orville thanks to our friends at Imagineering Disney. It’s interesting to note that while the series favored a portrait layout, it did sprinkle in a few landscape cards from time to time. And as for Orville’s backside (“No privacy at all around this place!”)… 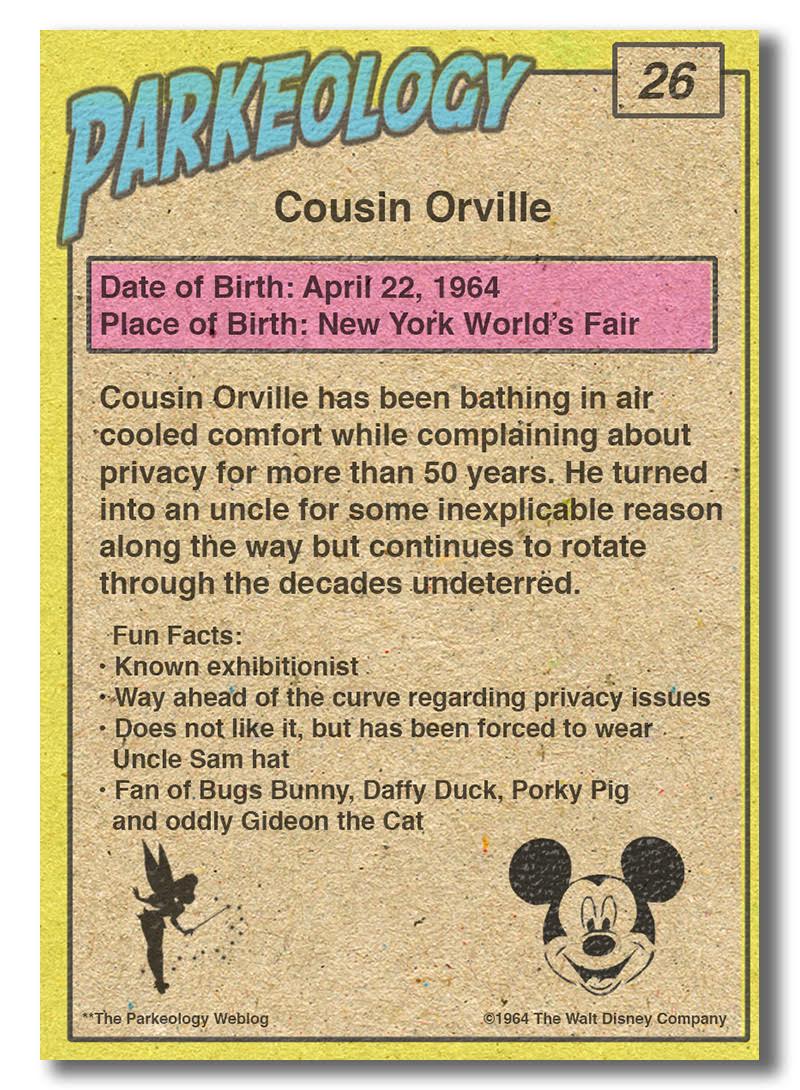 This next card is one of the things I love about this set. You get the obvious ones, as well as the ones that are kind of familiar. But you also get a few that have been lost to the vestiges of time. 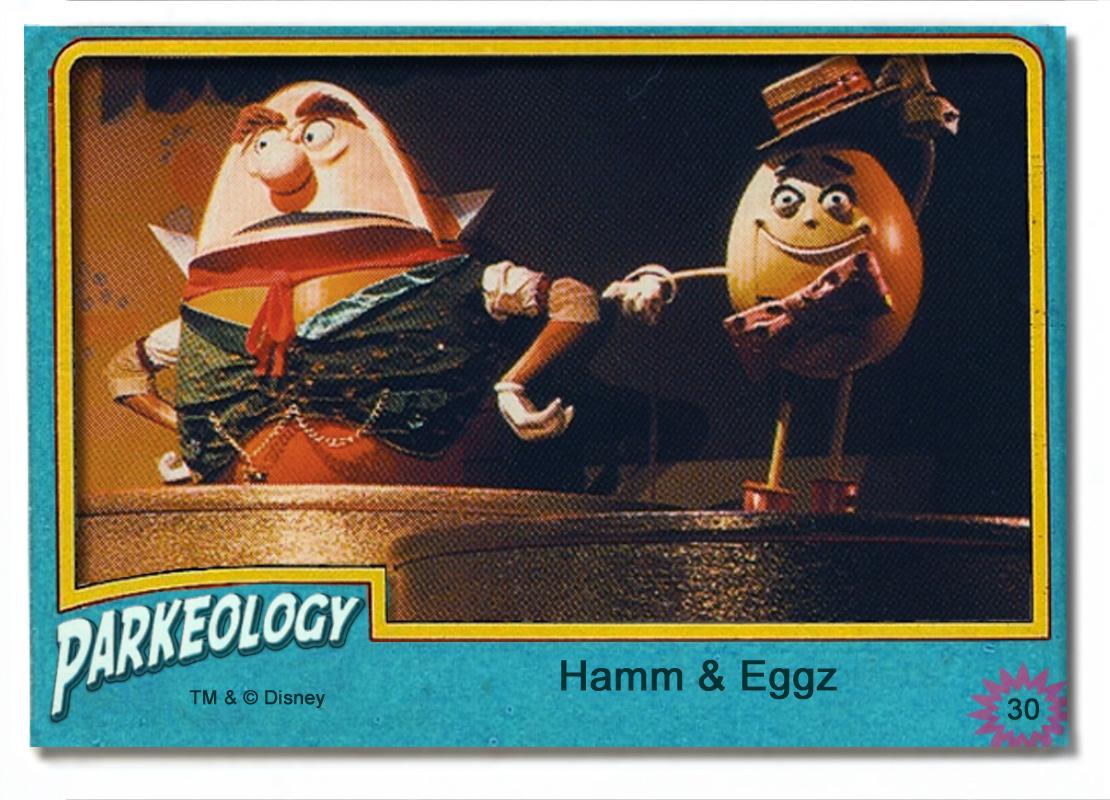 Kitchen Kabaret was relatively new at the time the card was released. But an entire generation has grown up without the experience of watching robotic food perform vaudeville comedy about good nutrition. Perhaps a history lesson is in order: 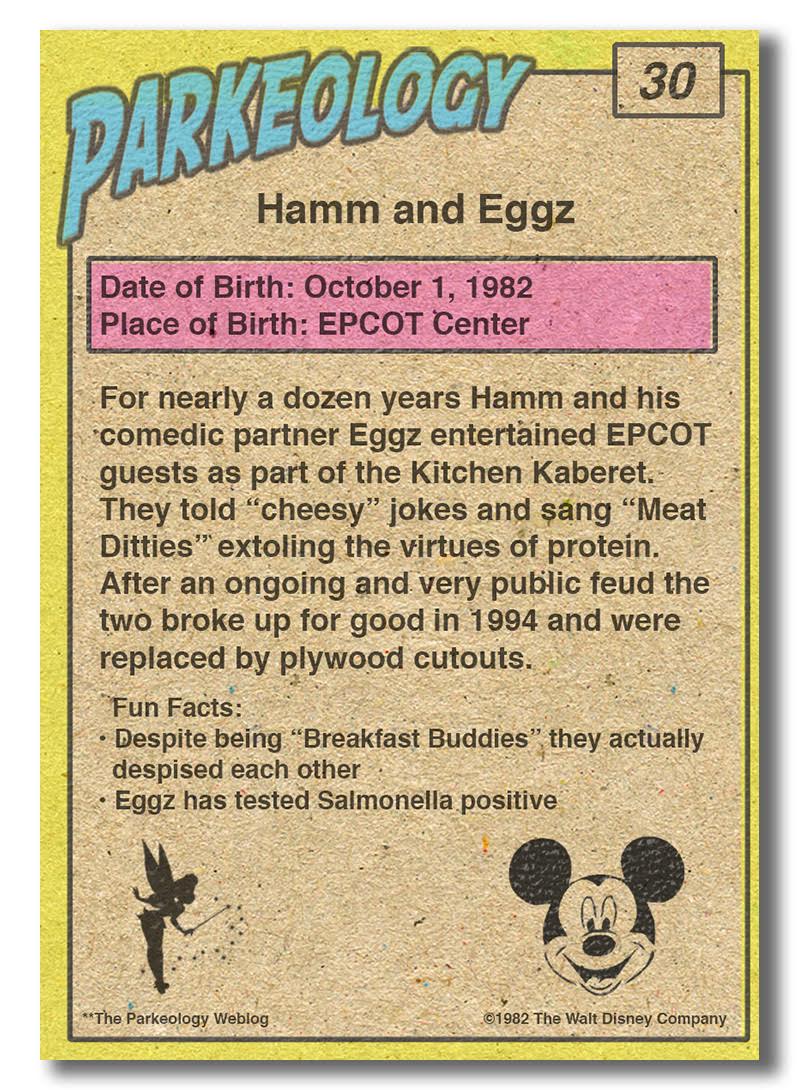 And finally, I’ll end this week’s installment with one of my personal favorites. 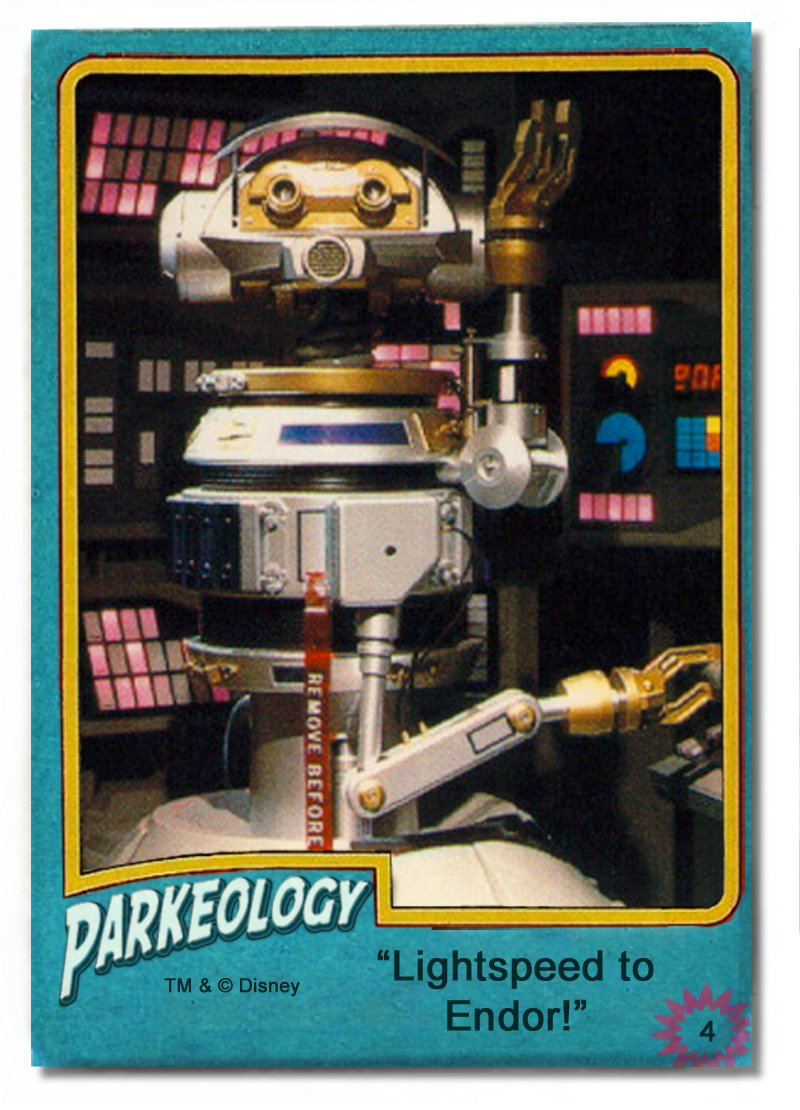 Star Wars is still big business, and Captain Rex clearly has earned his spot among the all-time greats, as the card back shows. 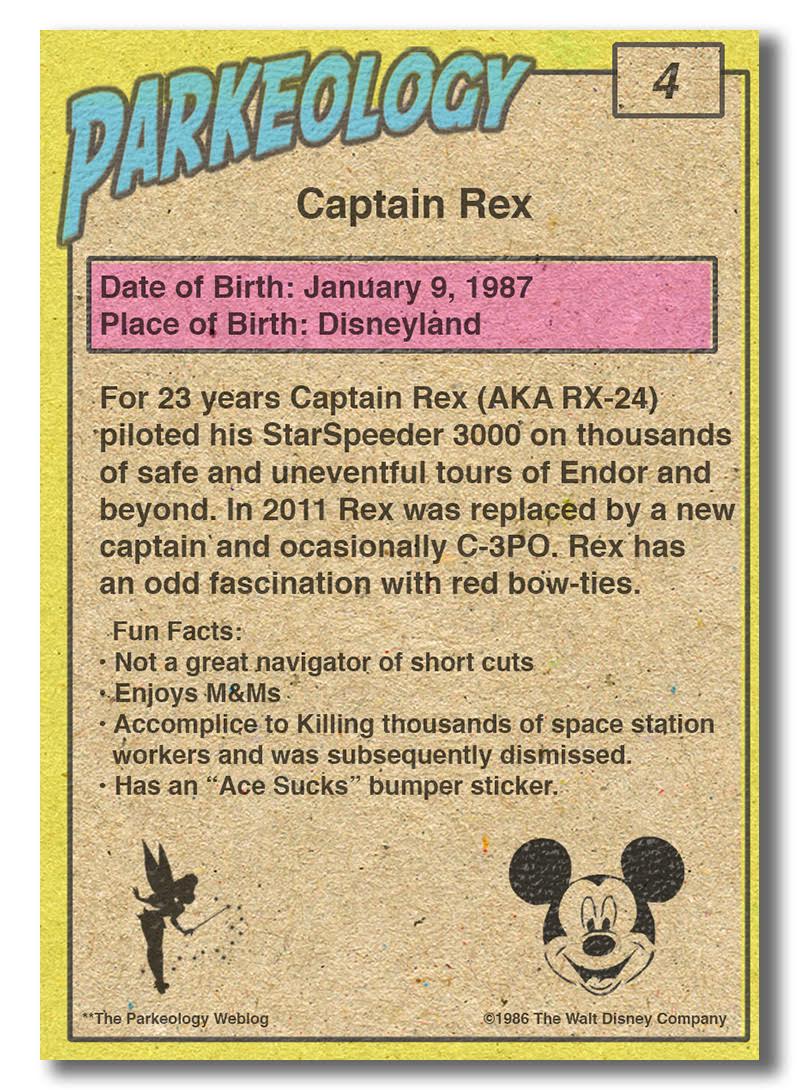 And just like that, we come to the end of this week’s pack. You can try the chewing gum, but I don’t recommend it unless you have dental insurance.

Next week, Ted will share 5 of his favorites. Until then, hold on tight to these guys and don’t trade them for anything, not even a vintage Tron card. I hear those things are easily faked and don’t hold their value.