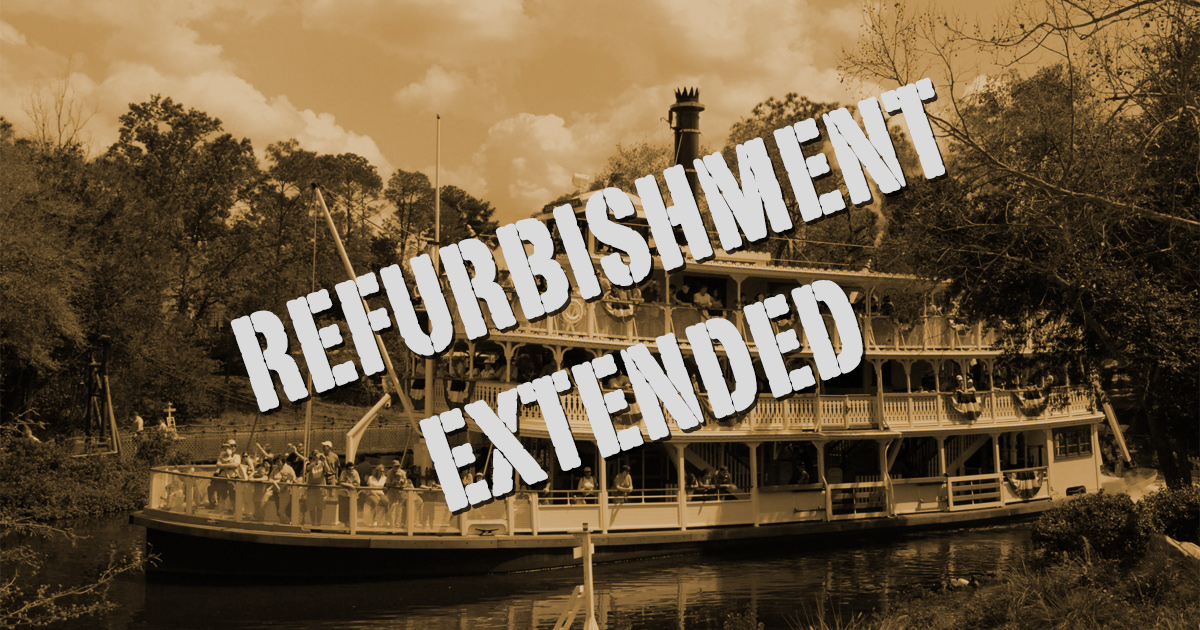 Early this year, the Liberty Belle Riverboat went under refurbishment, putting successful attempts at the Parkeology WDW47 Challenge on hold. With the opening of Toy Story Land last weekend and the dawn of the WDW49 version of the challenge, many of us have been anxiously awaiting the Riverboat’s return on July 20th.

Unfortunately this morning, Disney dealt the WDW49 Challenge a major blow by extending the Liberty Belle Riverboat refurbishment through August.

Through no fault of anyone, the challenge instantly became an autofail situation for 38 teams that had signed up for the challenge. Many teams have been planning for months. Tickets were purchased. Hotel bookings made. FastPass reservations set. And just like that, the rug has been pulled out from under us all.

We’ve heard from many of you already asking if there’s anything that can be done. Here are our thoughts.

We are highly sympathetic to the teams that registered. We’ve been here ourselves. In the very first attempt at WDW47 in 2013, heavy rain shut down AstroOrbiter and Tomorrowland Speedway. We proved that completing the challenge was possible — even rode 3 duplicate rides — but did not actually reach the finish line on that first attempt.

A year later, we decided to make another run. We analyzed the park hours, picked a date, made hotel reservations, booked Ted’s flight from Chicago. We were all set to go.

Mere weeks before the date, Disney dropped a refurbishment onto the calendar (I think it was the Walt Disney World Railroad). Just like that, our plans went up in smoke. We had to postpone for a month, after which we became the first team to complete the challenge and kickstarted the Official WDW49 Challenge that we track here today.

When it comes to theme park operations, fate can be cruel. There are factors entirely out of our control. Not only did thunderstorms shut down the last 2 rides we needed in 2013, but operational issues in the new Frozen ride kept us one ride short of success in 2016. In 2015, Rock n Roller Coaster broke down the day before our run. They didn’t deliver the part it needed until several days later. Later that year, several teams showed up to perfect weather, low crowds, and dream hours, only to find some Disney Channel star recording a Christmas special in the middle of Main Street, canceling the Main Street Vehicles for the day. On another attempt, a father/son team was left standing in line for Seven Dwarfs Mine Train when the ride closed unexpectedly right before park closing. They missed by one ride.

It does not get any worse than standing in a line for a broken-down ride at the end of a grueling 17 hour day, knowing that if not for fate, a clip-art trophy on a niche website would be yours.

Why the Challenge Will Remain WDW49

As we’ve always stated on our official rules page, all rides must be operational and duplicate rides don’t count. The challenge is all or nothing. That’s why we don’t care about ride count. We may call the challenge WDW46 or WDW49, but you still need to complete 100%. The variables may change. Disney adds express bus transportation or they close a 40-minute long Epcot traveling theater or they open Slinky Dog coasters. The challenge remains the same.

One day. Every ride.

There are many arguments in support of these ideas. Over the years, we’ve thought long and hard about this. We hate that people’s plans get thrown into turmoil. We have become good friends with many of former and future challengers who are just as obsessed with this thing as we are. The last thing we want is to see them disappointed.

But part of the challenge — in fact, the best part — is dealing with all the hidden variables. The Riverboat is a great example of this. It’s not at all like most rides. Here is a ride that runs for limited hours during the day, usually in an 8-hour window. It’s 20-minutes long, far longer than most rides. It’s the only ride that runs on a consistent schedule — top and bottom of the hour. Unique rides like this are part of what makes the challenge so great. To simply omit the ride because it is temporarily closed removes the appeal.

We can’t justify changing the rules when past teams have already dealt with this unique ride and future teams will still have to do so.

We’d have to make an exception for every other ride that goes into refurbishment. What about that time earlier this year when massively popular Flight of Passage and Navi River Journey both closed unexpectedly for several days? Or when concrete work occasionally shuts down the Main Street Vehicles? We just can’t see how it would keep the challenge pure.

There’s actually a solution to all this that might seem breathtakingly easy.

If anyone is disappointed, if they’ve already planned the trip, if they were really, really, really looking forward to their attempt…

What’s the worst that could happen? You’ll spend all day at Disney World, riding tons of rides, experiencing the parks like never before. If you want to, you can even tweet out your progress as per the rules of the challenge and experience the thrill of having hundreds of strangers on the internet cheering you on. You’ll feel all the same highs and lows. You’ll call an audible on a ride and score a great pickup. Some ride will break down right when you need it. That impossible FastPass will magically appear on the app. The Main Street Vehicles will openly taunt you.

At the end of the day, if you’ve ridden all 48 open rides with a half hour leftover for an imaginary Riverboat trip, wouldn’t that feel great? Isn’t that a story you could tell all your friends?

Here’s what you would miss out on: A clip-art trophy next to your name on our website.

People sometimes ask why we even bother to track the autofail attempts. This is the reason why. It’s cliche, but we truly believe that running the Parkeology WDW49 Challenge is more about the journey than the destination. Not everybody can plan their life around the perfect challenge date. Not everybody has the physical stamina to actually power through brutal heat across marathon-like distances, experiencing every twisting, turning, stomach-churning thrill ride in Walt Disney World. It’s about testing yourself, solving problems, spending time with your teammates if you have any or enjoying the solitary pursuit of a solo run.

Even though we’ve had several teams do official runs during autofail conditions over the years, not a single team has ever managed to ride even all the open rides on those days. It has never happened. The challenge is that difficult.

So you can wait until September and hope that Disney doesn’t extend the Riverboat refurbishment again. Or you could run. We can track you on our board if you like, or you can just do it quietly for yourself.