I love a good roadside attraction, and as it happens, there’s a pretty cool one not too far from Walt Disney World.  It’s called Spook Hill, and the idea is that if you park your car on Spook Hill and put it into neutral, your car will roll uphill!  You can find these sorts of gravity-defying phenomena all over the U.S., usually blaming it on an Indian curse (Indians sure did curse a lot).

But this is a Disney parks blog, not a roadside attraction blog, so what is the point of bringing this up?  Well, for one thing, I dig this kind of stuff, but more to the point, there is a spot in the Magic Kingdom that has the exact same phenomenon.  Spooky, right?

I don’t have a picture of it for a couple reasons.  A) it’s inside a cave and the lighting isn’t too great.  B) It’s hard to show something moving uphill in a still picture.  But if you go to Tom Sawyer’s Island on the third Monday following the winter solstice, stand outside the Magnetic Mystery Mine, and chant the secret chant three times (“Injun Joe loves Bloody Mary”), you too can experience the supernatural.  Enter the cave and proceed to a dimly lit area where you’ll find water trickling on the ground beyond a wooden railing.  The water will be running uphill!

Note that this also works on any day of the week before or after the winter solstice, thanks to a bit of Imagineering trickery.  But don’t forget the chant. 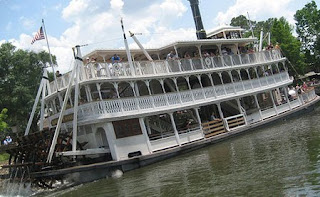