Back when Disney’s Hollywood Studios first opened, there wasn’t much to it.  Sure, the park was only slightly smaller than the Magic Kingdom, but if you looked at the map, you’d see that it fully half of the real estate was taken up by something called a “Backstage Tour.”

Yes, this was a hearkening back to one of Walt’s original ideas of a Studio-based park (and had absolutely nothing to do with Universal Studios’ Orlando invasion.  Really.  No relation whatsoever.  It was Walt, I tell you!).  Walt, you see, has thought up every Disney project ever.  He sketched up the plans to the “Disney Princess Hair Salon” while on a train ride through Missouri, and his Last Will and Testament gave explicit instructions to set a TV musical inside a High School.  You have to hand it to him, the guy was way ahead of his time. 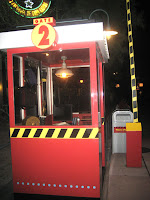 Anyway, younger guests might not realize it, but when this park first opened, the guest-accessible areas literally stopped at the Great Movie Ride, sort of like if the castle was the back of the Magic Kingdom.  You could venture into the Animation Courtyard to the right, or to the Indy stunt show on the left, but that was it.  Everything else was closed off unless you were on the Tour.  If you look closely at the map segment above, you can see barriers preventing access to Star Tours (still under construction), and another one preventing access to the breezeway which now houses the ABC Commissary. 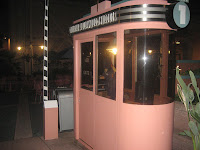 Of course, now tourists can roam anywhere they darn well please, and nobody has filmed a movie at the park since Ernest Saved Christmas (which Walt wrote the script for).  The barriers are long gone.  Or are they?

Turns out there are some nicely themed Studio Gates still in place at both locations.  They’re in plain sight, but very easy to overlook.  The surprising thing is, these things are themed to be as boring as possible, a bit atypical in a park where even an unassuming rope in a well can surprise you with a trapped member of Monty Python. 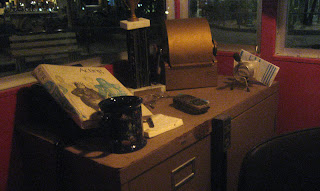 Between them, they have exactly one visual gag:  Gate 2 (the Star Tours location) has an acting book lying on the desk, obviously for the guard to improve his craft (or maybe just land a job at the Great Movie Ride).  Both locations also have Compaq desktop computers with floppy drives, a subtle reinforcement of the Gertie the Dinosaur theme.  Both booths also inexplicably have copies of the same dictionary.  I guess Studio guards spend a lot of time writing screenplays, and it’s a sure bet those Compaqs can’t run a spellchecker. 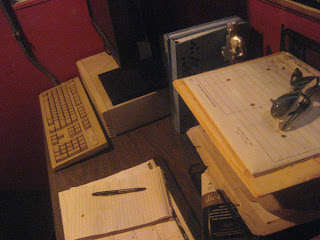 I wonder what the definition of “dictionary” is?

Next time you’re in the park, you can feel like a star as you walk to Muppets or eat overpriced burgers at the Commissary.  You’re through the gates, baby!  Remember me when you get to the top. 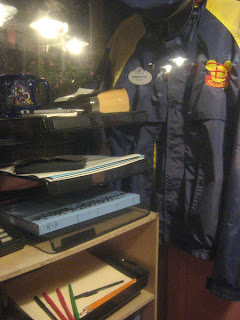 Guard 1’s name is Samantha, so says the nametag on her jacket.  If she is like other Disney security guards, chances are she is a 65-year-old woman with several eye restrictions on her driver’s license.