Well you cannot turn on the news today without talk of Tiger this or Tiger that and we here at Parkeology.com are not immune to the salacious speculation of what exactly went wrong with Tiger. 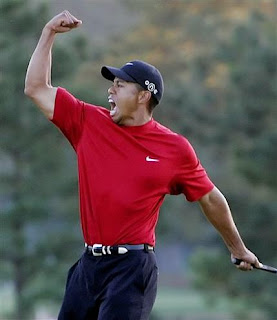 Me strong, you pretty…
Of course our Tiger is not THE Tiger… our Tiger is what was once known as Tiger Rapids Run at the Animal Kingdom and is now known as Kali River Rapids. 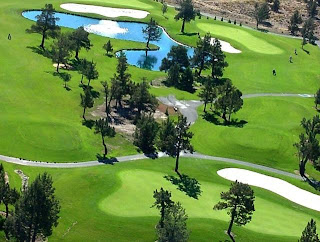 I think I just saw a tiger!
When Animal Kingdom opened in 1998 there was no Asian section but there were big plans.  The cornerstone of those plans was an aquatic version of Kilimanjaro Safaris, a water ride that would take guests in large rafts on a meandering course throughout all of the Asian area.  Along the way guests would pass through Tiger habitats as well as several other species and eventually shoot the rapids for a thrilling climax. 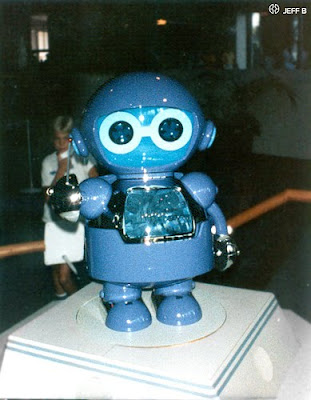 Come on, she is HOT!
I’m not sure that THE Tiger was going to be a part of it but I do believe an advanced audio-animatronic figure of the golfer was being created before he cheated on his robotic wife and ran off with SMRT-1 but that is a different story. Plus who can blame him?  Have you ever seen such a smooth blue shell, who could resist that? 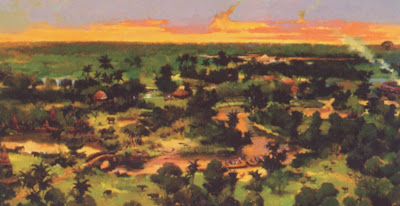 Look closely, there are rafts in there.
Anyway this rapids attraction was going to be spectacular.  It was to be a combination of something similar to the current Tiger viewing areas combined with elaborate waterborne sets and raft thrills far beyond what one could find at a local Six Flags. Like it’s sister attraction in Africa the Tiger Rapids Run would have been a long attraction taking up a huge amount of space. 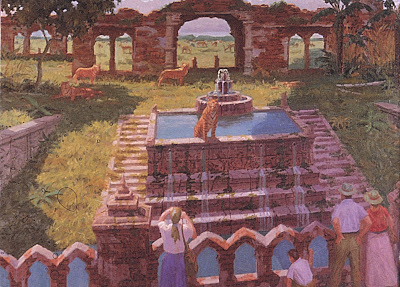 Look at these large openings in the rail, it’s almost as if I could fit right
through and….AHHHHHHHHHHHGGHHHHHHH!!!!!!!
Yet when Kali River Rapids eventually opened in March 1999 it in fact closely resembled something directly lifted from a Six Flags. Gone were the custom made rafts replaced with the exact same 12 seater round rafts that are a staple at many local parks. 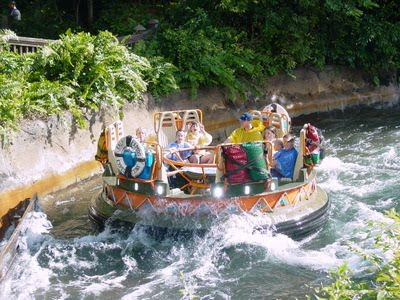 You spin me right round, baby
Right round like a record, baby
Right round round round
Gone was the long and meandering trip throughout Asia (the current layout fills but a small fraction of the original space set aside for the attraction).  But what hurt most was that the tigers were also gone. What was conceived as an animal encounter from a very unique vantage point became something closer to a botany field trip down a bumpy stream. 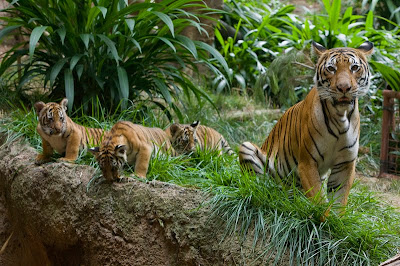 Ah, what might have been.
What we did get was a fairly generic and uneventful excursion through some nicely landscaped areas with one big drop and a slash and burn fire scene that most guests don’t seem to understand. 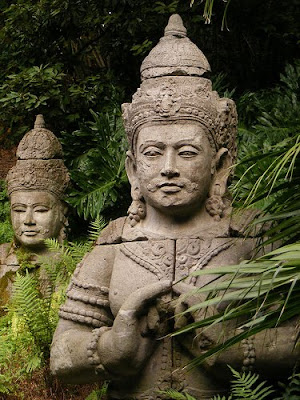 Kali is the traditional Thai Goddess of budget cuts.
We got a very heavy handed yet still confusing story line about the need to protect our forests from the type of logging we briefly see on the ride. Finally we got a lot of gloating from Universal fans who somehow claimed that the charmless and hideously ugly Popeye themed raft ride at Islands of Adventure was superior. 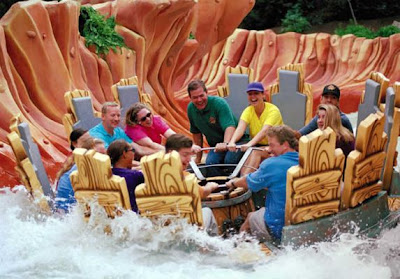 Even the most carefully orchestrated publicity photo cannot hide
just how ugly the Popeye ride is… but it does get you good and wet baby!
However we also got an exceptionally well themed queue, a very well landscaped attraction and a generally enjoyable if neutered experience.  It is not what it could be or even should be, it is short and it is lacking in much of the charm the best Disney attractions are known for.
There is still one tiger that made his way into the attraction as well. See if you can spot him as we continue with our exclusive video tour of Animal Kingdom.  This video showcases the beautiful queue (which may in fact outshine the actual ride), the over arcing storyline and the all too brief raft trip itself.