Sitting at the Meridian bar aboard the Disney Dream my father and I are contemplating ordering an extremely expensive glass of Louis XIII “Black Pearl” cognac.

This is interesting for a number of reasons. First of it costs $1,200 a shot, and that’s considered a bargain. Yes, TWELVE HUNDRED American dollars for one tiny shot (though served in a huge glass no doubt). Secondly when it comes to drinking I’m a total lightweight so it would be completely and totally lost on me. Finally because it is shocking that a Disney owned family oriented, mainstream ship would even have such a thing available. 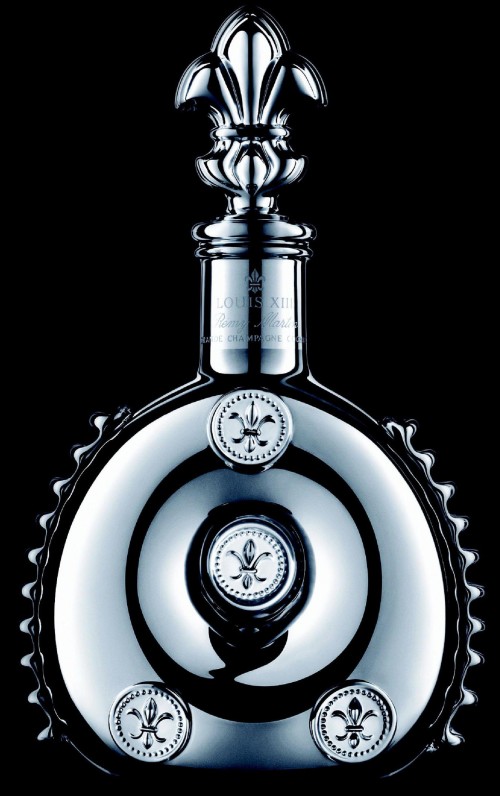 A bargain at twice the price.

Ivana works the bar, she (like most of the crew) is not from the U.S. Ivana was born and raised in Serbia. The cruise industry has given her a chance to see parts of the world otherwise inaccessible to her and has allowed her to better herself along the way. Her partner at the bar is Ivan and oddly enough Ivan too is from Serbia. Perhaps the strangest part of this is that it is not a bit, not a set up, not a Disney created back-story. This is not “Victoria and Albert’s” (the fanciest restaurant at the Grand Floridian Hotel) where the servers nametags used to all read either “Victoria” or “Albert” regardless of their given birth names (fortunatley this silliness was put to rest a few years back). No, these are real people who just happen to share the same name and hail from the same country. When I mention Victoria and Albert’s and joke that the bar shoudl be called “Ivana and Ivan’s” they look at me with blank stares, it is obvious that they have never been to the Grand Floridian or to any Disney venture outside of the ship for that matter. Fate brought them together working at the highest end bar aboard the highest end Disney ship and together they tag team my dad and I in hopes of pushing a couple shots of the highest end liquor on board. 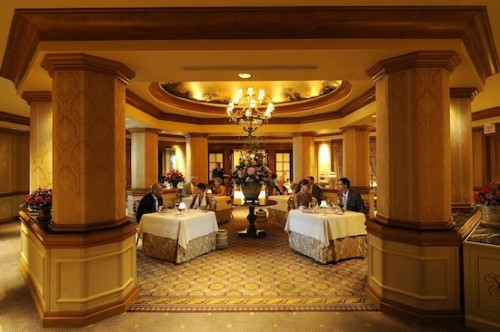 Nearby the AquaDuck snakes itself around deck 11, it’s elevated perch brings it closer to the height of deck 12, the same deck Meridian is on. While not exactly thrilling the much-ballyhooed water coaster had my daughter enthralled and wanting to ride it over and over again. Two people per rafter slosh through the plexi-glass tubes on a meandering tour of the ships perimeter. For now it’s unique to the Disney ships and is about as far removed in tone and intent from the Meridian lounge as one could possibly be. Swimsuits, splashdowns and cartoon ducks, my daughter liked it here. 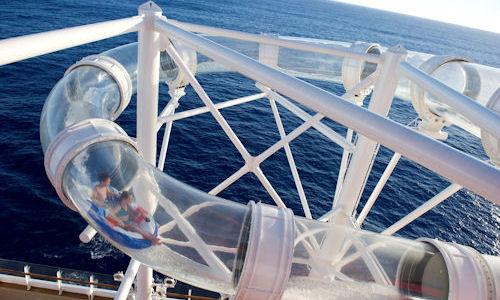 It looks faster than it is

The Meridian bar is situated between Palo, the decent adults only Italian restaurant and Remy the extremely good (legit good, not just cruise ship good) fine dining establishment. They sell things like $26 cigars, very well made dirty martinis with blue cheese stuffed olives (the cheese being poached from Remy next door) and apparently shots of cognac that go for the price of a used car. The décor is understated and clubby. Thickly padded leather chairs, inlaid wood floors, granite bars and not one cartoon character in sight. Located at the extreme aft of the ship the passenger accessible outdoor patio space offers spectacular views. There are no kids to be heard, no forced fun parties to attend and no lines to queue up in. If you didn’t know that this was a Disney product you never would know. My father liked it here. 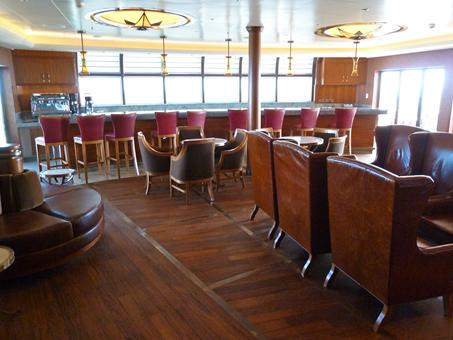 No Shoes, no Shirts, no Wallet… No Service.

Every night after dinner he would venture upstairs to the far end of the bar. He’d chat with Ivana and Ivan and he would long for that $1,200 shot trying in vain to find a way to justify its purchase. Instead he would “settle” for a $45 glass of Hennessy Paridis, an extreme luxury in it’s own right. I would join him most nights but I would also venture out on the aft deck where groups of Disney Cruise regulars would gather each evening. I got to know them a bit, which was a pleasant surprise. Just as my dad made friends with Ivana I made friends with several of the regular cruisers. It was an unexpected phenomenon. Being trapped on a boat for a week, even though the boat is huge and holds thousands of people, it is surprising how often you see the same folks. Having shipboard buddies was not anything I had anticipated or even had heard of yet it was one of my favorite aspects of the trip. 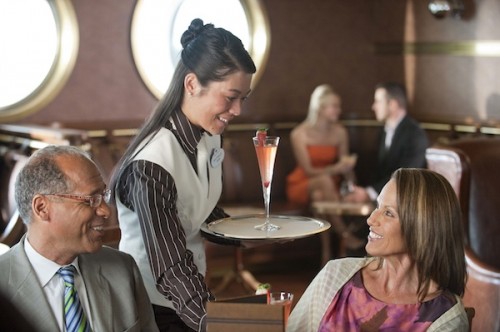 This is not Ivana, but Ivana does have dark hair and did wear this costume, so lets pretend it is her. You may also pretend that the to models are my father and I… but thats REALLY stretching it.

In talking with my newfound friends I learned that some had been on many Disney cruises. Not just one or two or three but maybe eight or nine or a dozen. Some had no children at all and chose to repeatedly cruise with Disney simply because they enjoy it (of course some of these folks may also have the Minnie Mouse shower curtains that I love so much). It’s hard for the cynic in me not so scoff at these folks. I mean of all the things you could do you choose to take in essence identical cruises time and time again? Are they mental? Are they scared to do other things? Are they just crazy lazy? Then I thought about how many times I have visited the parks. I thought about how many trips I have taken to see the latest and greatest Disney attraction. I thought that to a non-Disney park fan I must appear mental.  So OK, I can cut the multi-cruisers some slack. I’m not sure that I would want to join them on a quest to become super platinum level Cataway-Club Disney uber cruisers but I get it… sort of.

Disney being Disney knows how to leverage their assets… for every “adults only” venue decorated in muted shades of brown and taupe there are two plastered withcandy colored depictions of Nemo or Mickey or, in the case of the AuqaDuck, Donald and his clan. Prominently featured sticking out of one of the decorative smoke stakes near the AquaDuck are the larger than life legs and hindquarters of Donald. The story goes that Donald got blasted so fast through the still under construction tubes that he imbedded himself headfirst into the side of the ship. All my daughter saw was that he had no pants, and no private parts either. 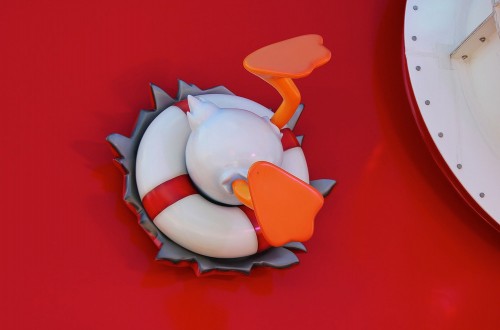 Back at the Meridian each nights solicitation of the Black Pearl cognac grew stronger and stronger. It went from a simple acknowledgement of its existence (dramatically displayed in a back-lit case at the bar) to an offer for us to keep the custom made crystal glasses they serve it in (a $300 value each we were told). Eventually we were offered the remaining contents of the bottle (regardless of how much was left), the glasses and the empty bottle itself. They are supposed to take the names of anyone who has ordered a glass and when the bottle is empty have a drawing to see who gets to keep the bottle (a hand made Baccarat black crystal extravagance). There are just 750 or so of these that have ever been produced so the empty bottle is worth a lot. Think about this… the boat was just over a year old, assuming the bottle was full at launch, and there are only a couple of shots left, means that about 14 people had already ordered these drinks prior to our trip. Disney’s quest to get people spending seems to be working. Maybe you prefer an endless supply of Diet Coke… you are covered as well. 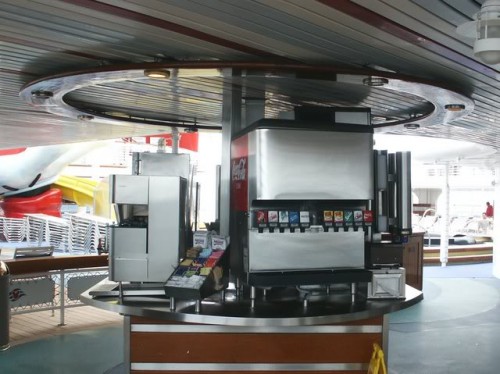 Does not dispense fine cognacs.

Disney has managed to create a ship in which not more than a couple hundred feet from one another is a self serve, all you can drink, 24 hour soda dispenser, a family water slide and a bar offering some of the rarest and most expensive cognac in the world (Did I mention that a bottle of “Black Pearl” costs about $15,000… but it is so rare you can’t find a bottle to buy anyway so don’t worry about it). Each seems a world away from the other and yet they coexist on the Dream.

This dichotomy of “experiences” is a recurring theme on the ship. Disney has tried very hard to offer everything to everyone, even at extreme ends of the spectrum. I was happy to see this, not necessarily because I like one side of the scale more then the other but rather because I had the option to choose. My dad got to hang at a fancy bar and dream of crazy drinks, my daughter got to hang at the AquaDuck and get anatomy lessons on anthropomorphic water fowl and I got to spend time with both of them. I’m not sure that either option woudl be their first choice if given unlimted alternatives (my daughter likes Big Thunder an aweful lot and my dad is more into wine than cognac) but both were pretty good. The Dream does most things pretty well, well enough that a 7 and a half year old and a seventy something year old both can find things they enjoy. 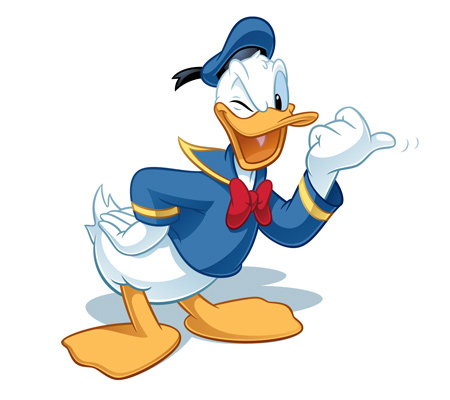 Seriously dude, put on some pants.

At the Meridian Ivana was sad on our last day, not only because alas we never did order the cognac but also because my father never had a chance to say goodbye. I think she honestly was a bit hurt that after 5 days of seeing him for several hours a night she never got to say goodbye to her temporary friend. I said goodbye to her, I also said goodbye to my new buddies and exchanged some e-mail addresses. I’m not sure if I will have life long friends from this but I did have vacation long friends and that was more than I expected.

After she loudly inquired about the lack of goods between Donald’s legs I explained to my daughter that while real ducks actually have huge, oddly shaped and generally hidden genitalia cartoon ducks get by just fine without them.  Around that time $1,200 for a shot never sounded so good.

We’ll wrap it up with a few final thoughts in part three.