There are good animals and there are bad animals.  Gorillas I think must be bad animals.  For one thing, they stink.  Ever wonder what that smell is at the exit to Kiliminjaro Safari?  Putrid, vomitable gorilla.
They are also only marginally cute even as babies, which is tough to do in the animal world.  And they have a reputation for flinging certain items that you don’t want to have flung at you.
But I think the biggest indicator is that they are attracted to villains.  Despicable people like Jane Goodall and Sigourney Weaver.  If you’re hanging with that crowd, it’s a sure bet you end up in juvy by your 10th birthday.
The gorillas at Animal Kingdom live in the aptly named “Pangani Forest.”  This area used to be called “Gorilla Falls,” but that title proved far too confusing for tourists, who were just trying to find out where to see gorillas.  As is the case with most tourist attractions, Disney thought it wise to make a more explicit title based on a coastal village in Tanzania.
You might be wondering what Villains have to do with any of this.  So let me spell it out for you.  When I say “Coastal Tanzanian Gorilla Village,” what Disney villain immediately springs to mind?
If you said Clayton, then you are close.  If you said Scar, then you are even closer.  If you said Bette Midler in Beaches, than you probably need to seek mental help.  But the most obvious answer is Jafar.
The movie Aladdin is clearly based in a Tanzanian coastal village and features several gorillas in prominent roles.  At least in the Rod Serling version.  The best part is when they discover the remains of the Cave of Wonders on the beach at the end.  Love that twist ending.
And really, how else can you explain the visage of Jafar in the middle of Pangani Forest Exploration Trail?  If you don’t remember seeing it, you need to look closer.  Awhile back, we chronicled the “Hidden Baloo” over in Harambe village (which made sense, since The Jungle Book is set in the middle of a bustling African city).  Now we bring you the “Hidden Jafar”.
Still don’t see it?  It’s really just his face.  His craggy, timeworn face. 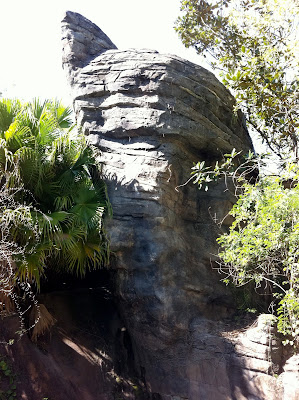 And for the record, we are still not done uncovering random hidden things in Animal Kingdom.  There’s actually another one near Jafar, and it’s not a hidden Iago.  But that’s for another time.