There are some things that are sacred to a man, and severed animal heads are some of them.  Just the heads, mind you.  Nobody wants the stuffed backside of a moose sitting in their office. But severed heads, you can stick those anywhere and it will still look classy.  This is something females don’t seem to understand.

If it can happen to Pecos Bill, it can happen to anyone.  I’m sure he got tricked into it.  He was probably pretending to be a good husband, gallantly heading off to the local Dry Goods with her to pick up some vittles rather than watching the Longhorns game.

But all it takes is the tall tale tell-tale sign of your iphone glowing through the pocket in your chaps with the latest score update, and suddenly Slue Foot Sue gets suspicious.  That’s when she turns to you and in an innocent voice says, “Honey, why don’t we remodel the kitchen?”

What can the man say to that?  He can either spark armageddon by pretending that he wasn’t checking the game, or he can agree.  And in one fell swoop, your taxidermy is getting kicked to the curb in favor of more counter space (the bar’s already a mile long; how much counter space does she need??)

It doesn’t seem like that long ago that Melvin, Max, and Buff — those wonderful characters from the Country Bear Jamboree — made a second appearance in Frontierland, this time inside the Mile Long Bar.  This was actually the Jamboree’s exit.  Sometime in the 90s, the Mile Long Bar was removed and the Pecos Bill restaurant expanded to provide more dining capacity.  The three heads disappeared. 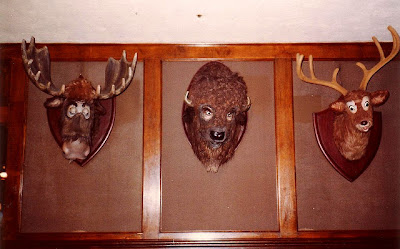 Just like in the attraction, the heads in the Mile Long Bar were animated.  They would come to life during the end of each Jamboree performance and continue the song, “We Hope That You’ll Be Coming Back Again,” as well as some spoken one-liners to audiences filing out into the Magic Kingdom sunshine.  It was a shame to lose them.

But upon reflection, they didn’t make much sense.  If these were the same characters from the show, how did they make their way into the bar?  We’ve been led to believe that they don’t have any bodies, but maybe this is some sort of demented Country Bear version of the stockades, where they capture innocent woodland creatures and pin them behind a wall, so that only their heads can stick out.

Or maybe the Bears have an alliance with XS-Tech, and they can use teleporting technology to move the heads across time and space in the blink of an eye.

The only theory that I can come up with is that the heads were actually not Melvin, Max, and Buff, but their “cousins,” who made appearances at the Mile Long Bar when the original performers were holding out due to a contract dispute.  They look alike, sound alike, and wear the same wooden mounting plates, but they are completely different characters, making them the “Coy and Vance” of Frontierland.

Special thanks to UFG8R on Flickr for the great picture of the three heads!