Flashback to 1999.  Beloved EPCOT Center attraction Journey Into Imagination has closed to make way for one of the most horrible abominations ever to grace a Disney theme park:  Journey Into YOUR Imagination.  Gone are Figment and Dreamfinder, replaced by everyone’s favorite Monty Python sell-out, Eric Idle.  The ride has been gutted, replaced by sparse sets, awful dialogue, and perhaps the most insulting storyline every foisted on the American theme park public.

In this ride, it is not only insinuated, it is stated as FACT that YOU have no imagination.  Dr. Nigel Channing is giving you a tour of his new Imagination Institute, and he scans your brains at the start of the ride.  Sure enough, YOU the guest are a brainless, uncreative moron.  He then proceeds to take you through the Institute, exposing you to a train sound gag from the defunct Mr. Toad, a mirror-box sight gag from a tacky tourist shop, and an upside down house gag from I-Drive.  And supposedly we’re the ones lacking imagination.
The ride did not last long.  Disney quickly realized that insulting its paying customers wasn’t quite the roaring success they thought it would be.  The ride was quickly retooled into some kind of Five Senses funhouse.  Once again showing themselves to be supreme masters of imagination, they added a Beavis and Butthead fart gag, then bailed on the Five Senses idea when someone pointed out that the Touch and Taste labs were not only difficult to execute, but also likely to result in some very serious litigation.
They also acquiesced to fan uproar and brought back Figment — making him so thoroughly annoying that fans should never ask for anything ever again, lest we suffer more destruction of our precious childhood memories.
I thought that Disney had learned its lesson when it comes to getting people to pay money to be insulted.  But apparently not.  I stumbled across this t-shirt now for sale at Disney’s Hollywood Studios.  For those of you that aren’t former Cast Members, just be aware that this is a very popular quote among CMs for making fun of someone, and that someone isn’t Goofy. 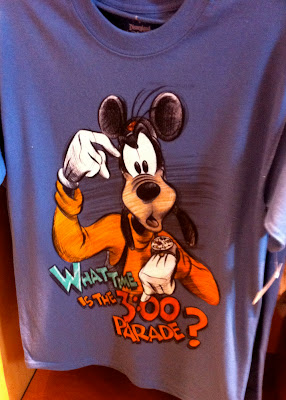