Star Tours 1.0 has been retired for nearly a year now. Star Tours 2 is not only better than the first, it also may be better than the three prequels, the Star Wars Christmas Special, and that silly CGI Max Rebo Band from Return of the Jedi Special Edition. But for all its posh new upgrades, one thing still sullies the Hollywood Studios version of the ride — the replacement of its original gift shop, Endor Vendors, with a newer version called Tatooine Traders. 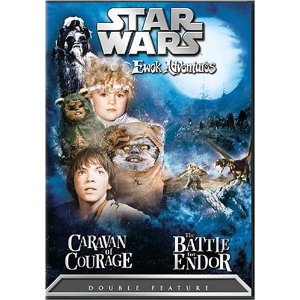 But not the Ewok Adventure.  Fear the Gorax!

It’s not the merchandise, mind you.  This is the best Star Wars gear you’re going to get outside of a custom fanboy action figure from Sillof (I would kill for his steampunk line).  It’s not the picture-overlay booth or the Build-Your-Own-Lightsaber stations either, though I’m not the target demographic (at least for the photo booth).  Believe it or not, it’s not even the “Backstage Movie Set” theme which inside, a holdover from the Endor Vendors days even though the ride itself eliminated this ridiculous pretense.

No, it’s the stupid name.

Tatooine Traders.  A bit unimaginative, don’t you think?  And a misnomer too.  They really won’t accept any trade other than cash.  But I guess there’s nothing inherently wrong with naming it after Tatooine.  OTHER THAN THAT THE REST OF THE AREA IS ENDOR! (caps mine)

Endor Vendors is a much more clever name. They not only found a word related to shopkeeping, but also made it rhyme with something in the Star Wars universe.  The outside looked exactly like the shield generator bunker from Return of the Jedi.  It was completely in theme with the Ewok Village and AT-AT set piece nearby. 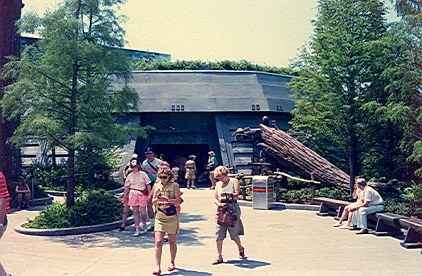 Your friends are walking into a trap.  An entire legion of my best fanny packs awaits them.

Just look at above, in this awesome image graciously loaned by Mouseketeer Alison from Walt Dated World (one of the first and absolute best sites about lost Disney World history).  Holy Endor Bunker goodness, Batman!  All that’s missing is R2 trying to short-circuit the door while Han and Leia stand guard.  And why yes!  That IS a crashed speeder bike mangled in the fallen tree!

Then the prequels came out.  Tatooine figures prominently in The Phantom Menace, and suddenly there was a rush to change planets at the gift shop. Endor Vendors became Tatooine Traders. Because, you know, Star Wars fever might be dying down, what with the big release of the MOST ANTICIPATED MOVIE OF ALL TIME! (caps mine)

Look, the Tatooine re-theme wouldn’t even really bother me all that much (other than clashing with the Ewok village), but every time I walk past, I get a distinct feeling that the designers have never A) seen Star Wars, and B) designed anything. 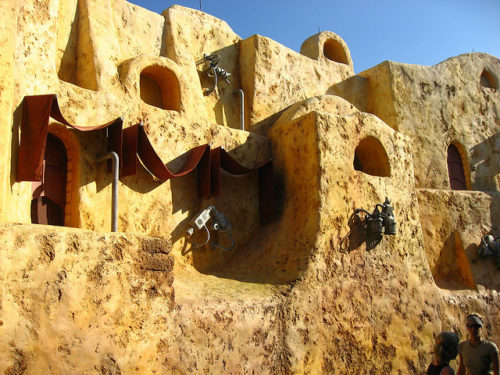 Apparently to the outsider, Star Wars set design means taking random pieces of machinery and gluing them at weird angles to the outside of a stucco hut.  It irks me every time I look at it.  Even if you thought that you just needed weird pipes and vents, why do you have to stick them on the wall in such a dysfunctional manner?  George Lucas may have been famous for scuffing up his sets to make them looked lived in, but he never told anyone to just fling random scrap metal at a wall.

Anyway, enough of my ranting. So the much cooler Endor Vendors exterior is gone. It’s not like they got rid of anything cool inside the gift shop itself, like maybe Darth Vader or a holographic Energizer bunny.  Oh wait…