Back in the 80s, a popular male fantasy was the idea of dating identical twins. And also to chew gum with them. I am sure the cultured, societal men of today don’t indulge in such outdated notions, but it used to be a big deal. Two girls who are exactly alike in almost every way. If you wore a pair of polarized glasses, it would be like you are dating in 3-D.

Apparently if you are around identical twins a lot, you actually can start to tell the difference. Like for instance one lives in Boston, and the other lives in California. Or one sings and the other plays guitar. Or one has short hair and the other has long hair. 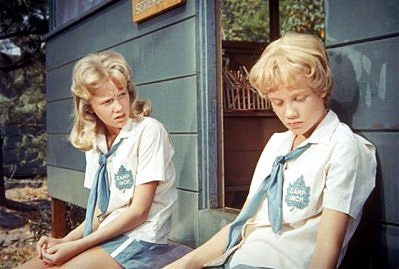 There’s something very familiar about this…

I’ve been to the Magic Kingdom hundreds of times since moving to Central Florida. But in that same timeframe, I’ve only been to Disneyland 3 times. Lots of people like to debate which is better. Lots of people choose Disneyland. I never really got too excited about that debate, mainly because too many of the arguments come down to things that don’t matter to me.

Rather than talk about which is better, I’d rather talk about what is different. For me, a trip to Disneyland is like dating the other twin. It feels eerily similar to what I’m used to, but something is off. Not in a bad way, just in a strange “her-left-earlobe-is-longer-than-normal” sort of way.

It’s hard to describe this sensation if you aren’t intimately familiar with one park or another. Minute by minute, your mind is constantly struggling to re-adapt to a place that it thought it had memorized. I don’t mean like trying to find the bathrooms. I mean things like the number of steps it takes to walk under the train station tunnels.

I recently got back from my date with Disneyland (One of two big reasons for my parkeology hiatus — the other being a national holiday that requires me to scramble around to various stores spending money. Curse you, Ninja Day!). I thought I’d spend some time diving into the things about Disneyland that rock my Magic-Kingdom-infused world. Some are good, some are bad, but what they mainly are is different.

Today, I focus on Main Street, U.S.A. And those train tunnels are short. It’s like four strides, and you’re through. Disneyland gets room for maybe three posters on the wall. Magic Kingdom’s tunnels are like sitting through 40 minutes of previews before The Hobbit even starts. This is on top of the immense parking lot, and the giant lake you’ve already traversed. By the time you set foot in the entry tunnels, you’re ready for the themed adventures to start already. Disneyland throws you right into the fantasy.

Once you’re on the street itself, everything looks exactly like it’s supposed to. Except when it doesn’t. The buildings have some subtle differences. Disneyland does feel a little more toy-like, more intimate. This is another reason people give for Disneyland being better, but to me, it’s not much of a plus. Say what you want about Disneyland’s intimate feel. It is negated by the crushing problem with handling crowds.

This year, Disneyland had the idea to hold the Candlelight Processional on Main Street every night for a month. This means there is a giant roped off stage right at the entrance to the park, and if you dare set foot on Main Street anytime between 4 pm and the end of the Fireworks, prepare to get up close and personal with ten thousand of your favorite strangers. Did I mention there is a giant theater back in Fantasyland that is completely unused? But no, because it’s Disneyland, and tradition, and all that, the Processional proceeds.

It’s not just the Candlelight that causes crowd problems. Adventureland is at times virtually impassible, as are several areas in Fantasyland. Not that Magic Kingdom doesn’t have its choke points also, but it holds people a lot better than its sister. Forget the intimate toy-like buildings. Give me an extra yard of sidewalk width.

Remember a few years back when the big Magic Kingdom hulabaloo was that they smoothed out the physical curbsides of Main Street, especially around Town Square and Hub? Well Disneyland laughs in the face of smooth passageways. And now that I’m visiting parks for the first time with an actual stroller, I have never in my life spent so much time wishing a curb wasn’t there. All you parents and wheelchair people, I’m finally understanding. Some things are just a bigger headache than they’re worth.

Another major difference is in the walk-around characters. It is always amazing to me that Disneyland characters will simply be mingling freely, not surrounded by a mob. In fact, in Toontown, the character assistant was even announcing this fact, to tell people it wasn’t necessary to form a line. “Goofy is walking around! Repeat, he is in motion.” I expected Secret Service agents to seal all exits.

We had several character encounters in Town Square, where there were chipmunks and rabbits and all sorts of cartoon rodents randomly strolling the sidewalks. Even Mickey Mouse himself turned up (albeit in Big Thunder Ranch) and spent copious amounts of time with my three-year-old unbothered. It was bizarre to say the least, since he would have commanded an hour-long wait for two minutes of pictures in a carefully organized greeting area at WDW. Do people not know who he is? Were they looking for Duffy the Bear? I think Disneyland still has that old-school, charming feel to the characters, before WDW commercialized them into PhotoPass opportunities. They add to the scenery, rather than becoming the focal point.

Now, can I give you a tip about the Fireworks? Disney parks on the whole have fallen into this idea of staging fireworks so that they simply HAVE to be viewed from Main Street, in front of the Castle. As we discovered in our second attempt to view the fireworks (the first having been decimated by my refusal to wait in shoulder-to-shoulder crowds for a couple hours before hand), there is a much better alternative. Watch them from Small World. There were literally fifty people in that location. And they do projections on the Small World building. You don’t get to see any characters flying off the mountain, but it’s worth it for some fresh breaths of oxygen. And Disneyland’s castle makes for a less impressive backdrop anyway.

When it comes to the shops and buildings, they are different enough, but not distractingly so. The buildings are roughly the same. From an attraction standpoint, Disneyland still has its Penny Arcade and its Cinema, but those are window dressing for the most part. And I should turn in my Parkeology Card for forgetting to check out the Magic Store. Is it still there? One thing you won’t find are any of those Sorcerers of the Magic Kingdom hotspots.  Which explains why I didn’t often come upon a line of people staring at a random store window.

We may as well discuss the train right now. Disneyland has a side-facing cattle train, an experience you can only get at Animal Kingdom when in Florida. The vignettes along the route are pretty much the same, until Disneyland hits you with the one-two punch of the Grand Canyon/Primeval World diorama. It seems to come out of nowhere too, if you’re used to the Florida version (the trip between Fantasyland/Main Street is easily the most boring portion of the MK’s route).

Disneyland Town Square has Great Moments with Mr. Lincoln, which would be the Mickey greeting area in Florida, but the show really should be compared to Hall of Presidents. In an interesting twist of fate, this “World’s Fair Original” borrows heavily from American Adventure, which came decades later. We get the “Two Brothers” song as well as “Golden Dream.” In spite of these elements, it comes across as smaller, less ambitious than either Hall of Presidents or American Adventure. Those are both mega-animatronic shows and are quite awesome in scope. Mr. Lincoln is not. It’s not hard to see his roots, as a technology demonstration, rather than a full-fledged experience.

My big regret is that I was unable to enjoy Main Street at night. One of my favorite parts of the old Disneyland TV show was when they would show the lights twinkling on, with people milling about. And being simply unwilling to waste time staking out concrete, I missed out on the parades as well.

In spite of everything listed above above, Main Street is still the land with the most similarities to Magic Kingdom, and it’s the one where the slight differences threw me off the most. I do have a favorite Disneyland tradition, a goodbye nod to the candle burning in Walt’s apartment. That’s something I can’t get here in Florida. Maybe in the end, it does matter that this is the park where Walt walked.