The strangest thing about Disneyland’s Adventureland is that the Treehouse is in the middle of the motherlovin’ sidewalk.

It’s no secret that I have an unhealthy fascination with Magic Kingdom’s Swiss Family Treehouse. I love the way it’s perched out there on its own plant-infested island, sweltering in the hot florida sun. I love that you can see all three mountains from various vantage points. I love that one lookout point is called something like “Jungle Overlook,” and stares straight into uncharted wilderness.

By contrast, Disneyland’s version, Tarzan’s Dead Parents’ Treehouse practically has a freeway under it, and I’m not joking about the entrance being in the middle of the walkway. Literally, there’s a set of stairs coming up like a weed in a crack of the pavement, leading to a suspension bridge that crosses over to where the actual Treehouse is shoved into a spare nook, almost up against the Indy showbuilding. It’s the most jarring thing about Adventureland, when one is used to Florida. 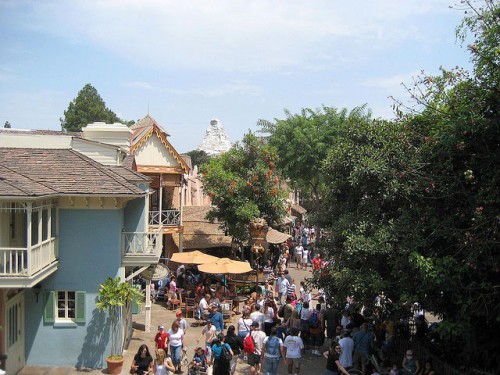 This is the view from the top of the stairs leading to the treehouse. Note that below me, throngs of people are passing by either on the left or the right.

I get it though. They work with the space that they have. I’m not crazy about Tarzan evicting the Robinsons, but the essential treehouse experience is the same. A few static Tarzan illusions instead of stilted references to “our beloved family” and so forth. I think both parks are to be commended for sticking with the walk-thru Treehouse concept in general. It’s such a uniquely “Disney” idea, and is one of those small attractions that doesn’t amount to much on the surface, but paints in the background. You’d notice if it was missing. I’m glad it’s been spared from the Retail Location Makeover (which unfortunately is also uniquely “Disney”).

Another thing worth noting is just how tight Disneyland’s Adventureland is. At Magic Kingdom, Adventureland can resemble a cholesterol-encrusted pulmonary artery, slowly choking to death with every running of the parade as untold thousands try to chart alternate paths through the park. Disneyland’s Adventureland is that same artery thirty bacon cheeseburgers later. You have to grease your limbs just to make it past the triple-headed monster of Jungle Cruise, Indiana Jones Adventure, and the Indy FastPass area.

The area itself didn’t register as all that different from Florida’s version. Obviously there’s no Magic Carpets (yay!) but there is an Aladdin Oasis crammed behind the Tiki Room (and completely deserted, by the way. We frolicked with Aladdin and Genie for several minutes before deciding that it was really creepy for grown people to be frolicking). Also, there’s no Caribbean Plaza, since Pirates is off in New Orleans Square.

What they do have is the Indiana Jones Adventure, which is consistently near the top of my  all-time favorite park attractions. It is my favorite queue, bar none, and the ride itself is a blast. It is the most anticipated part of every trip for me — even this one, which also had  Carsland and World of Color beckoning. If I had any complaint, it’s that some of the hokier elements stick out all the more, the more I see them. The absurd size of the animatronic cobra, and the painted demon scrims in the skull room. But overall, the experience is still amazing for anyone who grew up on George Lucas films. I wish Magic Kingdom had something to compare to it. 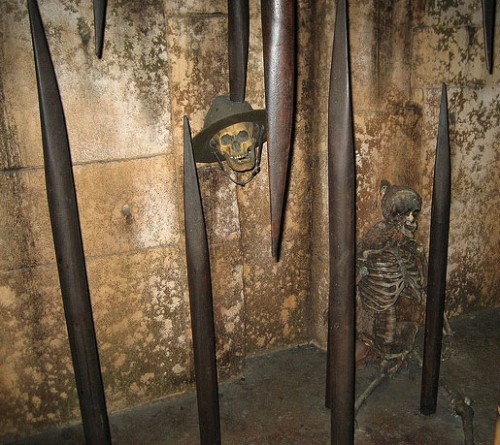 All family vacation spots could do with more skewered heads.

Some things never, or rarely change though. Both parks have Jungle Cruises and Tiki Rooms. The Tiki shows, for all intents and purposes, are identical. Different pre-shows (various tiki gods in California, a single god in Florida, but with birds). A fun aspect for me is that the Dole Whip stand literally has a secondary line from within the Tiki Room preshow area. The Tikis also have their own restrooms here. It’s like a whole Tiki ecosystem in there! 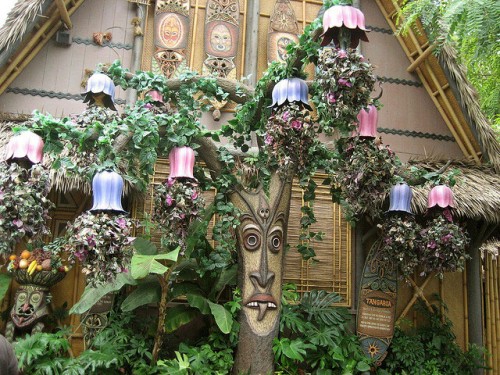 And if somebody would be kind enough to build this tree in my backyard, I would pay. Dearly.

Once inside, everything goes off as planned. I think Florida’s mountain backdrops and rainstorms are slightly more elaborate, but Disneyland still has the dancing fountain in the center.

As Mr. Miyagi would say, Jungle Cruise is same, but different. I was disappointed not to traverse the upstairs queue, since Magic Kingdom doesn’t have that (I’ve heard rumors that it once did, but these are unconfirmed and certainly it hasn’t been used in the last few decades). Once onboard the boats, many experiences and jokes are the same. Disneyland has a cool piranha effect. Magic Kingdom has a wicked awesome flooded temple. The Disneyland cruise does feel tighter, with show scenes crammed more closely together. Florida’s lush jungle gives it a more remote feel. 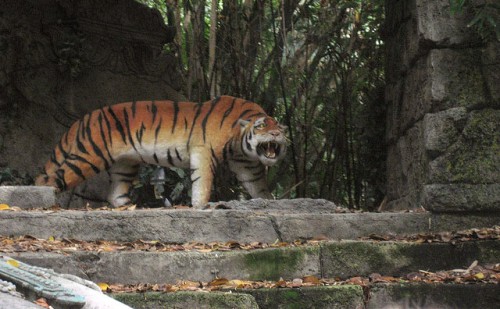 He’s not so tough when he’s not staring out at you in pitch blackness with green LED eyes.

Finally, a word if I may about one of the shops, the first one you encounter when entering the land from the Hub… There’s nothing all that remarkable about the shop itself, but from my very first visit, I have made this shop a must-see event. This is what people mean when they say Disneyland must be very clever with its space. The shop is so cramped and twists around on itself so many different ways, that it is possible to enter from Adventureland and come out on Frontierland, without ever feeling a jarring theme change. It’s labyrinthine in the best sense of the word. It’s really one giant shop, with several ports of entry, and it’s a neat trick to see it segue so smoothly from one area to the next.