If Hans Gruber wanted to attack Adventureland, he’d stand a pretty good chance at turning that Tiki Room pagoda into the next Nakatomi Tower, but everything is else is too much work. The Magic Carpets are guarded by spitting camels, the Jungle Cruise is too spread out, and the Pirates of the Caribbean has all those cannons lining the walls.

But none of these places holds a candle to the Swiss Family Treehouse. 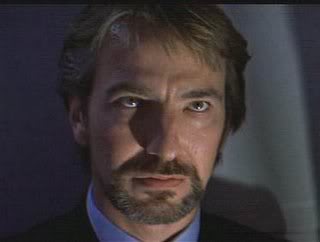 That place is locked down tighter than the Kremlin:  cannons sticking out everywhere on the walkway, stacks of mortars piled up like the pyramids of Giza.  There’s even a gun pointed straight down the throat of the eggroll cart, for crying out loud.  Say what you want about Robinson family values, those dudes were poster children for the NRA.

Apparently the Robinsons once had a real problem with Swan boats.  In the 1970s, these giant creatures went out of their way just to run laps around the Treehouse.  Because they could.  Who was going to stop them?  A family of cuckoo clock makers?

The Robinsons set up a cannon nest right on the edge of their property, facing the river, where any swan coming down the pipe could eat a face full of lead if it so much as squawked at them sideways.  In the event that the swan brought his buddies, there was a warning bell on hand for the Robinson guard to sound the alarm.  In about thirty seconds, he could have an entire gang of Swiss mercenaries on the riverbank, armed to the teeth and thirsty for swan blood. 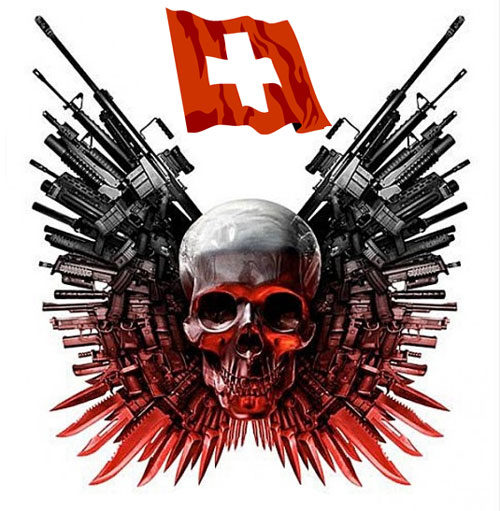 So much for that vaunted Swiss neutrality.

Of course, thanks to budget cuts, the swans are no longer a threat.  The treehouse cannon nest is abandoned, but it’s still there.  It gets overlooked, because the point at which you can first see it is also the same point at which you first begin climbing the Treehouse, and most people are too focused on that.  But as you mount the stairs, look down and to your right, and you’ll see the steps leading to it. 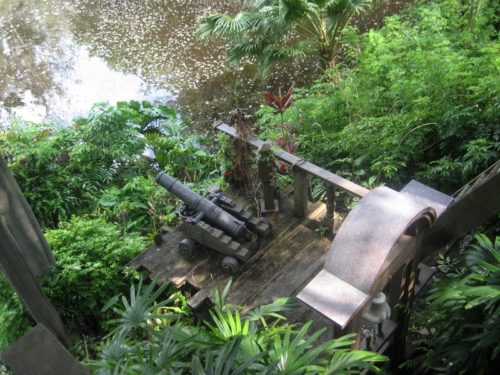 Some people throw pennies down there, which are collected and placed into a Swiss bank account. Har har.

The funny thing is, I am reasonably certain that this was once a guest accessible area.  There’s still a gate off the main treehouse path, but it’s now for Cast Members only.  It’s easy to see why they don’t want you down there.  The steps leading down are really more ladder-like, and there are drop-offs along the edges of the platform.  Nevermind the gunpowder, it’s a lawsuit waiting to happen.

See that odd post to the right of the cannon, which is not part of the railing?  I think that post was actually once on the other side of the cannon, directly over that tiny stump.  It’s attached to a rope, and I think this was meant to function as a railing over the cannon.  You can see another rope trailing down out of sight, and I believe this end would be attached near the bell.  There are pictures of a similar cannon in Disneyland’s old incarnation of the Swiss Family Treehouse, with a rope netting that acted as a rail. 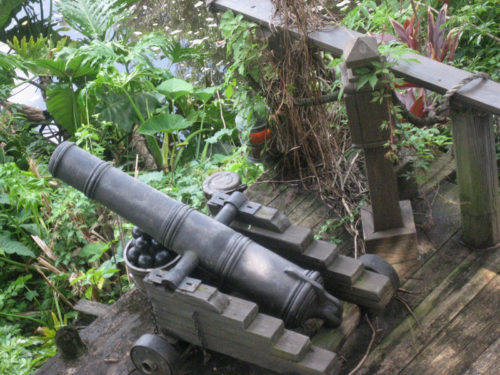 Unfortunately, I cannot turn up photographic proof of guests climbing down here.  I’ve looked all over the internet, but everyone seems more interested in snapping pictures of that water wheel than in keeping a lookout for deadly swans.  But if any of you older parkeologists have memories of ringing a bell while pretending to fire at a Swan Boat full of tourists, feel free to chime in with a comment.