If you’re like me, you woke up today wondering if there was any real connection between a singing legend, an octopus, and the greatest Disney coaster of all time.  Don’t feel ashamed.  Everyone ponders this at some point or another, although usually it is accompanied by a high fever and unusual doses of medication.
To answer your question, we have to go back.  Way back.  I will not give you the exact date, but it was sometime after Kramer discovered fire and before Steve Jobs invented the iPhone in his garage.  Give or take a day.
First, a little blatant self-promotion is in order.  I have to admit that today’s post is inspired because I recently wrote about Big Thunder Mountain on another blog that I’ve launched with my brother, who is also my writing partner.
lindsaybrothers.com is a place for us to promote our stories and talk about stories in general, which is my other big interest, beside Disney parks).  We currently have a series going on the 100 Most Extraordinary Adventures in any medium, and Big Thunder checked in at #84.  We’d love it if you’d give us a look, and maybe stick around if you enjoy it.  Anyway, back to the singing octopus thing. 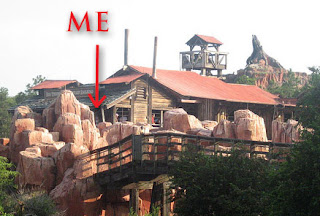 This is me, on my first day as a Walt Disney World Cast Member.  I was a proud new attraction host at the world famous Big Thunder Mountain Railroad.  I was fresh out of college, ready to make my mark on the Disney company, and I think I lasted about 2 weeks before I got a job in Ohio that paid more than $6 an hour and actually required the use of my new degree.
I washed out.  I couldn’t cut it.  My ego was writing checks my body couldn’t cash – which was too bad, because I really could have used the cash back then.  But the experience did leave me with one of my most treasured possessions:
I will pause for a moment as you wipe the drool off of your keyboard.  Got it all cleaned up?  Good, here we go.
There are many secrets in this handbook, and I dare not reveal all of them, because to do so would activate the microscopic explosive implanted in my cornea.  But one of them, I think, is safe because it turns out Wikipedia already has this info, though they spell it wrong.
On one page of the handbook is listed all of the official show scenes within the ride.  There are 20 of them, and I was actually required to take a test on them at the completion of my training.  You will not be surprised by most of them, other than that a few of them are a little trivial.
Here it is, in all its glory, but with one scene missing:
The first thing that should leap to your mind is:  “Show Doors is a show scene?”  (another tongue twister to go with “Snow Shed Show Scene”).  Yes, you can see them as you exit the cave-in.  Your train dips down beneath the buried track and out into broad daylight.  Doors are mounted on either side of the exit to this tunnel.
Today they are always open, but as it was explained to me, they were originally intended to open and close automatically, blocking light from entering the cave-in scene and increasing the effectiveness of the illusion.  I have no idea if they ever worked under real operating conditions, or if it was simply something that they had to abandon before the ride even opened.

Now to the mysterious Scene #8…

If you’re having trouble picturing any sort of scene in between the exit of Tumbleweed (“Flash Flood”) and going up the second lift hill (“Winch House”), do not feel bad.  You actually pass through a very, extremely, impossibly brief tunnel, and that tunnel is a mine.  And that mine has a name.

If you’ve seen the Pirates of the Caribbean movies, you might think that the character of Davy Jones is named for some sort of great sea legend, but he’s actually named after the tiny, worthless mine on Big Thunder, because my manual is dated several years before those movies came out.

In fact, it is 1960s singing legend Davy Jones for whom the mine is named.  At least I think so, because Show Scene #8 is called “Dave V. Jones Mine.”  And who said Monkees don’t belong in Frontierland?

Okay, I have no idea why it’s called that.  The other mines are “Abandoned Mine” and “Robber’s Cave.”  But for some reason Disney felt it was important to name this little 4-foot tunnel after some fictional person.
I know you are now excited to ride, to see if you can catch some glimpse of why it is called that.  I actually have a theory myself, but I’m more curious to see if anybody can come up with an explanation, especially when you’re whizzing through it at 30mph.  Good luck!