There’s an old Seinfeld episode, the meta one, where Jerry and George are discussing the concept for their TV show, which they’re about to pitch to NBC. The famous “show about nothing.” During the scene, they cast about for things which their characters could do on the show. George suggests that they could do normal stuff. They could read. Jerry is incredulous. “They read on screen?”

Spaceship Earth pioneered the idea of reading on screen 8 years before Seinfeld ever hit the airwaves. Think about how much reading goes on in the ride. You’ve got Pharaoh reading his decrees, Roman centurions passing along more decrees, Guttenberg inspecting his Bible, Jewish and Arab scholars debating ancient texts, some Renaissance dude studying Shakespeare or something. I guess when you set out to tell the history of public communication, it involves a lot of pensive thought and silent contemplation of paper. There’s very little emphasis on Toastmasters and imagining your audience naked (except for the Caveman stuff).

Yet for all the grandstanding about the evolution of the printed word (thanks, Phoenicans!) there seems to be a striking number of phonies masquerading as major players in the history of communications. Illiteracy runs rampant in Spaceship Earth, and the sad part is, these poor souls don’t even seem to realize how uneducated they really are.

I’m not even talking about this guy. 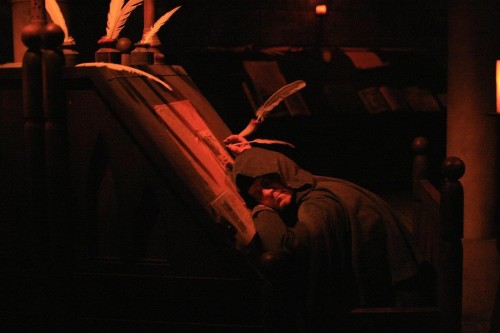 It’s not like he’s writing a Doctoral dissertation. He’s essentially copying someone else’s homework, and since he probably can’t understand a word it says, no wonder he’s bored. I don’t know Latin either, but I’m pretty sure I could trace it.

But a far bigger offender is this newspaper printer. 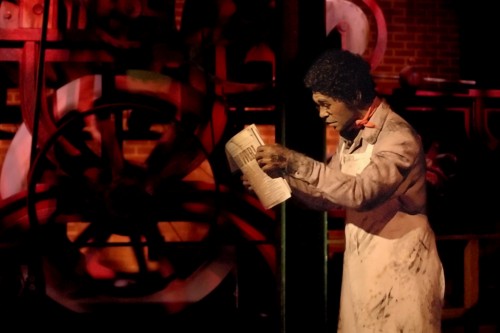 He looks all smart with those spectacles. The 19th century equivalent of Guttenberg. But he’s totally faking it. How do I know? The folded newspaper. Based on the orientation of the headline, he’s reading the part that’s known in the business as “below the fold”. Only if you fold up a newspaper and hold it like that, whatever you’re reading is upside down. Sure, we as the audience can clearly understand that the “CIVIL WAR IS OVER.” But it’s all Chinese to this dude.

What’s funny is, I think the ride, with its perfect attention to detail, actually did print that full newspaper, and if you look back over the guy’s shoulder, you can see that it’s upside down. The print is hard to read unless you have big-boy glasses like Mr. Hotshot Printer there, and I had to rely on my wife’s eagle eyes to spot it, but she says it’s there, and it’s upside down, and it says something like “Newspapers will be obsolete in a hundred-and-fifty-years” (I may have made up that last part).

Okay, so maybe he’s not supposed to be the world’s brightest newsman. I mean, he’s a laborer in a Civil-War-era print shop, not Woodward and Bernstein (I still think the glasses are putting on airs). Maybe we can forgive him. Then again, he’s not the only person inside Spaceship Earth who goes around doing this. 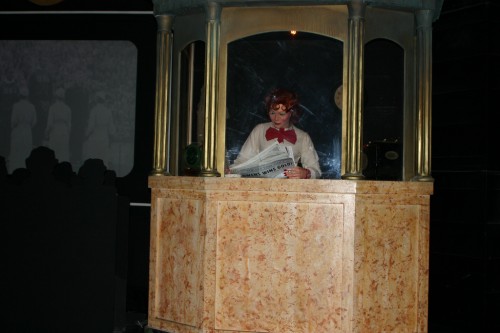 Gah! Another upside down reader! That newspaper is once again folded completely incorrectly for checking out articles on the bottom half of page 1. It’s easy to see why she doesn’t care about OWENS WINNING GOLD. It’s running on infinite loop inside the theater where she works. But all those other juicy Nazi Olympic stories are going in one eye and out the other. Something tells me she’s just biding time until her shift ends.

Fortunately, we’re only steps away from the television era, when the mere art of reading will finally be rendered useless. A good thing too. My eyes are killing me.