I have no wish to rant about Storybook Circus, but there’s Another Part of Me that wants to. Circuses may have been magical in the first half of the 20th century, but today they conjure up negative associations with animal cruelty, carnival freaks, and child endangerment. Which come to think of it are pretty much the three defining characteristics of both Dumbo and Captain EO.

Certainly the fan community is impressed. All it takes is one Carolwood Pacific reference and Disney will have us all eating out of their hands. And that carpet in the gift shop! Such beauty we have never seen before! Judging by my blog reading list, there have been reams of paper spent on the Big Top Souvenirs carpet (because who doesn’t print out their blog reading list?) But I’m a jaded old cat, so I say talk to me again in six months and let’s see how that carpet is holding up.

I tend to lump Disney geeks into three categories. At the top you have the really passionate fans who know everything about everything. They write blogs and stuff. They’re well aware that there used to be a Mickey Mouse Club Circus at Disneyland (it sank into the swamp), a Circus Fantasy parade/show (it also sank into the swamp), and an EPCOT Daredevil Circus (it burned down, fell over, and then sank into the swamp). But Storybook Circus stayed. These people would have spotted the Carolwood reference a mile away, without any self-congratulatory help from the official Disney Parks Blog. These people know that the original idea for Storybook Circus came from a 1972 model for Dumbo’s Circusland, and if you check out the pictures, you can see just how similar the idea is. It’s easy to see why the 1972 version was never built: It lacked a 60-second, barn-themed kiddie ride. 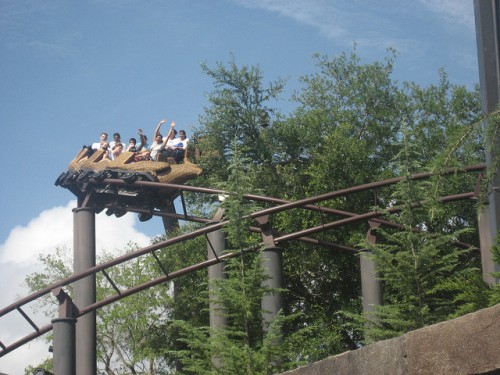 Practically de rigueur after this stunning masterpiece of theming!

In the middle are the normal fans. These folks may not know everything, but then again, they also have lives. They can name most of the major Imagineers (especially those with outrageous names like Xavier, Yale, Rolly, and Jim). They have some appreciation of history. They can quote Haunted Mansion word for word. They’re either transitioning into obsession, or are self-aware enough to recognize that a career in circus rants isn’t as exciting as it sounds.

At the beginner level are the Hidden Mickey guys. These are the people who just love everything Disney, including its lesser films like Anastasia. They know about all the secret things in Florida — the hidden tunnels and the collapsible castle and so forth. They also know that discovering three random, vaguely conjoined circles is either a super-secret hobo language invented by Leonardo DaVinci himself, or a possible indication that you live in an Olympics host city. 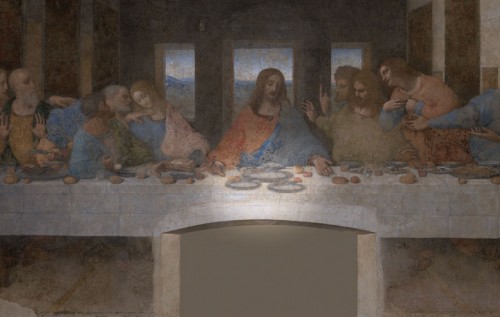 I don’t despise the Hidden Mickey fans. We were all there once, right? But the main point of the Internet is to find some other group to feel superior to, and the hidden mickey crowd just happens to be the Rebecca Black to our Justin Bieber. Also I find it terribly amusing when they stumble off the bunny slope onto the Black Diamond trails.

True story. This happened at Storybook Circus a few weeks back. There I am, minding my own business, when suddenly I recognize two of the most famous faces in all of the Disney podcastosphere (not exactly the population of China, but still!). George and Jeff from Communicore Weekly are in line behind me at Dumbo. I’m friends with these guys online, but had never met them in person. It helped that they were both wearing these: 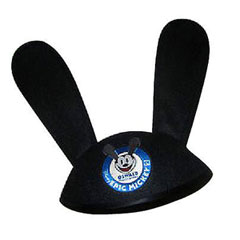 So we’re spending a few minutes catching up, introducing the families, etc. And some more people rush up, who shockingly recognize none of us. They just want to know where Jeff and George got those awesome ear hats. The guys politely explain that they got them at the Emporium on Main Street. The lady is thrilled. She is a huge Disney fan and recognizes how unique these items are. She wants to know what that picture is on the little badge. “Oswald the Lucky Rabbit,” Jeff replies. He points to her companion’s Oswald t-shirt. “Just like you have there.” This woman is talking to two mega-fans who hosted their own live sold-out fan-event at Epcot, and one Parkeologist who makes up fake interviews with the sheep in Impressions de France. If there’s another level of Disney nerd above us, it’s reserved for people whose last name ends in “Lutz.” “Oh no,” she says. “That’s not Oswald. That’s Mortimer, before Walt changed him to Mickey.”

Anyway, I have gotten so far off topic by now with my celebrity name-dropping, that I’m not even sure what my point was. Oh yes, Disney geeks and Storybook Circus.

My theory is that Imagineering often aims for the mid-level of geekiness because most Imagineers are themselves in this level. They work for the company, so they have a decent amount of knowledge. And they were probably fans growing up, because it’s a weird career choice otherwise. But it’s also their job. We all like to say we’re passionate about our jobs, but I’m guessing most of us aren’t obsessing about the rich history of Accounting or collecting Teacher trading cards. Imagineering has its share of obsessive geeks of course, and probably its share of hidden mickey lovers too, such as whoever dreamed up Paradise Pier (that’s actually insulting even to hidden mickey lovers). But most Imagineers probably don’t come home from work, trim their mustache, change into vintage Smoke Tree Ranch pajamas, and dine on chili and beans (I’m not the only one that does this, right?)

I don’t really fault them for this. In the end, it’s not how much Disney history you know. It’s whether you can built a great Disney attraction. Yet it still bothers me when they miss an obvious reference to Disney lore and culture. Take this, for instance. 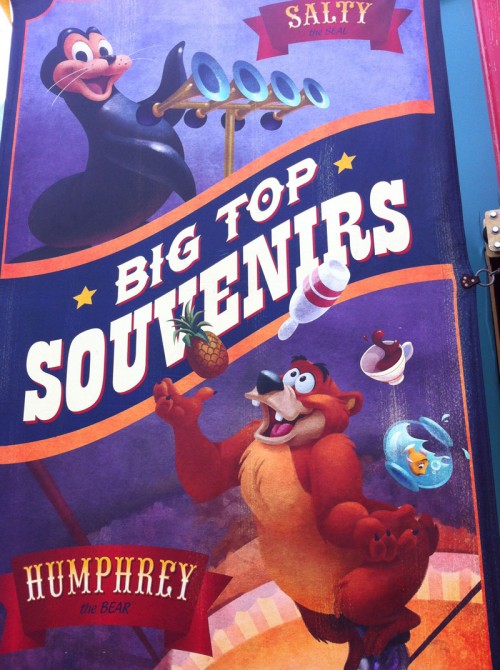 One of the posters outside the gift shop.

Now the funny thing is, in many circles, this is actually considered a successful example of Imagineering geekiness. Humphrey is practically unknown to the vast majority of the people visiting Storybook Circus. I’d wager that 99% of the people there think this is just a random bit of artwork made up specifically for the circus poster, and that Humphrey has no history outside of this one-time use. Of course, Disney geeks know Humphrey starred in a few National Park inspired shorts several decades ago, and he has actually been making a bit of a theme park comeback (Humphrey merchandise was on sale in Frontierland not too long ago). 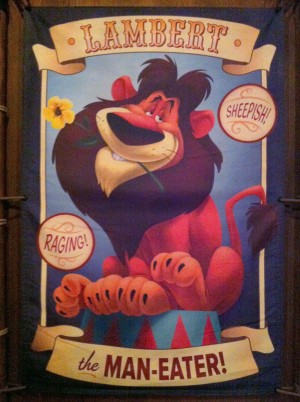 Humphrey isn’t the only obscure character referenced in Storybook Circus posters. Lambert the Sheepish Lion, from a 1952 short film, gets his own poster, as does Salty the Seal, who originally starred in Mickey’s Circus all the way back in the 30’s. There’s even some character referred to as “Goofy” whose origins remain unknown.

But Humphrey bothers me. Not because I dislike Humphrey (I love Humphrey! Humphrey’s the best!), but because they have a whole 30 minute featurette sitting in their library, whose entire plot revolves around a circus bear. Bongo the Circus Bear is not just a major theatrical effort for the company. It’s also SEO friendly. 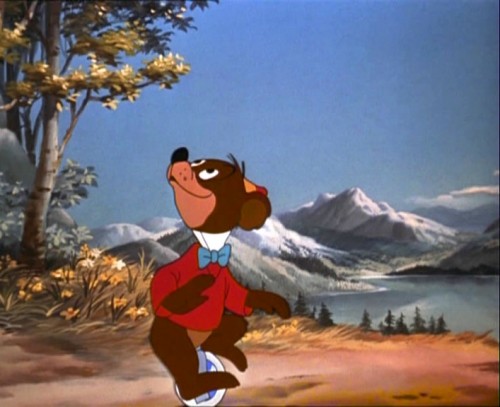 His whole shtick is that he’s good on a Unicycle! It’s like Humphrey is pulling some Single White Female switch on him!

You’ve heard of Mickey and the Beanstalk, of course. The Sir Mickey’s shop in Fantasyland already references this film. What you may not know is that it was only one half of a feature length movie from 1947 entitled Fun and Fancy Free. It was released during Disney’s anthology period, when money was scarce because of some war or something. It had two segments, stitched together with some Jiminy Cricket transitions. The Beanstalk made it into the parks. Jiminy made it into the parks. But Bongo has disappeared completely.

It’s strange to me that Imagineering built an entire Circusland in the parks, and had an obvious need for some kind of circus animal to not only add some background, but to also be the main face of their candy apple counter inside Big Top Souvenirs (Humphrey appears on the signage there too). They wanted a bear, and instead of tapping the only circus bear in all of Disney theatrical history, they opted for the comic foil of a stuffy park ranger. 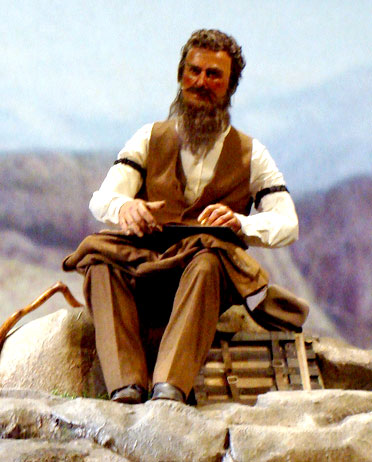 The Chuck Norris of Park Rangers.

Bongo, I feel like Imagineering owes you an apology. Either nobody over there has ever bothered to watch all 51 canonical Disney animated features (I’m not the only one that has done this, right?), or they’re all a bunch of Humphrey groupies.

I suppose I will just have to forgive this oversight, and accept that Bongo is never going to be the kind of breakout star we all hoped for, even though they did see fit to give him a Vinylmation. It’s like Bill and Ted, or Bosom Buddies. One guy goes on to get all the glory, the other guy is stuck waiting for the reunion show. And anyway, at least Humphrey is still a genuine obscure Disney reference, so it’s not a total failure.

Unlike that Sorcerers of the Magic Kingdom game. Disney, have you fixed this blatant Dalmation error yet???