Yesterday I posted about how strange it is for frequent guests to suddenly have new experiences to enjoy. The Seven Dwarfs mountain has been isolated in the middle of New Fantasyland for what feels like a decade. We all remember when it was just a wee bump of steel in the middle of a dirt pit. And now suddenly here it is with a date to the prom and a tennis scholarship to State U.

Like the rest of New Fantasyland (except Storybook Circus), it is exceedingly pretty. And while I found the coaster to be rather disjointed, the ride is not without its moments.

The dark ride section is pretty great. It has one of those quintessential Disney moments, when Doc starts to call Heigh-Ho and the train creeps ever-so-off-kilter up the lift hill, with the music swelling, and Dwarf shadows marching beside you. That’s the kind of thing that Disney does best. It can give you goosebumps when done properly, and this moment is a bonafide goosebump moment. What Disney Magic used to mean, before the term became so watered down.

The ride is not meant to be a major E-ticket attraction, and in fact it is a little jarring to go from nicely themed kiddie-coaster to amazing dark ride to nicely themed kiddie coaster again. The lines should settle down after the initial newness wears off. In spite of some initial trepidation about the project (back when it was mostly Dumbo and princess greets), I’m a fan of New Fantasyland. I think both Seven Dwarfs and Little Mermaid are worthy additions to the Magic Kingdom. The restaurant is a much needed improvement, and though I don’t care for Story Hour with Princesses, the cottage is at least pretty and well rendered. Storybook Circus is not cream of the crop, but at least it’s an upgrade over Toontown. On the whole, this new area significantly improves the ambience of the Magic Kingdom — especially compared to the medieval tournament tents of original Fantasyland. I’m anxious to see where the Magic Kingdom goes from here.

I had the benefit of exploring these Bold New Worlds almost back to back. As strange as it sounds, I probably enjoyed the initial Harambe Theater District experience more. Harambe offered not just a surprising new set of buildings and landscaping to explore, but it gave me a different view of the old stuff — the view back towards Africa, the return of the geyser rocks, that white access bridge beyond which lies Pandora. But this new, fresh glimpse of Disney World from a different angle will soon fade, and I suspect the Seven Dwarfs Mine Train will have the staying power.

As a parkeologist, I was delighted to discover something in the Mine Train queue which I’m sure went unnoticed by practically everyone else standing in the Florida heat with me. Back in the 90s, I bought a collectible CD of the Snow White and the Seven Dwarfs Soundtrack. It contained two songs on it–scratch tracks of deleted songs from the movie. While listening to the instrumental background music in the queue, I was startled to hear renditions of both “Music in Your Soup” and “You’re Never Too Old To Be Young” mixed in with “I’m Wishing” and “Someday My Prince Will Come.” It shows a welcome attention to the history of the landmark film that inspired the ride. 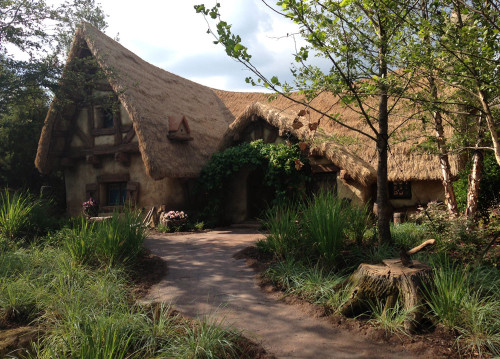