I think it’s cool that we’ve gotten to be so comfortable with each other over the years. Like how you don’t mind if I occasionally spend a whole day writing about t-shirts. And in return, I don’t complain about you reading this in sweatpants.

I have to say I’m enjoying the trend lately from the merchandise folks to feature things that are a bit more obscure. It wasn’t always the case. Disney World merchandise used to be a homogenized collection of the same old “Fab Five in front of the castle” prints that have been around for forty years. But they’ve stepped up their game quite a bit recently.
Sometimes the average customer isn’t even aware of the insider reference. Like in this shirt from Epcot’s Canada pavilion. 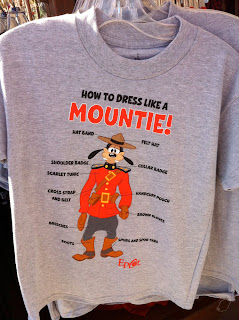 Cute kid’s shirt, right? And specific to a World Showcase pavilion! In the past we would have gotten a generic World Showcase shirt — maybe with Goofy — and certainly not something designed to be sold in only one spot.
But what I love about it is the Disney history on display. How many daytime guests are even aware that Goofy was once known as the star of an entire series of “How To” animated shorts. The series has been abandoned for decades, though it did make a brief resurrection with the 2007 short film “How To Hook Up Your Home Theater,” which played in front of National Treasure 2 (ensuring that today’s kids still haven’t heard of it).
Or you want the truly obscure? How about this beauty from Magic Kingdom: 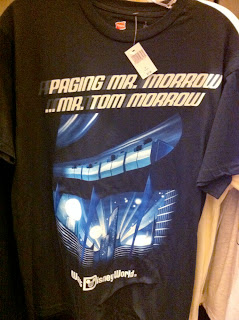 I mean come on! It’s a t-shirt for the PeopleMover! Who would have dreamed that in the Eisner years? Attraction-specific stuff was exceedingly rare, except for the most iconic rides like Space Mountain or Haunted Mansion. The PeopleMover doesn’t even have any characters or storylines to leverage. Yet some one in product development saw fit to give us a whole shirt based on that Tom Morrow gag.
And what’s more, we’ve got Progress City sitting there on the shirt as well! Something that we blow by in less than 10 seconds on the ride, and which 99.9% of the public don’t even realize is a major piece of theme park and Disney history.
Color me impressed. Now where’s my Famed Naturalist John Muir shirt?