Next week, Teevtee continues his series on the Thrilla in Parkzilla, but for now I want you to pick up a dictionary.  College level, if you have it.  Look up the word “Awesome.”  If you don’t see the following image, throw your dictionary away, because it is just a sad waste of trees: 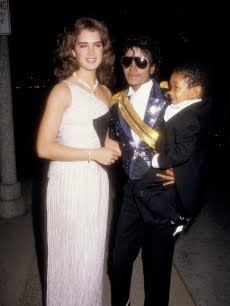 That’s right.  Nothing is as rad as the 80s.  The 80s were a time that could make even the above picture not seem creepy.  We got the same odds on the Pepsi Challenge as we did on guessing which celebrity was Michael’s real date, and most of us still did better on the soda test.

Nobody knows why the 80s were so awesome.  They just were.  Do you know why Phase II of the Pop Century Resort never opened?  It’s because they finished Phase I, saw the 80s building, and knew that they could never top it.  Ever.  It was the last legit hotel to open on Disney property.

The power of the 80s is dangerous stuff.  Imagine a picture of Alf solving a Rubik’s Cube to the musical stylings of Van Halen.  It’s enough to send you into a blissful coma.  And whatever you do, don’t watch Emmanuel Lewis dance to Footloose in front of Cinderella Castle.  If your head doesn’t explode from the sheer awesomeness of it all, then check your pulse, because you were probably dead already.

See, the 80s is the origins for what is probably the greatest self-help technique in all of recorded history, one that Disney embraced wholeheartedly.  Yes, in the 80s, mankind finally discovered the secret to unlocking his true purpose.  To unleash his inner calling.  Smack him over the head with destiny.  Just look at that Emmanuel Lewis picture again (the first one, not the video!  Are you crazy?!  Do you want the world to explode in a fireball of euphoria??).  You can see Michael’s destiny practically oozing out of it.

There are four steps to this technique, and to demonstrate them, I will provide screenshots from a couple of videos from the 1980s park era.  Feel free to try this at home.  You will be practicing your true calling in literally seconds.

Okay, at first glance, this seems hard, but stop your whining.  If magic shaman could waltz through theme park promo films and countless music videos in the 80s, then you ought to be able to scrounge one up. 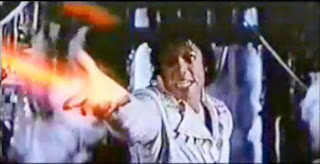 Now the important thing here is to approach the singing magic shaman as if you are a boring (or perhaps monstrous) individual who is trapped in a dead-end job, buried beneath layers of prosthetics, or unaware of their purpose in life (you know, like Neo in the Matrix).

This next part is very important:  Once you have his attention, get the singing magic shaman to zap you with his magic powers. 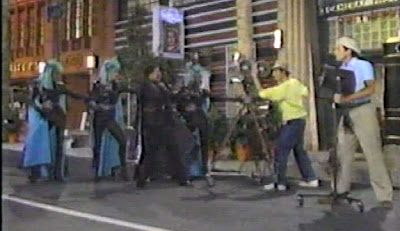 In the above frame from the Grand Opening Celebration of the Disney MGM Studios, the magic shaman is Smokey Robinson, and the boring, dead-end drones are a camera man and a lighting guy — clearly people who need to find their true calling.

Side note:  Singing magic shamans are sometimes accompanied by a trio of David Bowie backup singers.  While you may find this disturbing, it does make it easier to find them.

Once the shaman points his hands at you, remain very still.  You are about to be enveloped by lightning.

This is the actual magical process.  You just need to stand and take it.  It will last approximately 1/3 of a second.  The reason for this is that if it waits any longer, the jump-cut in the video will seem too obvious. 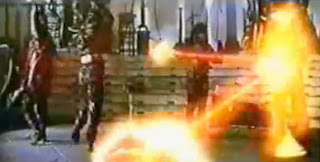 In the above shot, we see several evil guards in the process of being transformed by Captain EO’s magic powers.  Notice that the lightbeams will penetrate several people at once.  This is normal and should not hurt, unless they are coming from the Ark of the Covenant. 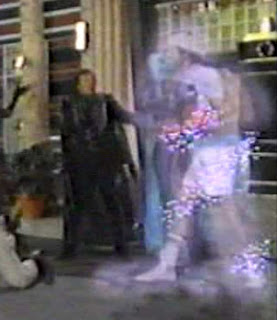 This still from the Disney MGM Grand Opening shows the less intense but more sparkly blue lightning. It also shows some residual magical phenomena known as a “cross dissolve.”

It almost goes without saying, but if you do not act surprised, the singing magic shaman may take it all back.  There are many ways to act surprised:

You can see that our boring cameraman is of the “fling arms” variety.  A second ago, he was just a Hollywood nobody, a union drone.  But one blast of lightning from the magic shaman has transformed him into who he really was all along, deep down inside.  And that someone is Indiana Jones (if Indy tucked his pants into his boots). 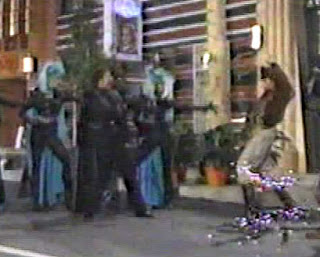 The Captain EO guards are likewise surprised to find that underneath all that evil black leather, they were actually quite fabulous.  They also have the good sense to vary their surprise, to assert their newfound individuality.  Some stagger, some look down in puzzlement, still others appear to be nothing more than a ball of light with legs. 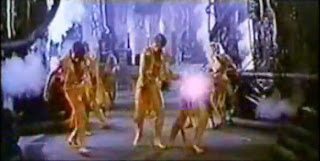 Our Disney MGM light guy is all about looking down.  For him, the real marvel is the gloves.  He dreamed of one day being a boxer just like Rocky, but life intervened and sent him down the dark career path of key grip.  But now thanks to the magic shaman, he has a new lease on life!

Now that you have sufficiently acted surprised for about two seconds, it’s time to strut your stuff.  This is where you embrace your calling with all your heart and begin to live your life anew.  Go on, pirouette.  You’ve earned it. 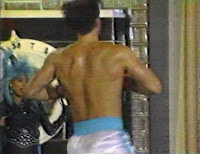 Show the world what you’re all about.  Express your new found individuality by lining up behind the shaman and dancing in synchronization. 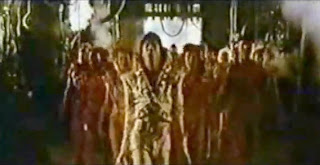 If you have a whip, crack it. 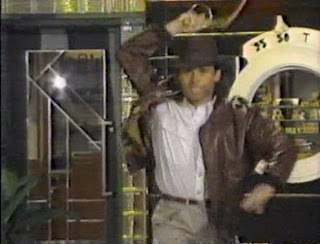 If you have boxing gloves, get low and pretend like you are fighting eye to eye with someone’s stomach.

Just remember that that destiny is inside of you.  We won’t know what it is until we find it.  It might be today, it might be tomorrow, but one thing is sure, the 80s will help you find it.  If we can only follow these four steps, we can all achieve our dreams.  And we’ll probably saturate the market for dancing jobs.