I may not be the biggest fan when it comes to turning Disney theme parks into a shopping mall.  I still miss the days when the shops actually carried unique, one-of-a-kind items.  It was a simpler time, when the experience meant more than spreadsheets, spending trends, and maximizing ROI (which I think stands for “Roy Oliver Isney”)

But while I disapprove of seeing the same “Walt Disney World 2011” sweatshirt sold everywhere from the Emporium to Yankee Trader to Mitsukoshi, I do have to admit, I’m developing a grudging respect for the merchandising folks’ ability to create interesting products, even if they end up homogenized on every resort gift shop shelf.  Here are a few favorites from my rounds this weekend… 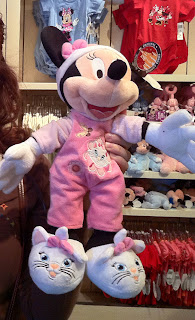 Whoever thought up the idea of character mash-ups should be awarded a medal by the merch department.  Their best work is usually during events.  Especially Halloween, when you’ll see Mickey dressed as Captain Hook, Pluto dressed as Scar, or the Seven Dwarfs as each of Kevin Spacey’s kills in “Seven.”  They’ve also done Star Wars Weekend mash-ups, which give us Goofy as Vader, Donald Duck frozen in Carbonite, and Dumbo as a Bantha (fingers crossed).

But I came across this Minnie Mouse plush over the weekend and thought it was an inspired sort of bizarre.  In case you can’t tell, that’s Minnie decked out in Marie gear.  Yes, Marie, one of the kittens from Aristocats.  Marie has been steadily climbing the charts as a best selling character, in spite of her movie being utterly forgettable.  Blame Japan (they love them some cute kittens).  I don’t mind it so much, as she is obscure enough for me to love also. 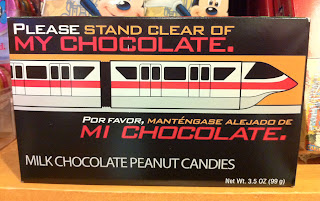 What about this M&Ms knockoff?  There’s actually a whole line of rip-off candy that has rolled out lately.  Dark chocolate, milk chocolate, mints, etc.  All themed in some way to a Disney character.  This one had a special, obvious park connection, made even more awesome by the Spanish echo of the famous monorail saying.

Oh, and speaking of monorails, this next one is officially my favorite new thing about Cars 2, speeding into theaters this summer: 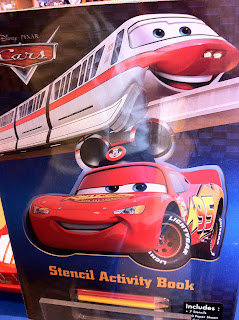 Yes!  It’s a monorail as a Cars character!  Dang, he looks friendly.  They’ve got him slapped on a ton of merchandise at the Studios, and it’s sheer awesome.  For me, Cars is one of those movies that keeps getting better the more times I watch it.  I’m totally psyched about Cars 2, and now I’m wondering if the Tronorail wrap will get replaced with this guy.

Could it possibly get even more awesome?  The answer is yes.  Yes it can:

Yeah, it’s the same Cars-ified monorail, but now we get a Cars parking lot tram too!  Seriously, if they start Cars-ifying all the ride vehicles, my bank account is going to take a hit.  Right now they’re just images on activity books and lunch boxes, but if these things come out as toys, I predict big sales.

So now I guess this makes two merchandise-related posts in a row.  First the balloons, now the mash-ups.  I guess it could be worse.  I could be posting about vinylmation.