With news coverage all over T.V. and the web there is no doubt that everyone is aware of the dramatic and bizarre situation currently unfolding at Epcot.

Rather than trying to add editorial content of our own we will take this time to re-post news coverage (and screen grabs from CNN) of the event and try our best to keep people up to date:

Please note that you should click on all images to enlarage – News coverage starts here:

Walt Disney World Resort, Lake Buena Vista, FL – First it was Tunisia. Then it was Bahrain, Algeria, Jordan, Yemen, Albania, Syria, Lebanon, Egypt and Libya. Now it’s Epcot. Suddenly, civil unrest has erupted in countries, some of which have been under authoritarian rule for decades, all over the Middle East, North Africa and now Central Florida. The most recent developments have seen angry mobs and protesters taking to the promenades of the Epcot theme park near Orlando Florida.

In what can only be described as surreal; Moroccan nationals, mostly college students working to earn school credit, have staged a revolt. 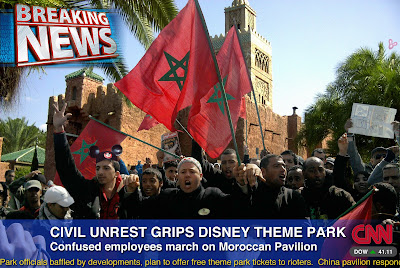 Epcot is the Disney owned theme park opened in 1982 as part of the larger Walt Disney World Resort. It is one part a future themed world’s fair filled with exhibits and family attractions and one part “World Showcase” that house small-scale recreations of eleven countries. These international “pavilions” contain representative shops, restaurants and shows from the individual countries and are staffed by citizens of these countries as part of the Cultural Representative Program.

The Moroccan pavilion was added to the park in 1984 and has peacefully coexisted with neighboring pavilions from Japan and France for the last 27 years. That peacefulness was shattered early Friday morning as protesters demanded independence from World Showcase and called for the end of Disney rule altogether. 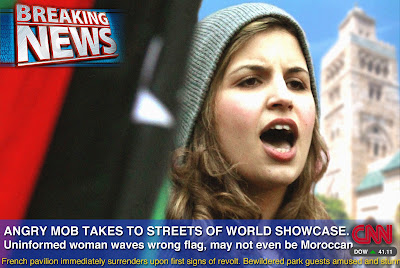 Dozens of anti-Disney demonstrators gathered outside the Morocco pavilion chanting, waiving signs and demanding liberation. Many waved Moroccan flags while others oddly brandished everything from flags of other nations to what appeared to be a gay pride rainbow banner. Many seemed confused as to why they were there and what was actually going on.

The protestors began marching around the World Showcase promenade but clashed with pro-Disney park visitors and security along the way.

What happened? Why now? And what does the future hold for this volatile region of the park? It appears that the protestors (Moroccan citizens and employees of the park known as cast members in Disney parlance) have been encouraged by the recent events from across the globe. Reports speculate that the protestors do not have a full grasp on the situation; they seem unaware that Walt Disney World is not a country and that Epcot is simply a family fun park.

“The Moroccan cast members are free to leave at any time they wish.” said Dan Cockernell, Vice President of Epcot. “Disney is not detaining them nor does the Walt Disney Company govern them in any way.” Always the promoter Cockernell expounded that park officials were caught off guard and were not expecting such a misguided reaction to world events. “We continue to support their quest for democracy but ask that they please return to work so that our guests may enjoy the park including our spectacular 2011 International Flower and Garden Festival.”

Speaking from the capital city of Rabat the monarch of Morocco King Mohammed VI flanked by his brother, Prince Moulay Rachid, and his 7-year-old son, Crown Prince Moulay Hassan told Moroccans’ in an unusual TV speech that he was unaware of any uprising in the United States and that he was not clear on how Disney’s Fast Pass ride reservation system operates. 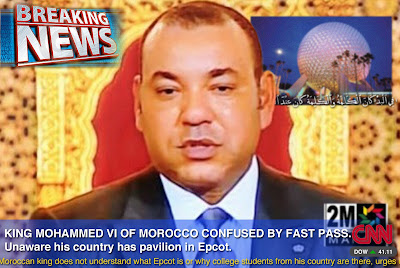 “What is this Epscot you speak of?” Mohammed asked a reporter. “I have no idea what Epscot is or why you ask me about the Mickey Mouse.” The visibly annoyed monarch went on to say; “I once was at the Disneyland Paris and could not understand the line system. Two lines, some people have magic tickets to skip to the front, it is unnecessarily confusing and unfair.”

Opposition leader Ahmed Bebakri has angrily demanded that Disney recognize the Moroccan pavilion as a sovereign state and that they be granted the freedom to charge a separate admission to their pavilion or even to create it’s own rival park.

In an interview Bebakri spoke of his desire to “Shun the oppressive rule of Disney and King Iger.”

“Our brothers and sisters in Northern Africa have shown us that we do not have to live under the rule of tyrants and bullies. When King Eisner was replaced we hoped for democracy but that freedom never came. We now demand our freedom. We wish to declare secession and be allowed to independently rule our pavilion as we please.”

Bebakri disclosed how the protestors are unhappy with many facets of the Walt Disney Company. “They put the characters in every attraction, even when they make no sense. “Saludos Amigos” is set in South America and yet they shoved Jose Carioca in there as part of the Mexican pavilion! Do they even understand that Mexico is not on the same continent?” He rationalized while questioning some of the farthest reaches of the company. “Don’t even get me started about “Spiderman Turn off the Dark”. That’s part of Disney’s empire isn’t it? It’s embarrassing.”

Officials now fear that a widespread destabilization of World Showcase could occur. Tensions are high as the remaining pavilions respond. All eyes are on the German pavilion that has thus far taken no aggressive movement. The Italian pavilion seems to be teetering on the fence and has yet to decide what action to take or which side to back.
Disney ambassador Jennifer Mason reacted swiftly offering free park admission and refreshments to the protestors and other Epcot cast members alike. Mason said, “It is a wonderful, magical Disney day here in beautiful Epcot! Golly, it really makes us sad that some of our fellow cast members are having a crummy time. We want to turn those frowns upside down so we are providing every cast member who reports to the Dopey parking lot a complimentary premium Mickey ice cream bar as well as a one day Magic Your Way passport!” 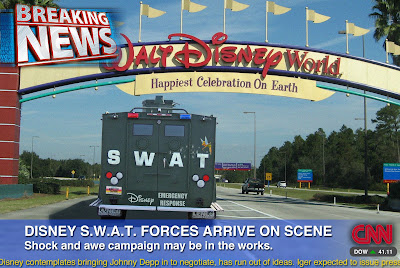 UPDATE: Upon the first signs of protest the pavilion from France has surrendered themselves to the Moroccan protestors. A huge white flag is flying from the scale recreation of the Eiffel Tower that looms over the faux French provincial buildings of the pavilion. It is not clear if the French cast members have deserted the park or if the employees will stay within the pavilion as it is occupied by the Moroccan regime. Park visitors report seeing some French pavilion cast members seeking asylum in nearby pavilions from Canada and the United States. 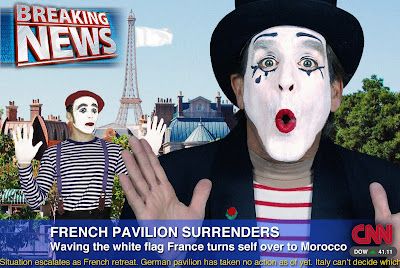 Meanwhile park visitors have been confused by the situation some thinking that the protests are a staged Disney event.

“I really appreciate the attention to detail that Disney puts into the parks.” gushed Frank Pimernell visiting with his family from Shaker Valley Michigan. “They have wonderful regional entertainment like the singers in Canada, the drum guys in Japan and these angry mobs in Morocco. It really makes me feel like I am part of the true Middle East. I grabbed a sign, threw a couple of broken bottles and jumped right in, what a hoot! Only Disney could come up with this stuff.”

Disney has scheduled a press conference for later in the day where company C.E.O. Bob Iger is expected to address the situation and announce further actions. 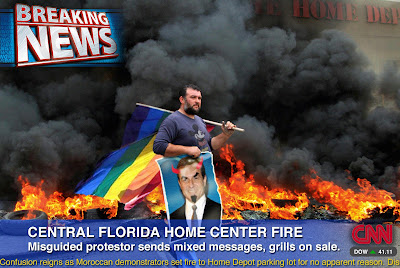 UPDATE: In a related development Moroccan Disney employee Kamal Yousef Siraj set fire to a pile of tires in the parking lot of a local Home Depot home improvement center. Siraj, who had the day off work, waved a rainbow colored flag while toting a poster of Disney executive Bob Iger defaced with devil horns. Siraj said “I stand by my brothers in arms!” When questioned why he chose the Home Depot Siraj continued “They have a good sale on grills, I could use a new one. You know, two birds, one stone.” Siraj had no comment on the flag.

It is amazing that just one year ago today we were taking an in depth look at the unbelievable history of a Disney park classic.  You can find that story HERE.  Now a year later Epcot is in turmoil and the future is unkown.  We will post updates should they become available.