Crowds cram into a small courtyard. The tension is as thick as the air on a hot and humid Florida morning. Tempers flair. An uneasy balance of civility could easily slide into mass chaos at any moment.

Something is amiss, boiling points are being reached and red-faced protesters are eager to let loose their ire. A collective uproar has been corked in for far too long; no longer able to placate the suddenly boisterous masses officials scurry into damage control mode. Things could get ugly and heads will roll. It’s a very serious situation and those in charge likely had no idea what giant they were awakening when they started down the path that led us here. 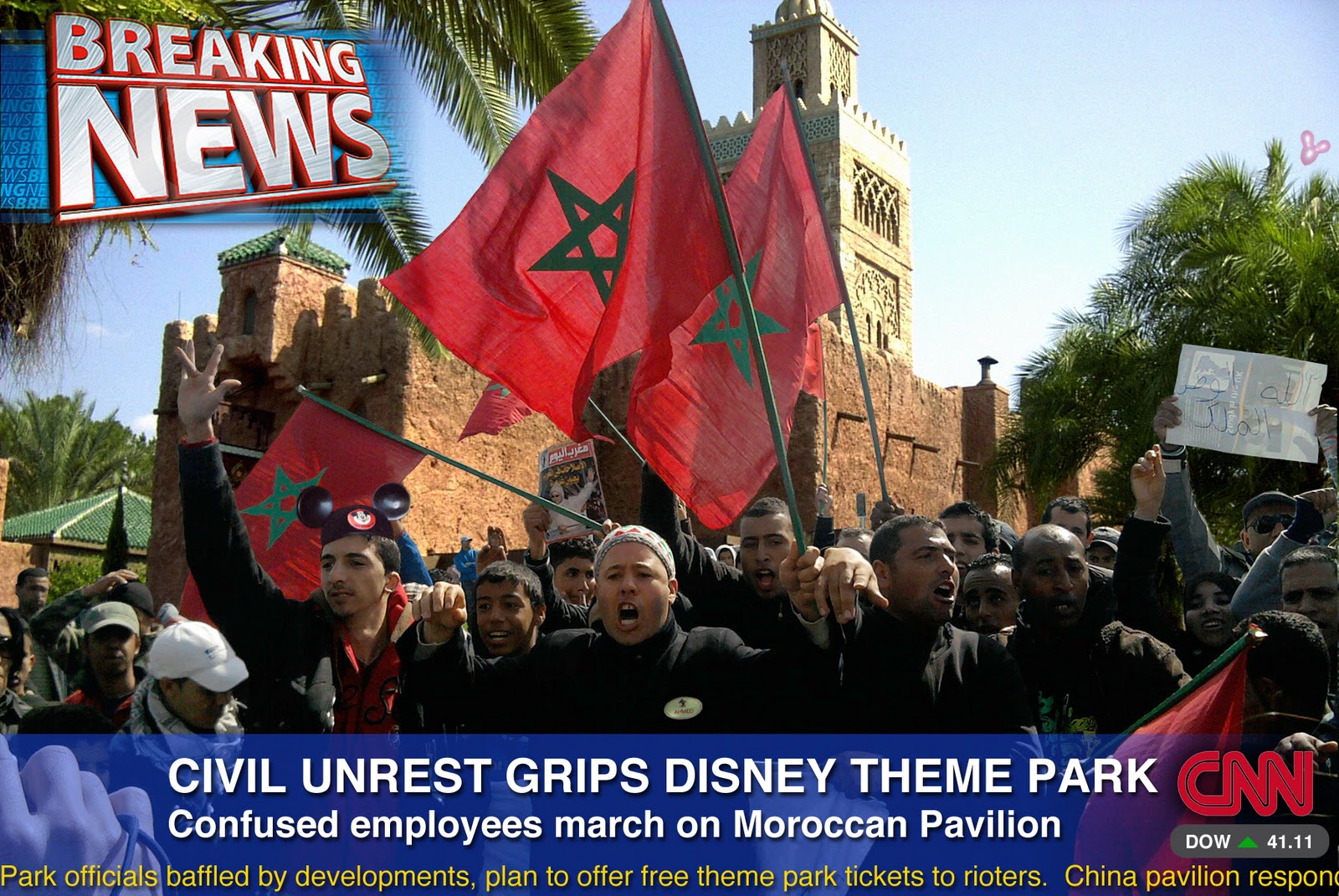 The dragon has been unleashed.

We all deal with daily struggles and we each have our personal convictions so it is rare to have such a unifying outcry of passion, dismay and concern from such a divergent group spanning such a broad cross section of the public. Yet with matters this grave even the most passive souls find their convictions and confront their keepers. We are mad as hell and we are not going to take it any more…

We sat idle when we went to war, we did nothing when our taxes were hiked, and we were silent when our freedoms were stripped away but we will sit idle no more! How DARE THEY remove Figment, our beloved purple avatar representing childhood whimsy and delight from Epcot? NOW YOU HAVE GONE TOO FAR! 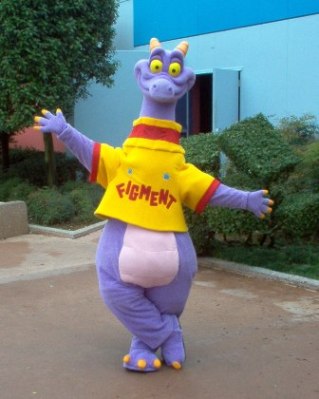 Do whatever you want but do NOT mess with Figment

OK, so in the scheme of world affairs, or really in the scheme of pretty much anything else, removing a cartoon dragon from an aging theme park attraction ranks pretty low on the scale of things to be concerned with. Yet that decision made sometime in the late 90’s by potentially clueless Disney executives caused quite a stir among the Disney’s faithful. Those who live and breathe the parks and grew up with fond memories of Figment’s catchy theme song could not imagine a world without him. Petitions were signed, web sites were created and then CEO Michael Eisner was directly confronted about such matters during the open mike session of the annual stockholders meeting. Clearly Disney made a PR misstep and in a rare concession to fans added Figment back into the ride (more on that later).

Sometimes it’s the little things that mean the most. Over the years Disney fans have reacted (perhaps over reacted?) to changes made to the parks and have caused all matter of trouble for those operating them. With the creation of social media reaction to even the smallest of changes is swift and widespread. People don’t like change, especially when it revolves around beloved child-hood memories.

These uprisings tend to occur when a much loved (and often original) attraction is removed or altered for what is perceived as an inferior replacement. They also tend to be fairly recent as it is just in the last 20 years or so that the Internet has made these concerns blossom from small local outcries to worldwide fan hysteria.

Plus we admit it; Parkeology.com has been slow this summer. We should be writing more.Or we can be lazy and simply stretch a longer post out over several days.

With that said we are kicking off a series searching through the Top Ten Disney Theme Park Controversies (or T.T.D.T.P.C. if you like useless acronyms). One new entry a day for the next 2 weeks or so.

Finding an actual order is tough, at the top of the list they all created quite a stir, but lets kick things off with a seemingly great idea (if you are CEO of a fortune 500 company):

Back in 1997 Disney started a 10-year agreement with McDonald’s to sell the fast food giant’s offerings on property at Disney resorts and even within the parks. It seemed like a powerhouse combo with both companies dominating their respective fields and both having a longstanding family friendly image. However as with most things Disney related some fans thought differently. They did not take kindly to the idea of Ronald McDonald gallivanting around hand in hand with Mickey Mouse. No one wanted to see Grimace take up residency in Fantasyland or Mayor McCheese lord over the Magic Kingdom.

it was mostly just stuff like this… nice wheel BTW Disney.

Ultimately the initial fan reaction was overblown. In reality McDonald’s had a fairly small presence limited mainly to one small location in each park selling McDonald’s fries and sometimes McNuggets. When Disney’s Animal Kingdom opened in 1998 McDonald’s had not only a fry location (the pun-rific Petrifires) but also a somewhat expanded menu at the largest restaurant in the park the Restaurantosaurus (they were really reaching for names back then). McDonald’s logos were not all that prominent on the food locations limited to discreet locations and small sizes. However McDonald’s also sponsored the major thrill ride at the park then named “Countdown to Extinction” later pointlessly renamed to the much more obvious “Dinosaur” (which today with it’s namesake movie long forgotten just seems idiotic). As it’s sponsor a McDonald’s logo was a prominent part of the attraction marquee for many years. 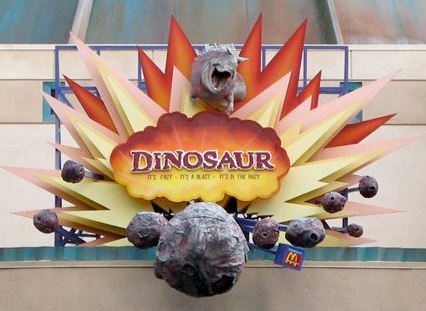 The logo remianed small even when the name was changed

Two full menu locations were opened on property but not in the parks. One near the All-Stars resorts )featuring a hideous mash-up of McDonald’s characters along the exterior) should of raised fan concerns based on nothing more than the eyesore it caused. The other was located at Downtown Disney. Today only the All-Stars location remains and fortunately was remodeled in 2009 to become a modern and almost sleek rendition of the chain’s brand. 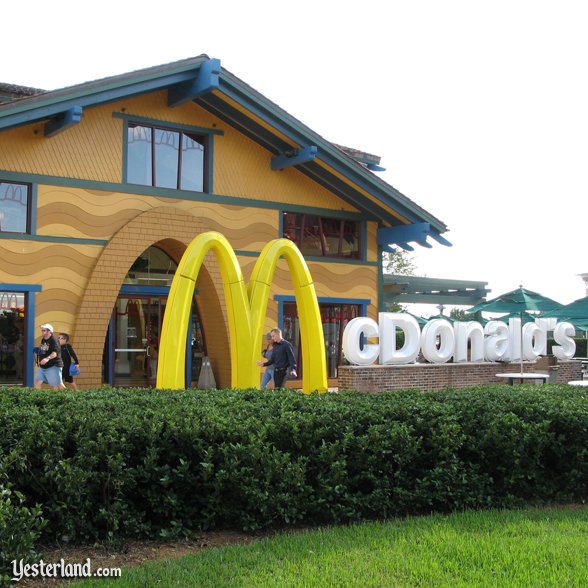 This was the Down Town Disney location… the nicer of the two full service locations. Photo courtesy of yesterland.com

McDonald;s agreement ended in 2008 and they are no longer present in the parks. Today we are seeing a similar outcry as Starbuck’s continues to roll out into the parks and resorts. Again they are being done in a low-key and fairly tasteful manner and fans have grown to accept it. Of course the Disney parks have a very long history of corporate sponsors including food and beverage sponsors dating back to the very opening of Disneyland in 1955. Perhaps this was a controversy that never should have been? 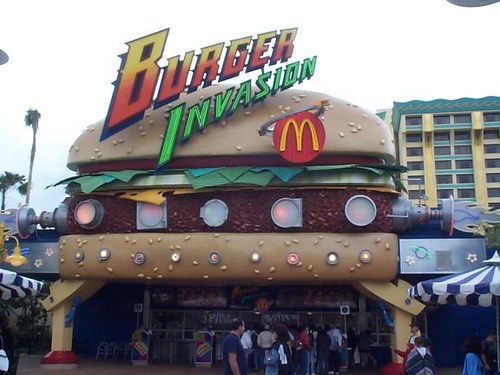 Many fans did not appreciate being invaded

With time we forget the concern and even outrage than was present at the time of this and most of the other events on our list. Nevertheless there was fear that somehow McDonald’s would cheapen the Disney image. Fans seldom like to see outside interests infiltrate the parks… something we will see again in future entries.

Click here for number nine as we continue the countdown.

In the meantime do you remember when McDonald’s invaded the Magic Kingdom?