It’s hard to believe there have now been three new Batman movies. I still feel like the third Batman movie is the one with Jim Carrey. How could that possibly have been 17 years ago? There are NBA players who are barely older than that.

At least The Dark Knight Rises is not being released in 3-D. This was clearly an artistic choice, not a financial one. Christopher Nolan probably figured the picture was going to be dark and gloomy enough without putting on those horrible glasses. I’m not a fan of this 3-D trend. I’m hoping it dies a swift death, just like those annoying “talkies.” But apparently this is what the public wants. I applaud the studio for their gutsy restraint. Without 3-D, this Batman movie is obviously doomed to miserable failure. 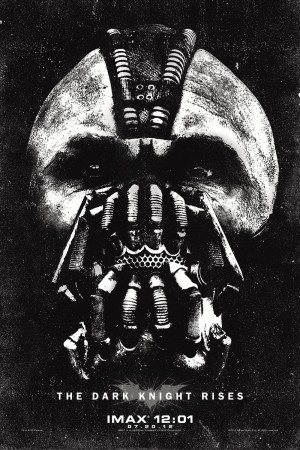 But I still like other kinds of 3-D. Theme park movies for sure, as long as they are not by Universal (I’m pretty sure that Shrek thing was featured in the final death scene of Saw IV). There’s a charm to Muppets, Magic Journeys, Captain EO, Philharmagic. Mainly because they use the 3-D gimmick to its fullest extent, which is something a Hollywood movie like The Avengers can’t do, if it wants to stay true to its storyline. I suppose that’s a good thing. If Imagineers got their hands on it, we’d be hit with Hulk flop sweat every 30 seconds, and Captain America would be slinging his shield at our heads for the sheer shock value of it all. And then someone would burst into song (probably Iron Man).

But there is another kind of totally awesome 3-D: The View-Master. We had these as kids. Presumably, they are still around. You can see larger-than-life View-Master slides in the Toy Story Mania queue, but I really don’t see them in stores anymore. Before Hooter ate the map and Captain EO crash landed in Tomorrowland, kids were living the 3-D Disneyland experience thanks to a little plastic toy available in every K-Mart in town (we didn’t have Wal-Marts back then).

They’re hot collectors items now, because kids today aren’t impressed by a clicky slide show that you hold up to the light. Nintendo makes a 3-D hand-held video game system that doesn’t even require glasses, and the entire Super Mario Bros. series can fit on something smaller than a single View-Master slide.

Disneyland made some awesome sets back then. Here’s one available on Amazon: 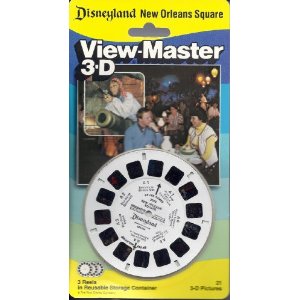 Just looking at this image will take 20 years off your age. And then you can go watch that Jim Carrey Batman movie.

Pretty neat, right? Pictures of New Orleans Square, as it appeared in the 1970s. Including an entire slide of Haunted Mansion scenes.

There’s something about Haunted Mansion that just seems to fit with the whole View-Master gimmick. All its best effects are low-tech renderings of three-dimensional ghosts. The Ballroom Pepper’s Ghost trick, the hitchhiker one-way mirrors, the floating candelabra.

When they did the latest round of enhancements to the Magic Kingdom Haunted Mansion, they added some blinking eyes to the hallway of doors, to smooth out the transition from the M.C. Escher staircases. Green, ghostly eyes blinking in the darkness, eventually blending into the wallpaper.

One night, I snapped a picture of those blinking eyes. Yes, I used flash. If you’re one of those moralists who think that I have violated the most sacred theme park rule of them all, I would like to point out that it was during a rainy Mickey’s Christmas Party and I was the only one on the ride. Except for that British couple with the terminally ill child who had saved their entire life for that one trip on the Haunted Mansion. I still don’t know what their problem was. 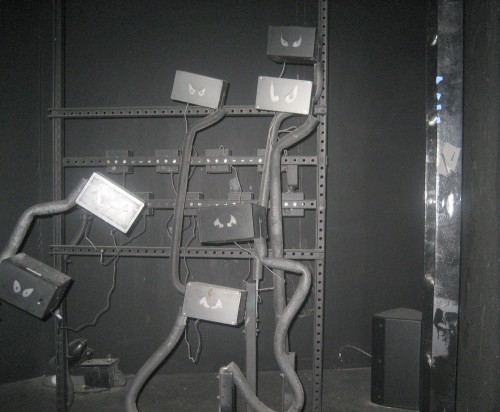 I obviously didn’t see the results of my illicit flash photo until I was back home, because I’m not one of those jerks who will flip through the illuminated display on my camera while riding a dark ride. I have my iPhone for that. But when I finally got a look at the Haunted Mansion eyes, they reminded me of nothing so much as a black View-Masters mounted on PVC pipe. 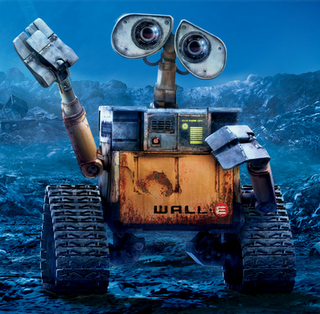 Or the stuff of Wall-E’s nightmares.

I thought you might be interested in having this wonderful little effect spoiled for you as well, so I’m happy to share it. I like to think that behind each of those eyes is a nostalgic ghost, looking out at us in glorious View-Master 3-D and wondering if the park will close in time for him to catch the midnight showing of Batman.