A while back, I praised Universal’s Wizarding World of Harry Potter for creating the perfect theme park food crossover. Famous fictional food in a theme park is something Disney has never quite mastered, though they do allow you to eat famous fictional mice for every meal of the day.

But now that bare-bones approach is about to become extinct.

Today was my first opportunity to sample the many new shops and food locations that have sprung up in Animal Kingdom, and I’m here to declare that a new theme park treat champion has been crowned.

Zuri’s Sweets opened only a few days ago, and features exciting and strange beef jerky flavors, African infused olive oils, and candy dispensing machines that actually dispense trail mix and other exotic combinations instead of M&Ms and Reese’s Pieces.

It’s one of Disney’s better attempts at merchandising in recent memory. It has not yet been overrun with the same generic merchandise that you can find everywhere else, and even the Timon and Pumbaa gummy candies at least have an African slant to them.

But the candy and pastry counter caught my eye. Not because there are new elephant and monkey candy apples, but because for the first time anywhere, a theme park is offering an assortment of pastry animal poop that you can buy. 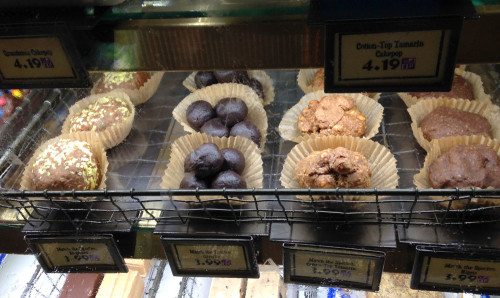 No joke, it is a series of pastries called “Match the Species,” and they are designed to look like the bowel movements of exotic animals. There are four flavors.

We did not sample any of these delectable dishes, because we had already just come from the bathroom. But otherwise, I can assure you we would have been all over these like flies on… well, tasty chocolate scat, I guess.