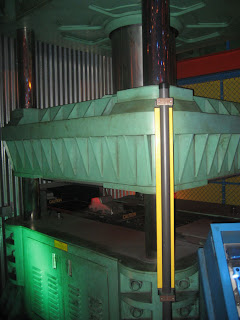 Test Track is one of Epcot’s most popular attractions, but its best illusion may be an overlooked part of the scenery in the exit area.  Most visitors hurry through the factory set on their way to the GM showroom, yet the factory contains more detail than most of the ride: everything from plant employee lockers, a tableaux of welding robots, and an assembly line die press.

At first glance, the die press doesn’t seem all that interesting.  Sheet metal appears from under a chute leading onto a conveyer belt, which passes under the press.  The press is lowered and raised, and the stamped parts proceed along the belt before disappearing into darkness.  It’s just another part of the background, an endless manufacturing line — until one wonders:  where is all this raw material coming from? 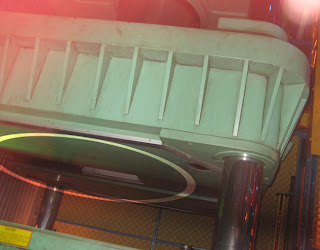 What really sells the effect is the sound.  We are treated to heavy machine sounds with each depression, along with the whir of the belt as it moves along.  But these are only recordings.  The press itself is nothing but lightweight fiberglass (why spend energy to raise and lower a heavy press all day long?).  The belt itself is silent, allowing it to whir back into place when the die press is down.

It all adds up to one of the best illusions in the entire pavilion.  A simple effect that doesn’t call attention to itself, and gives viewers no reason to doubt its realism.  But I bet next time you’ll make a point to stop and check it out.