Parkeology was on location at Disneyland Paris the other week. We discovered things both expected and surprising.

Disneyland Paris features Discoverlyland in lieu of Tomorrowland. It is meant to serve as an ageless look into the future as imagined by Jules Verne. One surprise came at the realization that the costume designers confused Jules Verne’s 1886 with Bill Cosby’s 1986: 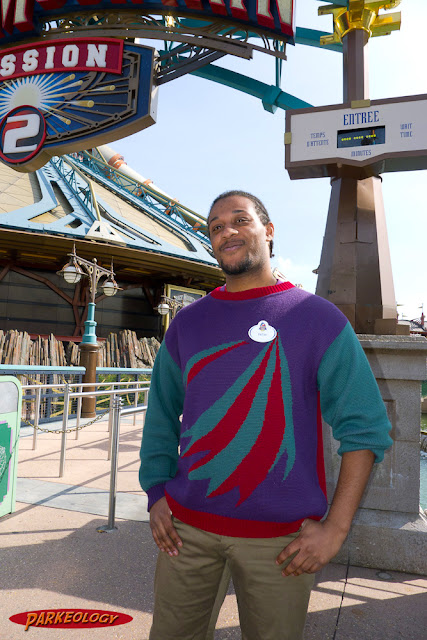 Last week there was an accident on Big Thunder Mountain at Disneyland Paris. This was a week after our return but it was still sort of creepy to hear about this happening so closely to the time we were riding it again and again and again (my daughter would still be riding it if she was allowed).

You may want to check out the posts here from the Disney and More blog… Alain does a good job keeping up with the goings on at Disneyland Paris. Ironically the avalanche scene really did drop a rock onto the tracks, the train hit the faux rock and debris hurled into some passengers, one of which was seriously injured. It sucks.

This is what may be the biggest surprise of our visit and one that honestly should probably not be a surprise… that is the general shocking and even appalling condition of much of the park. In the near future we will post some on the flip side of this, in other words some of the cool things being done well there, but in light of the accident I wanted to share some snapshots from a couple weeks back.

It is true that we have no idea what caused the Big Thunder accident but one leading theory is poor maintenance, I think we take for granted that Disney parks will be clean, well run and in nearly flawless shape. People get all worked up when a trash can has not been painted this week or when some paint on the upper tiers of Space Mountain starts to peel… but we are talking a whole different league here folks.

The Pirate ship in Adventureland is a central key feature. Much of the land is designed around it, it was once a beautiful focal point…this is what it looks like today, right now:
(Click on them to make them larger) 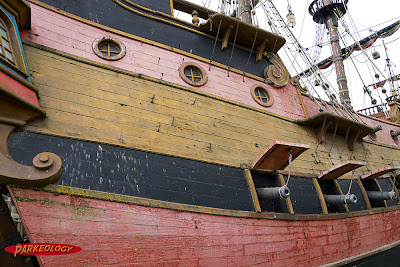 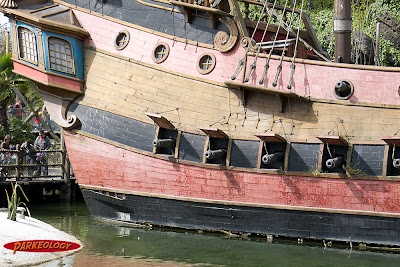 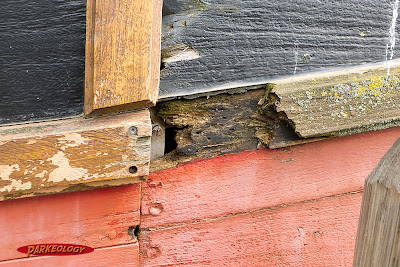 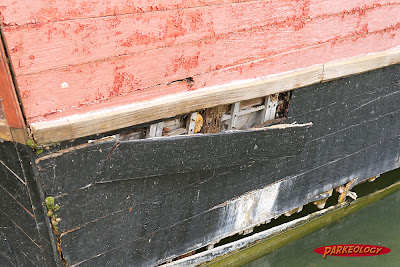 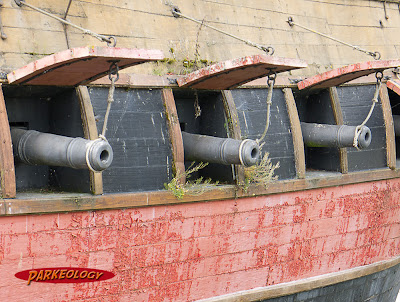 Yea, they have announced that this entire ship will be scraped and replaced in time for the 20th anniversary of the park next year… but how could this be allowed to get to this state? How could they allow it to sit there right now like this? Do they expect people to be excited about this finally being addressed after two decades of neglect?

How about that Discoveryland we mentioned before… it’s holding up right? Well the cost cutting is clear everywhere, ranging from showing old movies on screens at Videopolis instead of live stage shows (the guide promises a live Lion King show… it is not playing) to much worse.


The French version of Space Mountain is undoubtedly the best. Not just because it goes upside down, in fact I hold that against it, rather because it has a very cool Verne from Earth to the Moon theme, onboard sound and a magnificent show building. One of the key and coolest features of the show building is that giant cannon sitting along the side. Guests used to be blasted out of the cannon with a huge “boom!” and a billowing puff of smoke. Today neither the smoke nor the recoiling motion of the cannon (or the sound) work. Worse yet rust is streaking down the sides and the new “mission 2” show is a huge step backwards from the original. Oh well.


Sometimes it is not big expensive things… ever hear of a vacuum cleaner guys? I think vacuum is a French word… Le Vacuum s’il vous plait?


And speaking of big expensive things… it looks like they are going to allow the Nautilus to head the way of the Pirate Ship. It HAS to costs less to fix this thing now than is does to replace it in 3 years… or maybe they will just shut it down and remove it like they did with the once (but no longer) functioning geysers in Frontiereland. By the way, most of these shots were taken the actual first day the Nautilus came back from a month long rehab… what exactly did they do during that time? They did not even bother to clean the garbage out of the pond. Imagine what it was like BEFORE the rehab! 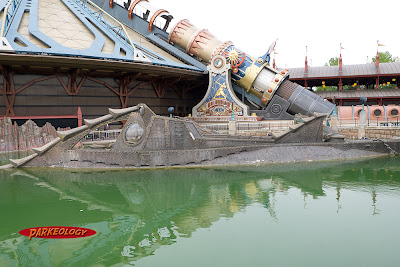 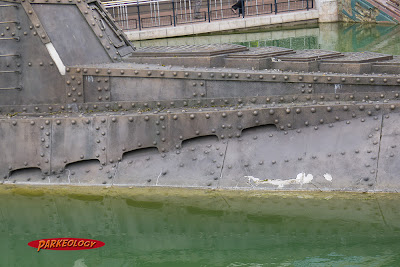 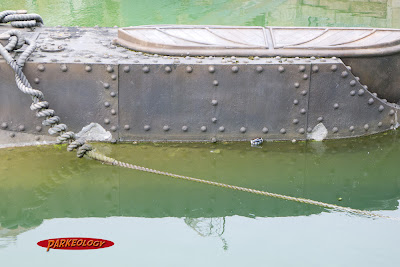 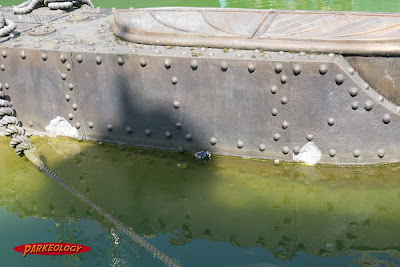 Pirates of the Caribbean actually just came off a month long rehab as well and yet the sword fighting pirates were hidden behind a thatched curtain for a good part of our trip (when they are broken they are hidden from view) and the once swinging pirate is now the motionless hanging pirate… I guess it takes some work to keep these things functioning huh?


Check out these shots of the concrete in the large plaza area between Disneyland Paris and the dreadful Walt Disney Studios Paris (better than years before but still amazingly bad). Again, these are not some isolated small patches of hidden concrete… this is what the majority of the ground is like, you cannot walk without navigating large potholes. This type of thing exists in the actual parks as well. 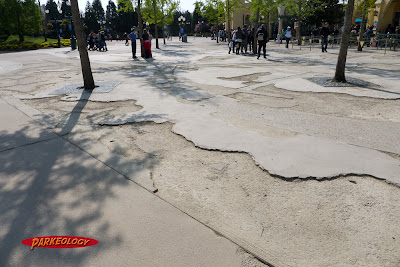 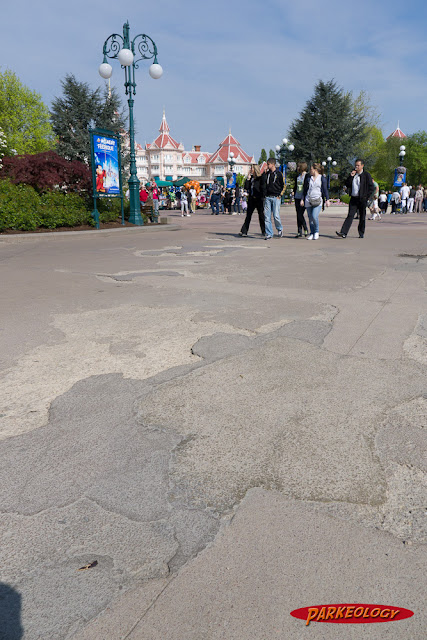 I could go on and on, there really is this type of thing all over the parks, especially the older and much more detailed Disneyland Paris park.

In 2005 I was standing in one of the covered arcades that run parallel to Main Street. As I was admiring a display I heard a loud snap and a decorative piece of molding came tumbling down from the top of the display. This is a piece of wood molding about 3 feet long, is crashed to the floor nearly hitting me on the head! I took the wood and leaned it on the display, assuming that it was a freak occurrence and that it would immediately be repaired. In Japan the arcade would be shut down while teams of uniformed workers rebuilt the entire complex, probably repaving sections in gold and magic but this is Paris not Tokyo… I did not expect much. Well 6 years later that same molding is still missing from the same display… simply never replaced or perhaps even noticed. A sign of unfortunate things to come.


Now to be fair they are currently repainting the castle (it needs it), recently rebuilt the Molly Brown paddle wheeler (which was in almost as bad shape as the pirate ship) and have been repainting much of Main Street (of course the tarps are un-themed white eyesores but there is painting going on at least).

I think the current management has realized how horrible parts of the park are and they are desperately trying to address some of this prior to the spotlight that the twentieth anniversary will shine on them. But for example the rehab plans do not address the Nautilus or Space Mountain at all. They seem to be trying to spruce up some of the more obvious and famous facades while letting others fade… and don’t even think about something as unheard of as adding a major new attraction.


Europeans do not have the same admiration and social respect for the parks as Americans (and certainly not the Japanese) have. This general chaotic nature of the guests makes it challenging to maintain the park. During a small parade all hell broke lose with guests climbing over fences, trampling landscaping and generally acting what we would consider to be rude. But that is cultural differences and should be expected… but the lack of any Disney supervision or guidance is still shocking.


At one point we were trying to cross the street prior to a parade heading in. The cross path was clearly marked but several guests were sitting in the crosswalk smoking and blocking the way. A cast member was standing feet away… when I asked him to move the guests he shrugged and looked at me as though I was insane… then motioned to climb over them as though he could not be bothered.

The park still is wonderfully designed, contains some impressive attractions and could be a true gem, but alas it has been allowed to decay, to literally rot in some cases. It is likely that we hit it at a low point, that it has never been worse and will only get better… but should it ever have been allowed to get to this point to begin with.

Wake up guys! Allow me to translate: