I will go ahead and admit it. I have not ridden Expedition Everest since the big #WDW47 hullabaloo back in June. That was more than three months ago. A hundred days of broken-yeti-free parkeology. Probably a million other people have ridden Everest in that time.

This is a roundabout way of saying that the Everest queue has added something since the last time I waited in it. There’s a little room just before the loading station where the Stand By queue does a little switchback dance on the left while the Fast Pass line mirrors them on the right. At some point in the last year (years?), they added some fun little antiquated slide screens on both sides of this room.

Kali River gets some love in amongst the jokey posters

These screens are intended to function much like tourist brochures, like the kind you often see in Interstate rest areas or at Medieval Times or at the base camp of the world’s tallest mountain. It’s a bank of four screens, showing posters for local attractions, which rotate every so often by sliding up, as if Gupta or somebody was projecting them from his 1970s area Kodak slide carousel. 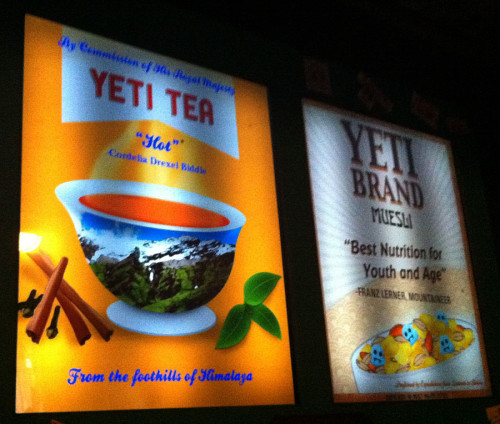 The posters themselves have the standard Disney puns which are a prerequisite for this type of copy. “Are we there yeti?” and that sort of thing. They are nicely done. My favorite detail is that there are literally animated flies crawling over these projections — exactly as there would be in the Himalayas. There’s not really any point to the posters. Just another layer of detail on top of an already densely layered queue. 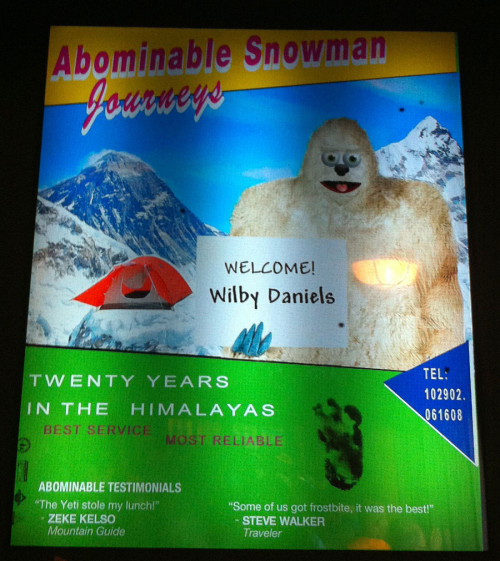 A distant cousin to Bumble the Abominable Snowman with the Toothache

This last poster caught my eye and tingled my spidey sense. I love it because I’m a fan of anything that remotely relates back to Disney’s pre-High-School-Musical history. Note the name Wilby Daniels. It’s just unique enough to stand out — and for good reason. Wilby Daniels was the name of Tommy Kirk’s (Disney Legend!) character in the 1959 comedy, The Shaggy Dog. In the movie, Wilby finds a cursed ring which turns him into an enormously fluffy sheepdog. Which is itself only a few steroids away from an enormously fluffy yeti.

All of these films are decidedly non-art-house fare. It makes me wonder if Expedition Everest: The Legend of the Forbidden Mountain considers itself to be a screwball Disney comedy. It might explain That Darn Yeti Kitty.