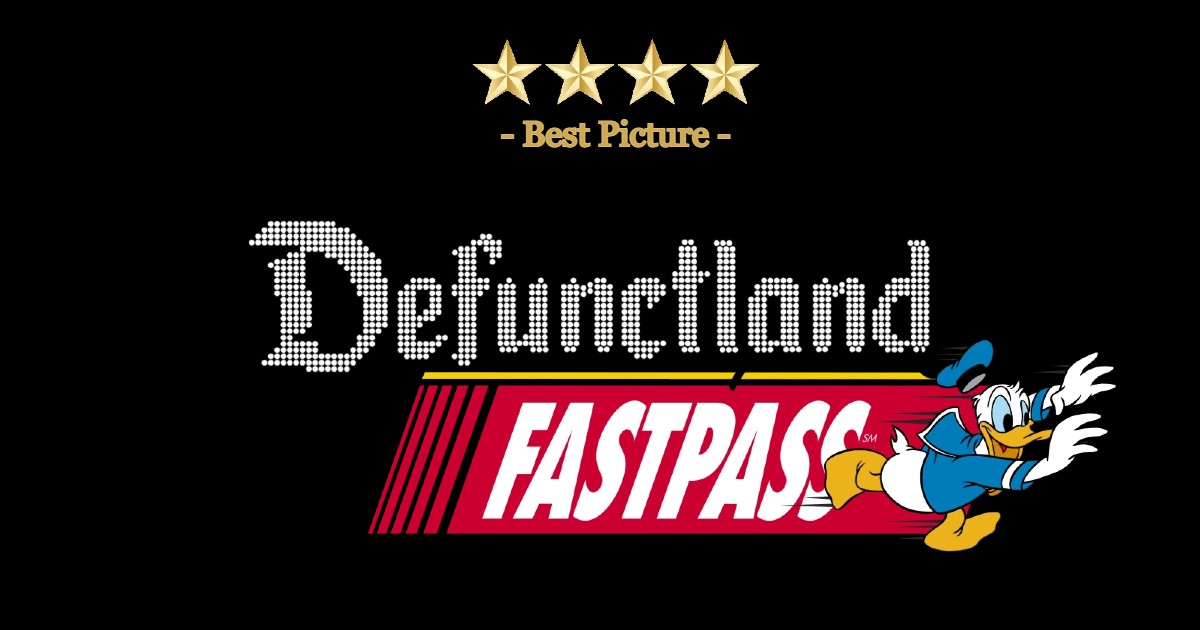 In November 2021, a feature-length documentary about theme park lines dropped on YouTube before an unsuspecting public. If Genie+ is the year’s biggest Disney powderkeg, the Defunctland FastPass show is like dropping a lit match into the barrel. It wants to blow the lid off the whole conspiracy.

It may just be the most fascinating movie you’ll see all year.

Over the course of an hour and 43 minutes, the episode meticulously documents the history of Disney’s infamous wait times, the attempts at fixing them, and the solution we ended up with.

Not too long ago, acclaimed Hollywood directory Steven Spielberg theorized that filmmaking technology was moving at such a pace, it would not be long before the next great movie would come from a little girl in Iowa. Today, Defunctland is that little girl.

It doesn’t matter whether you believe the conspiracy or not. It’s still a compelling story. Here’s our “Best Picture” campaign for the Defunctland FastPass episode.

Like all great films, at the heart of the Defunctland FastPass story is a hero. In a world of famous Imagineers, aspirational CEO’s, and obsessive super-fans, he’s a relatable everyman. The guy you’ve never heard of.

Laval would rise from the ranks of obscurity at Walt Disney World to eventually create one of the industry’s biggest game-changers. The FastPass ride reservation system.

And like many heroes before him, Laval had to watch as his creation mutate into something from which there may be no escape.

We are not joking. The Defunctland FastPass episode literally shows you the monster.

But the real antagonist turns out to be an amalgam the usual suspects — easy targets like Pressler, Eisner, and Chapek. A cigar-chomping executive who sees nothing but dollar signs when one of his underlings figures out a way to squeeze even more out of the guests’ wallets.

A Twinge of Nostalgia

For all the perils that the Defunctland FastPass documentary tries to warn us about, it’s not above tapping into a certain nostalgia for the original paper FastPass system.

A certain undeniable charm attends almost anything from Disney’s storied history — nothing more so than the occasional blast-from-the-past commercials that would run on the Resort TV channel.

Yellow-Shirt FastPass Guy snapped me right back to those earlier times, when the system was more or less equal (though not totally, as the documentary informs us. It always benefited those super-fans who had a much better grasp of the ins-and-outs of the Disney systems). Anyone traveling to Disney in the early years of this century is familiar with the ritual. Insert park ticket, receive FastPass. And all the ways that came along to game the system.

It proves a slippery slope. Simple rules give way to complex ones. More and more attractions want to buy into the game. Eventually everything turns to the uber planning of FastPass+ and we’re off to the races.

Like any great movie, the Defunctland FastPass epic is full of quotable lines.

When a lucky family happens to grab the 100th million FastPass of the system, they are rewarded with a special Golden FastPass with instant access to all the rides. One of them remarks “Things like this don’t happen to the Dillons,” which is the set up to one of the film’s most delicious treats — an entire chapter intro in which it seems that this FastPass documentary is going to turn into an extended 300-year history of the Dillon Family.

It’s just a gag, but a brilliant one.

Bob Iger gets in one simple but effective line. When Disney spends nearly $1 billion on the paper FastPass replacement known as FastPass+, the company’s CEO clearly has red alerts sounding in his ears. He delivers a chilling warning to Parks chairman Tom Staggs. “This better work.”

But the most fun comes in the second half of the movie, when Defunctland unveils an entire simulated theme park experience for the sole purpose of testing out the various line-reservation systems that Disney has employed over the years.

The park is Shapeland. And its rides are all linked up to FastPass. There’s the Sphere, the Oval, and the Octogon. But as all guests of Shapeland know, “Everyone wants to ride the Triangle.”

The film is a microcosm of the theme park cultural battle brewing today. In fact, it’s been brewing ever since that first FastPass system.

It’s a war between the Haves and the Have-Nots.

People either love FastPass or they hate it. And the breakdown tends to fall right in line with how well you understand the system.

There’s a crazy moment halfway through the movie, right after Staggs rolls out that billion-dollar FastPass+. We’re treated to an extended montage of vloggers expounding on their own tips for how to maximize the system. The vloggers aren’t wrong. But it perfectly illustrates how far we’ve come from just sticking your ticket in a machine and getting a piece of paper.

Like all good thrillers, the Defunctland FastPass third act throws an impressive curveball. That’s when the mask comes off and they reveal what Shapeland really is.

I won’t spoil it here. But it’s a “gotcha” moment that the movie earns by everything that has come before.

It leads straight into Genie+ and the second great montage of the movie. No vloggers this time. Just an attempt to explain all the complex rules between Genie+ and Lightning Lanes. And somehow that montage feels even longer.

It quickly becomes clear that we haven’t solved everything yet.

Do yourself a favor and watch Disney’s FastPass: A Complicated History by Defunctland. We give it two thumbs up. Four stars. 100% Fresh.

It’s the most fun you’ll have at the movies all year.