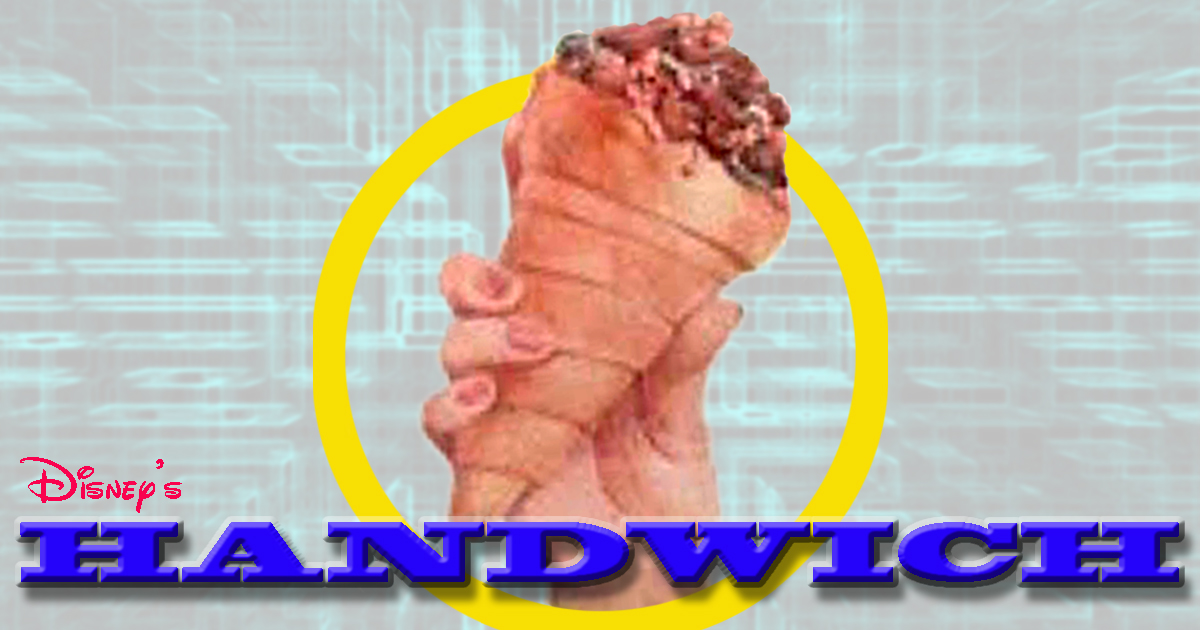 Be sure to read to the end for a newly added (some might say shocking) update to our original post!

Once upon a time Disney had a revolutionary idea that was going to transform the future of food, so what went wrong? 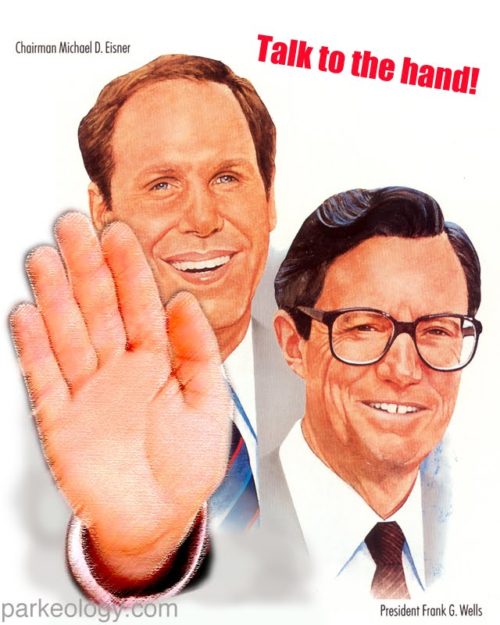 When Michael Eisner and Frank Wells took the reigns of Disney in 1984 a lot of work needed to be done.  Primarily there were four paramount tasks the new team had to tackle, the four fundamental pillars of success:

2) Revitalize the once proud animation studio and return it to its former glory.

3) Expand the theme parks both domestically and internationally while dramatically increasing hotel rooms offered on property.

And perhaps the most important of all:

4) Revolutionize easy to eat on the go meals in order to rid the world of the unwieldy and outdated sandwich.

Any way you look at it Eisner and company deserve a hand, and 3 out of 4 is not bad.

Sure enough, the new regime succeeded at turning around the live action studios at Disney.  They transformed a dormant, moribund industry joke into a Hollywood powerhouse.

They led Disney into the new golden age of animation producing many modern classics and setting up an overall animation renaissance.

New parks were opened in Florida, Paris, California, Tokyo and Hong Kong with deals put in motion for further expansion into Mainland China. Dozens of new resorts and thousands of hotel rooms were added to the properties and the Disney Cruise Lines and Vacation Clubs further established Disney as a leader and pioneer in the travel and leisure worlds.

And then there was Disney’s Handwich. 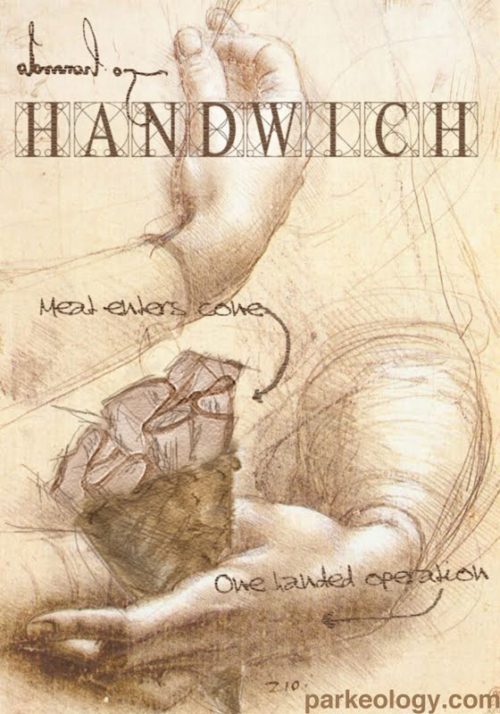 The origins of the Handwich go WAY back.

Yes, the sandwich of the future here today (or at least it was in the late 80’s).  So sleek, so simple, so much easier than the bewildering complications of a normal sandwich.  Disney’s Handwich set out to revolutionize the commercial culinary landscape and do away with the old-fashioned, cumbersome traditional sandwich once and for all. 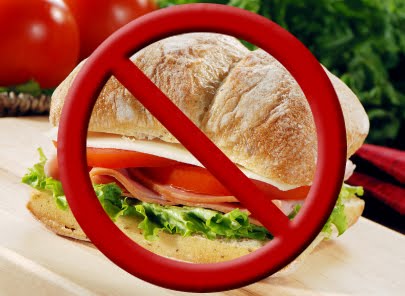 How many years was the theme park going public expected to endure the inconvenience, the confusion, and the sheer indignity of a plain old sandwich? How long were we to be entangled in the enigma of multiple slices of bread, meat and condiments requiring not one but two hands to dispatch? NO MORE! declared Eisner. The dark ages of cold cut consumption had come to an end. (Just in time, I was running out of pleonasms). 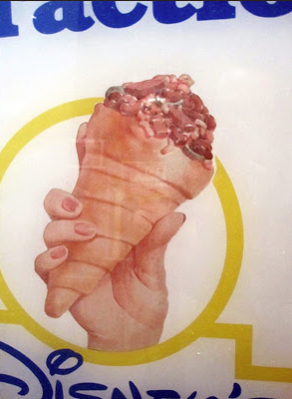 The Handwich was born to make concurrent eating and walking much more efficient.  No longer would people have to pause to enjoy a meal or God forbid sit down and relax. Now with a free hand, we were liberated to ramble around the park, eat Texas style BBQ, and comb our hair simultaneously!  Have you ever yearned to enjoy a tangy Italian sub sandwich while standing in line AND walking the dog on your yo-yo all at the exact same moment? Your dream had become a reality! 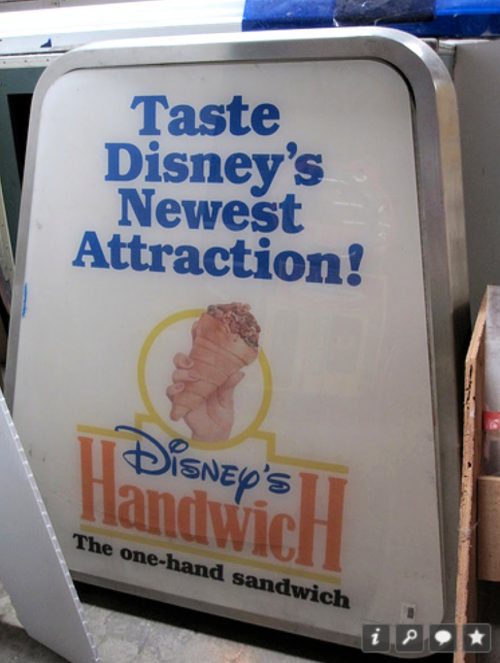 This priceless relic of the past is now proudly exhibited at the Walt Disney Family Museum and considered one of the Walt Disney Company’s crowning achievements… I assume.

Basically a large soft bread ice cream cone stuffed with cold cuts, salad, or veggies, Disney’s Handwich was primarily sold in “future” themed locations at the parks: in Tomorrowland at the WEDway Space Bar (currently the Lunching Pad) located at the base of the Rocket Jets and the Farmer’s Market food court at EPCOT Center’s Land pavilion (later known as the Sunshine Season Food Fair and currently simply Sunshine Seasons).  A hoagie this forward-thinking could never be seen in such antiquated environs as Main Street or World Showcase. No, this was the Dagwood of tomorrow, the grinder of the new millennium, the fantastic future food we would all be enjoying in the 21st century and beyond. 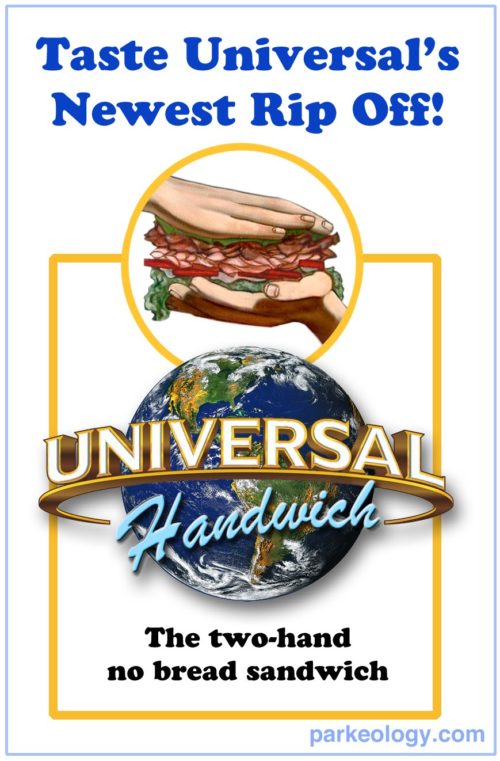 Never to be outdone, Universal was quick to jump on the bandwagon and roll out their own brilliant version of the Handwich. Like many of their efforts, it was not very well thought out.

This amazing, magical and revolutionary breakthrough in culinary convenience was miraculous because unlike archaic sliced bread sandwiches, the Handwich could easily be eaten with your hand… no knife and fork required. Well, OK, normal old sandwiches don’t need those either but the Handwich was better because it was one handed and looked like ice cream… and you know, was all futuristic and stuff. Unlike the primitive wraps we see today or the positively primeval pita sandwiches of the past, Disney’s Handwich would not come unwrapped and drop its precious cargo because the bread was actually baked into a hollow, seamless cone. This feat of modern gastro-science no doubt took thousands of man-hours to perfect and was one of Eisner’s crowning glories. 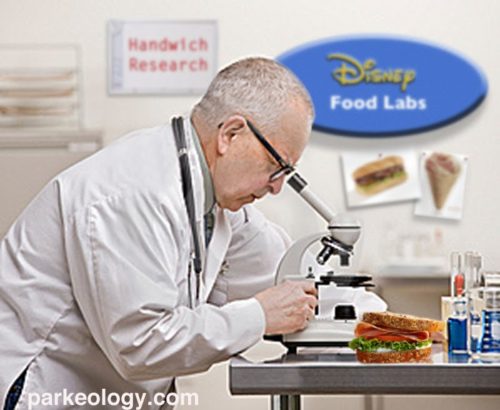 Sandwicheers at the WDI Food Labs burned the midnight oil.

The flavors changed over the years, but we can confirm that in addition to some basics like ham and cheese, turkey, and a roast beef and cheddar melt, they also served Handwiches stuffed with tuna salad, chicken salad, BBQ chicken and a south-of-the-border spicy taco version.  Seasonally (perhaps simply as tests) seafood salad, vegetarian and ambrosia salad options were available loaded into the savory and soft baked cones.

As wonderful as our memories of this fantastic food may be, the fact is that it did not change the world’s dining habits for a reason… frankly it is a silly idea to begin with.  The first several bites would yield nothing but filling, and the last few were nothing but bread.  It was nearly impossible to find the perfect ratio between bread and stuffing, and for all the one handed hoopla, it was actually much sloppier than many boring old normal sandwiches (think about how messy a big ice cream cone can be. Now imagine it being floppy and soaked with piping hot BBQ sauce).  Ironically Disney’s Handwich was often served with a fork sticking out of the top, rendering the whole point moot.  Sandwiches themselves were created to be an easy-to-eat, portable meal solution. The Handwich was as redundant as the adjectives in this article. But sometimes living the high-life is not about what is practical or functional or easy or even logical. It is about trying something fun and new and, in the case of the Handwich, chock full of meat and conical. 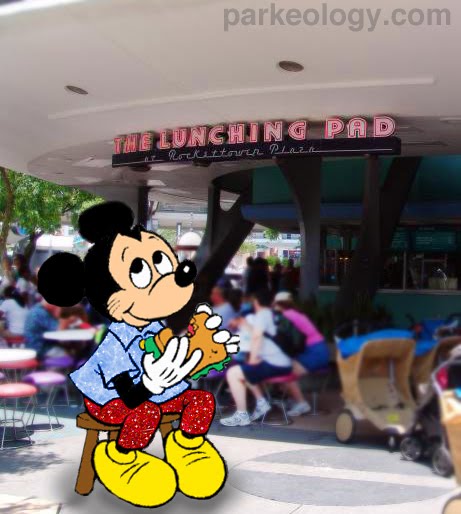 Stupid square, I miss the cone!

The Handwich was introduced circa 1988 and lasted into the mid 1990’s… a short run that has left a lasting impression on many folks.  Witness the countless Handwich fan sites, the many Handwich groups on social media networks or the thousands of names on the “Bring back Disney’s Handwich” online petition.  Well OK, maybe not so much… there is virtually nothing out there on this former masterpiece of the sandwich arts, but people do remember it fondly.  Next time you are in the parks try to spot someone at least 35 to 45 years old who looks like they have been around the theme park world. Approach them and in hushed tones mention the sandwich of the future, evoke the Handwich and watch his or her eyes light up with that spark of remembrance as a smile curls across their face. You’re a member of the club, one of the cool kids, a person who held the future in his hand… and ate it.

The Handwich was available at the Land food court in EPCOT as well as in Tomorrowland and any place fantastic futuristic foods would be served.

But what if you missed the Handwich altogether?  What of the poor souls who have never understood the convenience of eating a savory cone of processed cured meats while plodding through the relentlessly unforgiving Orlando sun and still enjoying an open hand to do with whatever they please?  Well all is not lost.  I am happy to report that Handwich has been resurrected!  This is of course not the Disney original but a new company that has stolen, borrowed the idea and has marketed it as something novel and new. 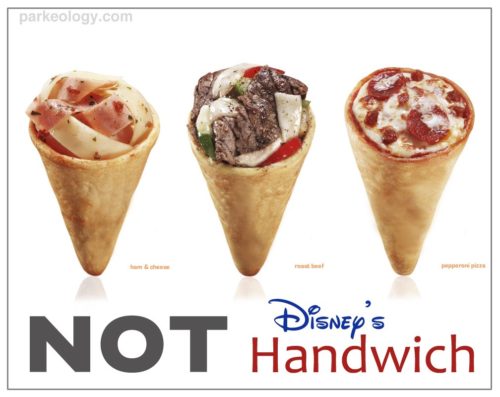 Imitation is the sincerest form of flattery, I guess.

The Crispy Cone is in essence Disney’s Handwich 2.0, go order some, stuff ’em with whatever you like, pack them up and take a trip to Tomorrowland… your journey back in time to the salad days of youth will be complete. The future was once full of flying cars, robot butlers and one-handed sandwiches. It can be again. Let’s give those dreamers a hand.

Back in 2013 Min and Bill’s dockside Diner at Disney’s Hollywood Studios quietly changed their menu and introduced a surprisingly familiar old friend. 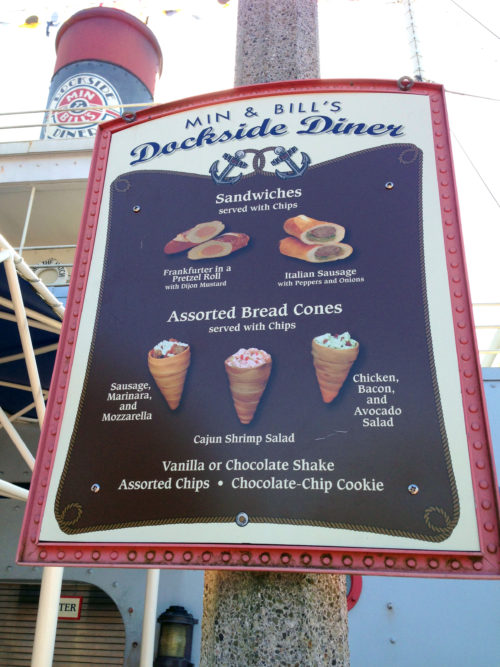 MMMMMMM a delicious cajun shrimp salad served in a soft, impossible to eat bread cone in 100-degree heat, what could possibly go wrong?

It was almost as if Disney was embarrassed of the past (no more Handwich name) and snuck these little beauties out under the cover of darkness. More likely, whoever rolled these out had never even heard of the trailblazing cones of delight that came 25 years before. Alas history does have a way of repeating itself and those who are ignorant of it are doomed to repeat it, for this version failed as well.

The little-cone-that-could tried one last time to win over the hungry masses but was quickly killed off and is nowhere to be found today. However all hope is not lost for our conoidal friend. Perhaps the cone is just futuristic enough to make an appearance at the upcoming World of Avatar? Or maybe, just maybe, it is what folks might have eaten a long time ago in a galaxy far far away?