But this time, I have three legitimate excuses. This annoys me, because I would like to bank two of these excuses for next time, but such is life. Anyway, here they are. First, I was finishing up the first draft of my next book. Great, you are thinking. There is nothing more annoying than some guy on the internet promoting his next book. (Good thing I’m not doing that. However, I will continue to promote my last book. You can buy it here!)

Secondly, we found out that we have been matched for adoption. There will soon be a new little parkeologist scampering around the offices. I figure this kid is bound to hate Disney, and will end up liking Universal or something. (The only thing more annoying than someone promoting their book is someone blabbing about their kids).

But the third excuse, and perhaps of the most interest to you, is that I have invented time travel. 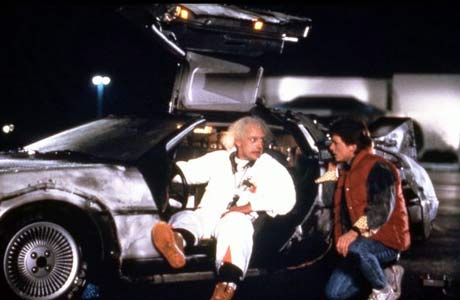 Finding the plutonium to power it… that’s another matter entirely.

You would think this would mean I would have all the time in the world to simply travel back and post interesting things, so this site wouldn’t look so dead. But no, I have been using it for my own amusement.

You see, it all started with a dream I had. Oh no! you say. First self-promotion, then kid stuff, and now he’s about to start yapping about his bizarre dreams! Well, yes. But there’s a payoff.

See, in this dream, I was at Epcot. I was walking through those Leave a Legacy headstones, and it was sunset, and the background music was Tie Me Kangaroo Down by Rolf Harris. I think I was wearing lederhosen, and for some reason I had a rat-tail braid. It was really weird.

But I noticed that the line for Spaceship Earth was almost non-existent. I think this means it was September in my dream. So I got in line, and quickly boarded the attraction. And it had padded seats, which was nice. And you know how Spaceship Earth is all interactive now, with a touchscreen built right into the time machine? Well, it was just like that in my dream. And the first thing you have to do is pick the language you want for the narration.

Now I don’t know how I knew this, but in my dream, I remembered a (non-existent) article I had read on Progress City U.S.A. about how Spaceship Earth has this easter egg built into it. And if you touch the “Chinese” language 3 times on the touchscreen, you can trigger it. 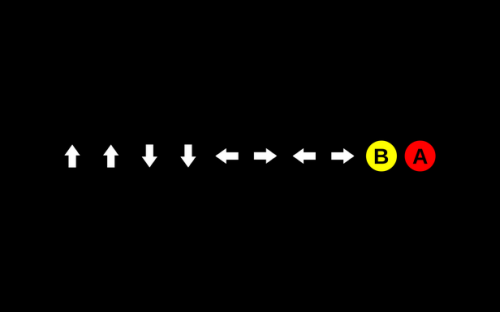 If you enter this code, however, you get 30 FastPasses.

Of course I entered the code, and the screen dissolved, and up popped a new language option:

(Cronkite didn’t actually narrate the attraction until 1986, but there was no fact checking in my dream). You could imagine how delighted I was to ride the attraction with this throwback track. We started going up the lift hill, the Cronkite narration began, and then the ride promptly shutdown for an emergency evac, and it had something to do with spaghetti noodles, and anyway, I woke up.

Now obviously, this is a let-down. How awesome would it be if Imagineering really did build such an easter egg into the attraction? Then the amazing thought struck me: I could actually create this experience for myself.

You see, I happen to have a copy of the Cronkite narration on my iPhone. It’s a recording of the ride, not original audio source, but perfectly legible none the less. I also have the Jeremy Irons narration from 1994 to just a few years ago, when he was replaced by Judy Dench. You can find both of these tracks out there in the ether, if you look for them.

And Spaceship Earth the ride is virtually intact from 1982. Sure, the descent is different now, but most of the ride, the cool parts with the AA figures, are the same. With some careful planning, I thought it might be possible to journey into the past. And last night, I completed two successful trips.

There are a few things a time traveller must pack in order to successfully journey into Epcot’s heyday. First is the aforementioned audio tracks on an iPhone or similar device. Secondly, a good pair of noise cancelling headphones. 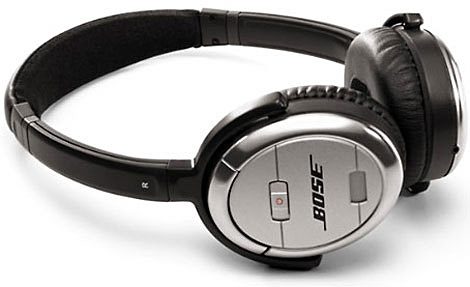 The way I see it, if you’re going to build a time machine into a pair of headphones, why not do it with some style. Besides, the stainless steel construction makes the flux dispersal — LOOK OUT!

When boarding the ride, I suggest having the narration cued up and ready to start as soon as you exit the loading area and begin going up the first hill. With Cronkite, this is usually when the secondary female voice begins talking about AT&T (there used to be a light up sign for that). It’s a good idea to make sure you have the volume loud enough as well. You need to drown out the actual audio.

Along those lines, I recommend choosing Chinese for realz as your language on the touchscreen. If you leave it as English (the default), there’s a chance your ears will keep trying to focus on the Judy Dench narration. Chinese is so different from English, that you can effectively tune it out as white noise.

While the timing seemed to be pretty evenly matched with the Omnimover pace today, there are still a few moments where you realize you’re about 5 or 10 seconds ahead or behind. In that case, practice a little bit with scrubbing on your iPhone, so that you can quickly adjust without losing your spot. When you’re dealing with a 16-min track, it’s hard to scrub just a few seconds in either direction (maybe there’s a better trick for this).

As fate would have it, both my Cronkite and my Irons narrations had unscheduled stops in the track (“Remain seated. Your vehicle may begin moving at any moment.”) Both happened on the descent, so it didn’t really disrupt anything, since the current descent is just a useless flash animation. And because of the timing, I managed to botch the exit on my Cronkite ride-thru, and missed the invitation to explore Communicore. The Irons trip was perfect, as I was invited to explore the “new Global Neighborhood!”

But for the majority of those two trips, I was in awe.

I’m actually more familiar with the Irons narration than the Cronkite version, so I took that trip first. I muddled the beginning, and finally got it in synch at the Caveman scene. After that, there were some grand highlights. The Rome scene, and “Jewish teachers and Islamic scholars” were synched perfectly. The newsboy had his high-pitched “Extra! Extra!” call. And through the magic of the synthesized music, the current “Matrix” tunnel (right before you reach the star field) actually disappeared for me, replaced with those blinky pink and purple lightbars that used to be there.

As I began the descent, I was still in perfect synch. Remember that section where there are vignettes above you using a Pepper’s Ghost effect (a Graduation, a birthday party, etc.)? I actually could look up at that section and hear the audio track for them, even though the vignettes are now covered over with black cloth. And my imagination painted in that last, glittering model of Spaceship Earth, pulling back from you as you approach the unload area. 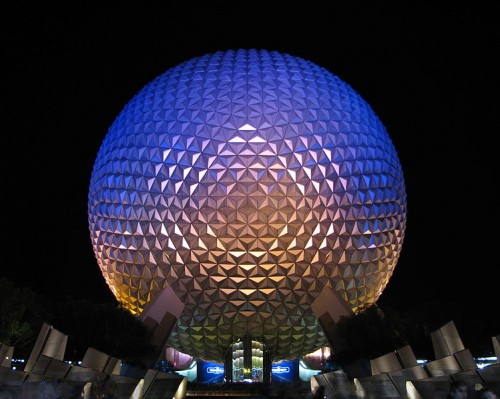 Fortunately, I elected to leave the Wand in the past, where it belongs.

My next trip was with Cronkite, and I was more prepared. This time, I was slightly ahead, so it was beginning the cave narration before I had even reached the Woolly Mammoth movie. I was able to scrub ahead, and get myself on track. My absolute favorite line from the Cronkite track is “Behold, the majesty of the Sistine Ceiling.” And I was not disappointed when I rounded the corner in the renaissance and Cronkite spoke those words into my ears, just as Michelangelo appeared. It sent a chill up my spine.

The descent was fantastic, because I got to listen to Tomorrow’s Child the whole way down. If not for the annoying light pollution from the flash movie, it would have been perfect. Those things are really distracting when you’re not wanting to look at them. You become aware of just how much black cloth there is on the walls. Most of it pretty ugly.

I tried to think of other rides this could work on, but there are very few that have kept the same track and scenes, but changed the audio. It might be interesting to try Stitch’s Great Escape with the Alien Encounter track, but my guess is that none of the effects have the same timing. Buzz Lightyear has the same track from Magic Kingdom opening day, but its scenes wouldn’t match up very well with If You Had Wings or Dreamflight. Imagination chopped out a long section of track, and also added stops and starts. Gran Fiesta Tour might work, but it’s a boat, and the synch could get off very easily.

That leaves Spaceship Earth, a ride that already claims to use time machines. There’s still a third possible trip, the original Vic Perrin narration (a track that has thus far eluded me in my travels, and which I have never even heard — my first trip to Epcot was in ’84, and Spaceship Earth was down for rehab, so my first ride was not until ’86, when Cronkite was in place). If you have access to any of the older audio tracks, I encourage you to give time travel a try. And don’t worry about that asteroid. You’ll be in and out of there before it even breaks the atmosphere.

Trust me. What could go wrong?

29 thoughts on “Spaceship Earth and the Invention of Time Travel”