It all seemed like a joke some months back when Donald Trump (along with Melania, his European trophy wife) took a torturously slow escalator ride down to what certainly must be the most bizarre presidential campaign announcement in history. Backed by approximately a thousand flags and cheered on by a crowd that looked to be straight out of a high school track meet (poster board signs and all) the master of the universe announced his intentions to run for President of the United States. Surely it was all just some sort of surreal exercise in absurdism, a prank for his TV show perhaps? 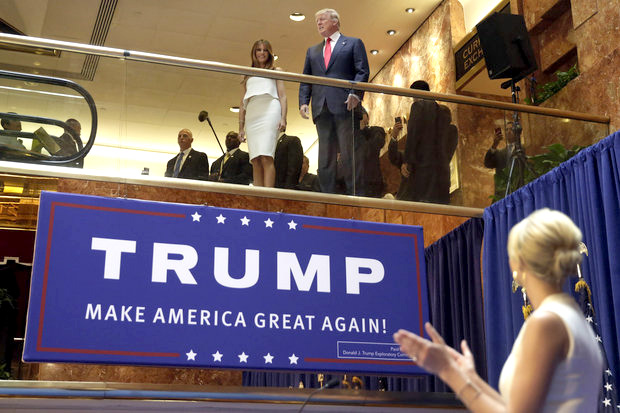 Getting ready for a long ride down a short escalator, Trump surrounded himself by pretty women in white (one his wife, the other his daughter, oddly both roughly the same ages)

Now 42 debates, dozens of twitter feuds, a couple of penis references, and a particularly insane campaign later the joke is over, Donald Trump has emerged as the presumed Republican candidate. Putting all political preferences aside Disney is left in a somewhat difficult position; they operate the Hall of Presidents in the Magic Kingdom, a stirring tribute to democracy featuring a cavalcade of presidential audio animatronic figures. In more recent years the park has not only installed life-like representations of each president to be but has also had him (or now possibly her) record dialogue to incorporate into the show. This takes a level of cooperation that Trump is typically adverse to.

As one might imagine, negotiating with the president on a mutually acceptable set of terms is never easy. Washington, Lincoln and Jefferson are dead, they have no real say. But today’s politicians maintain carefully crafted appearances and demand not only input but also ultimately final approval of their depiction at the Hall of Presidents. The Walt Disney Company does not wish to get on the wrong side of the government (who they share a very productive relationship with) and therefore enter into discussions with each party’s candidate up to a year prior to the actual election. This allows for the terms to be negotiated and in place by the time the eventual winner is sworn in, it also provides Disney a jump start to have the new figure and show elements ready to be installed in a timely manner. 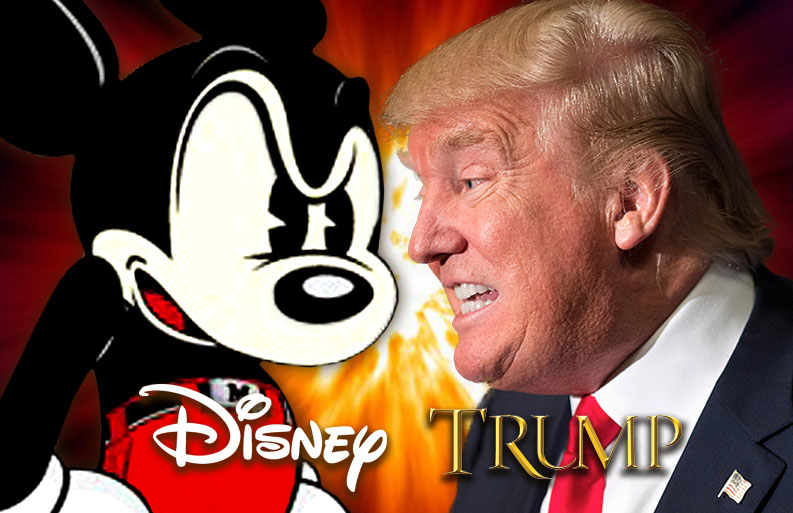 Disney approached Trump about a month ago once it was clear that he was the front-runner and likely representative of the Republican Party. Trump used this discussion with Disney as a showcase of the negotiating skills he has promised to bring to his presidency. Past deals with presidential candidates have tended to be cordial and brief. Generally there is a script presented to the candidate’s advisors, after a review and input from the handlers and council a second draft is presented, often with specific phrases added or removed as to better reflect the individual’s speaking style and message. Normally that is more or less it. Contracts are signed, photographs are taken to help create the likeness and show dialogue is recorded. The presidential candidates have generally been very happy to cooperate with Disney and help spread their particular message of hope and optimism for our country. 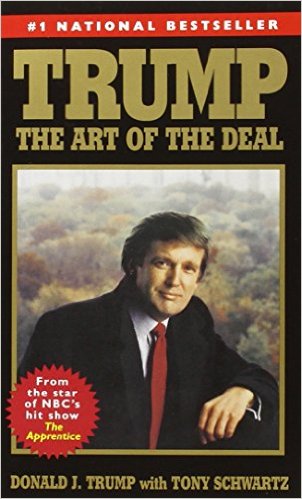 After all, he literally wrote the book on it…

Trump has proven to be much more challenging. He considers himself a master negotiator and has actually hung much of his campaign on the idea that he would “win” negotiations with companies and countries alike. Trump was never going to simply agree to Disney’s boilerplate terms but rather used this as a showcase of his expertise at getting what he wants on his terms. By all accounts it was not easy but after an intense month-long back and forth between the lawyers of Disney and Trump an agreement has been struck.

Trump will lend his likeness and voice to the new Presidential show however his tough negotiating has led to several compromises on the part of the Walt Disney Company; these are in many ways unprecedented in scope. 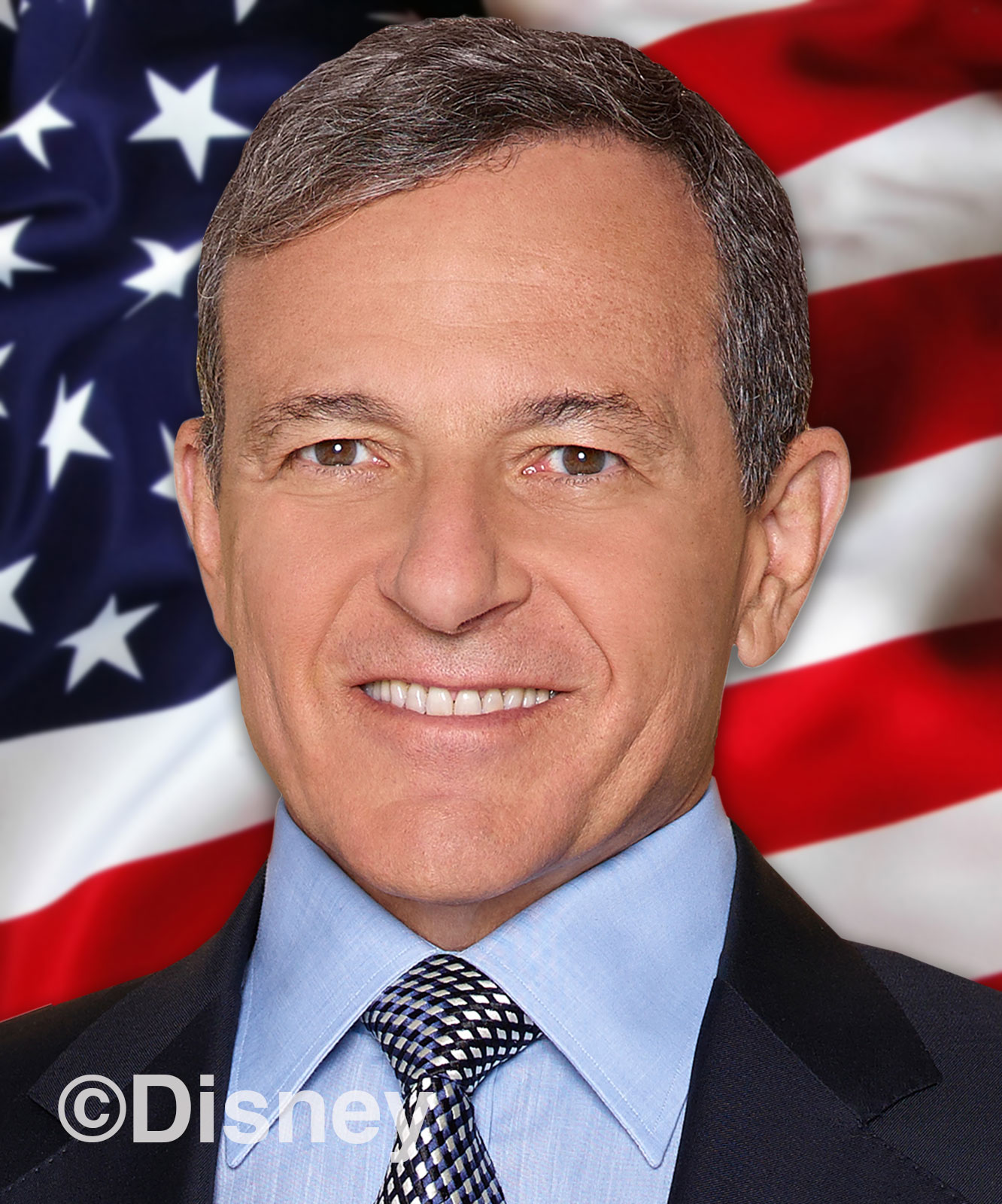 Chairman and CEO Bob Iger was personally involved with the Trump negotiations.

“Today the Walt Disney Company is proud to announce that it has come to terms with Mr. Donald J. Trump and is pleased to announce a mutual agreement that will ensure Mr. Trump’s participation at the Walt Disney World Resort as well as his involvement with the beloved classic attraction “The Hall of Presidents.”

As a great corporate leader and respected businessman Donald has a proven track record of excellence. He has built some of the world’s most iconic buildings and resorts and the Walt Disney Company is proud to partner with him and his team as we forge an exciting future that is traditionally Disney while also majestically Trump.” 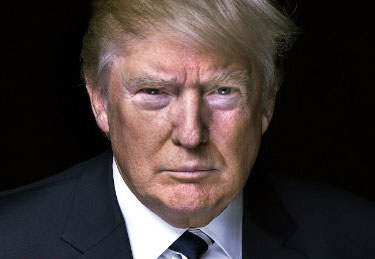 By contrast and in his signature unscripted off the cuff style Trump added: 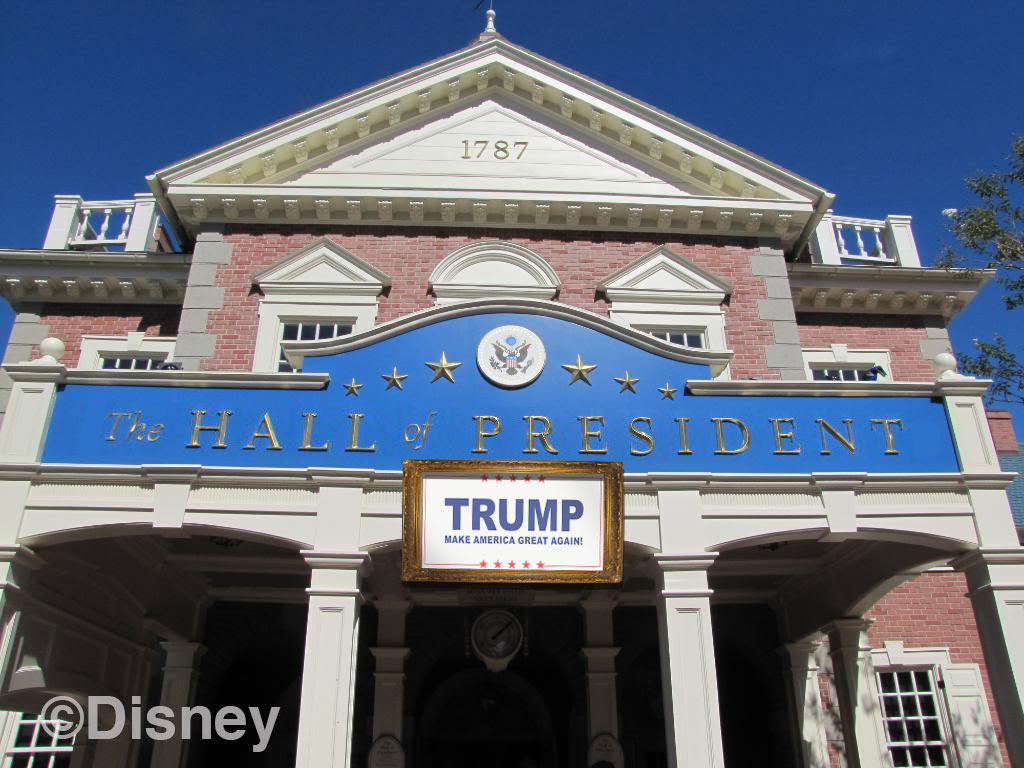 Changes will be both big and small

The details for the upcoming changes to the Hall of Presidents and the Walt Disney World resort have been released some highlights are as follows: 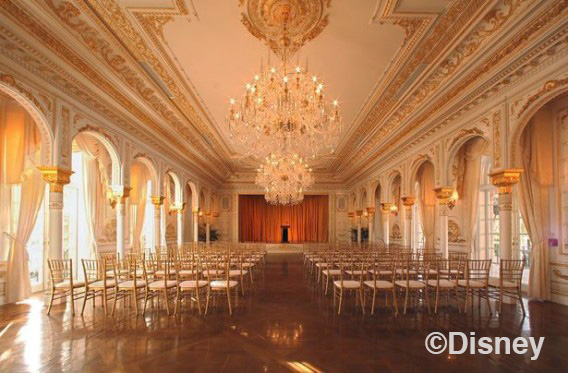 Concept art gives a glimpse of the lavish Trump style soon to added to the Hall of Presidents. 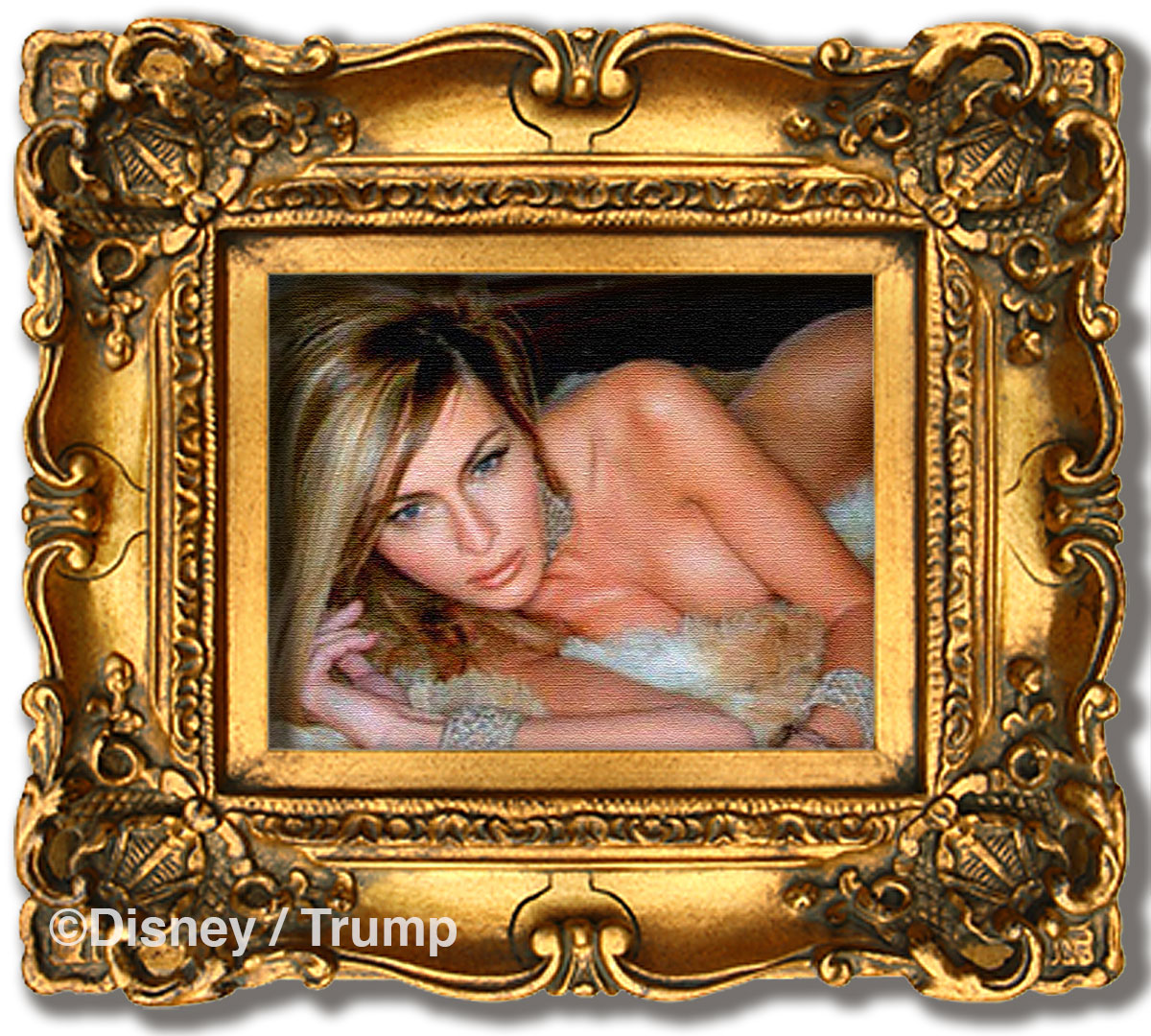 The theme parks will soon receive a dose of “class”: Trump style. 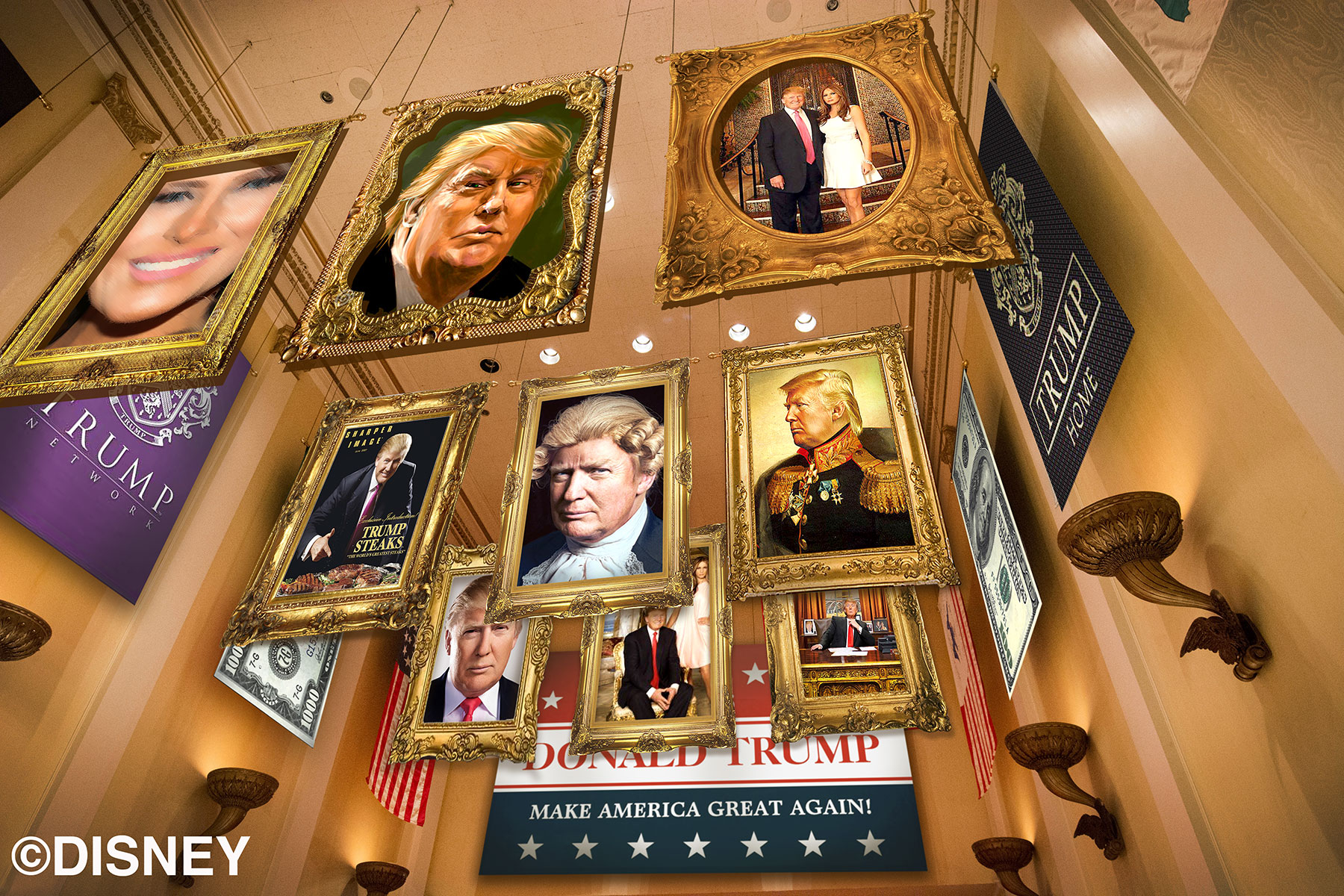 Disney has provided the above concept art depicting the updated Hall of Flags now to be known as the “Trump Portrait Gallery”.

Outside of the parks Disney has also agreed to allow Trump to take over management of its hotels and will be permitted to construct a new 100 plus story tall “mega-tower” hotel and casino on the resort’s property. The cleverly named “Trump World Tower at Walt Disney World Resort” will be erected near the Magic Kingdom and in typical Trump fashion is designed to dwarf all competition. 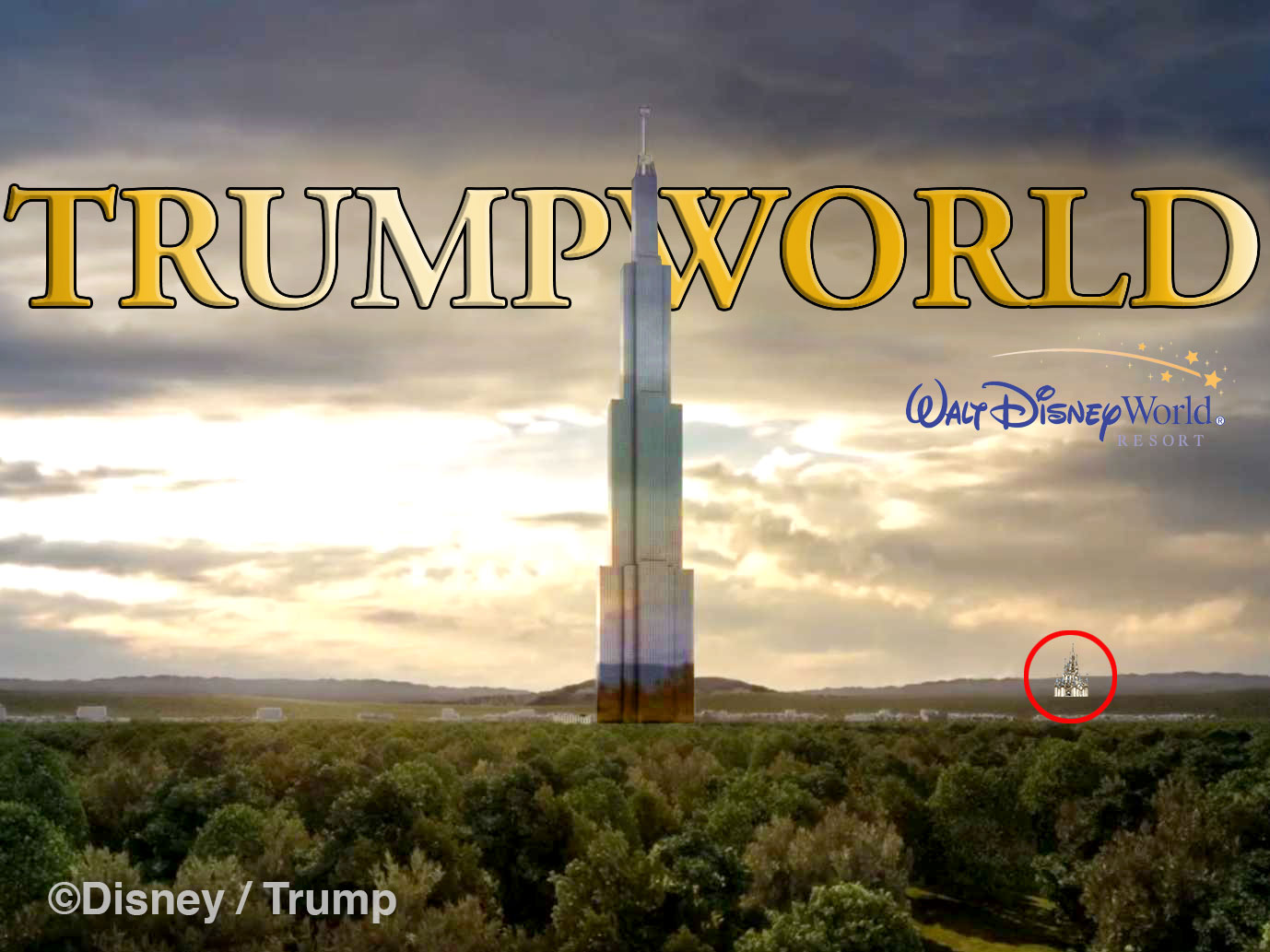 We have circled Cinderella’s Castle at the Magic Kingdom, it gives a sense of scale. The Trump World mega-tower will certainly be the tallest building in Florida but may end up the tallest in the world.

All monorails will now be “Monorail Gold”. Trump is insistent than only “The best” be associated with properties that carry his name. This is a point that Disney is concerned with and is trying to at least negotiate other precious materials such as “Monorail Platinum”, “Monorail Diamond” and “Monorail Palladium” in order to avoid confusion. Trump however is demanding that they are all gold and furthermore that they are plated with 100% genuine 24k gold.

Additionally some sort of “Beautiful wall” will be erected around the Mexico Pavilion at Epcot. Finally and perhaps most controversially the Morocco pavilion within the World Showcase will be closed and replaced with an “All American tribute to making America great again.” No further details were released but Trump was quoted as saying “Some of my dearest friends are Moroccans OK? I love Moroccans. Some Moroccans maybe I don’t love so much, in fact many Moroccans, like a lot of them are maybe not so great, but some I like and trust me, they will LOVE this!” 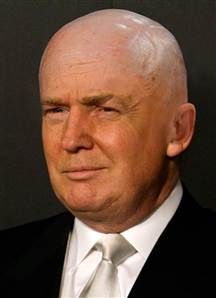 Walt Disney Imagineering already has a life-like Trump figure created and ready to go, however the “hair” has proven to be quite tricky.

As an interesting side note it has been leaked that Walt Disney Imagineering is having a very difficult time reproducing the signature style of Trump’s hair. It seems that despite testing all kinds of materials including nylon, polyester, spun asbestos and even straight up straw (which was deemed to be too luxurious looking) nothing has properly captured the otherworldly synthetic look of his “hair”.

WDI had been working on a fiber optics solution but they are currently pursuing projection-mapping technology in partnership with the special effects masters at Industrial Light and Magic. This is a still developing story and hopefully it can be worked out before installation.