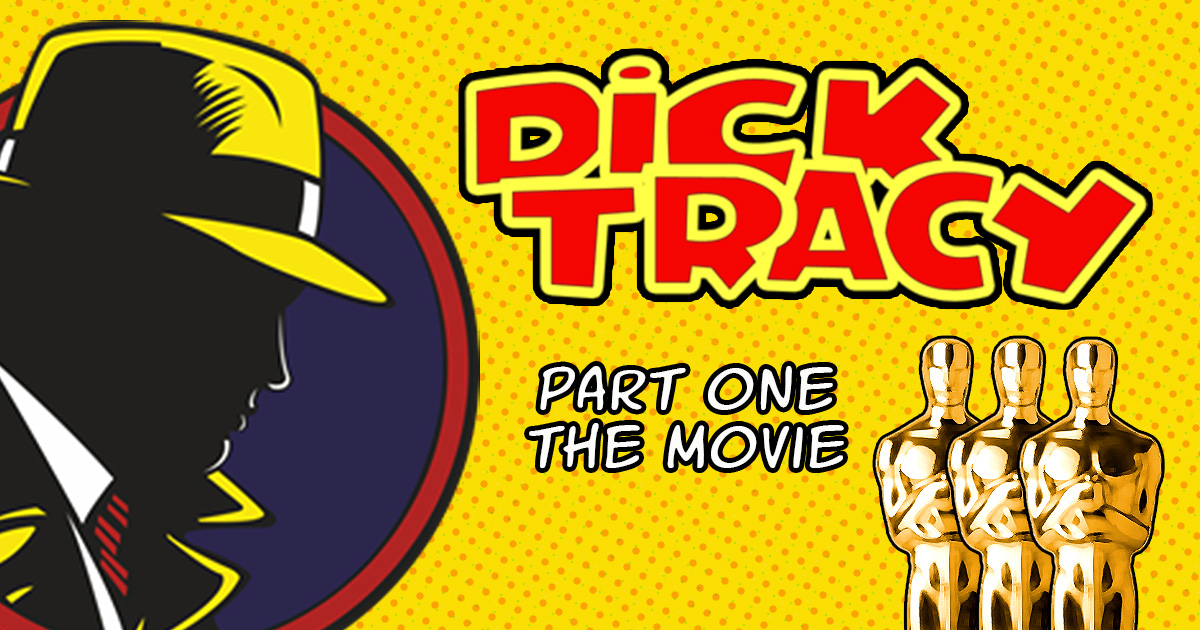 Before Dick Tracy there was a Batman

Batman was the top-grossing movie of the 1989 besting the latest chapter in the Indiana Jones saga. The following year, in search of the next big thing, the Walt Disney Company copied every aspect of Batman and took a gamble on Dick Tracy; a 60-year-old gumshoe from the funny pages.

It seemed to have it all: big stars, auteur director, lavish production, musical masters, characters sourced from comics, and a massive marketing push. It was a can’t miss proposition.

Dick Tracy is a litmus test; if you remember the hysteria surrounding it you have earned Disney fandom cred. Tracy was the movie meant to become Disney’s signature property, a blockbuster franchise that would propel Disney into the big leagues. It is one of the most ambitious yet weirdest major motion pictures ever made and that’s precisely what we love about it!

Today Disney owns all the movie franchises. Disney controls so many that they are difficult to list: The Marvel Cinematic Universe, Star Wars, Pixar, Indiana Jones, Pirates of the Caribbean, Avatar, Disney Feature Animation, all the Fox movies, the list is endless. However, as crazy as it seems now, there was a time when Disney had none at all.

In the 1970s and 1980s studios started to create sequels to their biggest hits, these were the primordial versions of the Marvel Cinematic Universe. Film series existed (including James Bond) but as a general rule movies were either stand-alone affairs or part of lower-budget serials. However, by the late 1980s, every studio had its own high-profile franchise. Paramount had Star Trek and Indiana Jones, Fox had Star Wars and Die Hard, Universal had Back to the Future and Jaws, Warner Brothers had Superman and now Batman and Disney had… well Disney had squat.

Disney’s top executives Michael Eisner and Jeffery Katzenberg had done an admirable job reviving the company by producing modest films. These movies featured inexpensive fading stars seeking a comeback or up-and-coming actors in need of a break. Commonly referred to as “singles and doubles” they were low-risk endeavors. Movies such as Splash, Good Morning Vietnam, Down and Out in Beverly Hills, and Adventures in Babysitting were well-reviewed and successful but not home runs.

Disney’s animated movies of the time were still in a lull; this was prior to the animation renaissance. It was so dire that when Disney was competing with Universal to create studio parks the head of Universal quipped: “What are they going to do, build a Three Men and a Baby ride?” he was not wrong. Disney had to license films from MGM to have recognizable content for its own park. The closest thing to a successful franchise Disney had were the Ernest movies.

In 1931 Chester Gould created newspaper comic strip character Dick Tracy. “Dick” was a popular synonym for a detective; the comic followed Tracy’s fight against organized crime mirroring the real-life events of Al Capone. Gould created a rogue’s gallery of criminals for Tracy to battle; each more grotesque than the next. It was a simple straightforward tale of good guys versus bad guys.

Dick Tracy became a hit in the 1930s and 1940s spinning off of radio shows, books, and movies however its popularity eventually waned. By 1985 the film rights to Dick Tracy lapsed and Hollywood icon Warren Beatty bought them. It was not a studio or a media company but rather a single guy who purchased the rights to this once-formidable franchise. In fact, Beatty still holds the rights to Dick Tracy to this day, remember that.

Beatty, a multitalented actor, and filmmaker who had won the Oscar for best direction in 1981 (with 14 total nominations to date) was looking to make his next film. He had a reputation as a perfectionist and was a notorious lothario with a large “black book” and an ego to match. Disney believed that it was ready to move to the next level in Hollywood and wanted to work with a high-profile star like Beatty.

A perfect storm formed as Disney needed a franchise, Beatty needed to recoup his investment in Tracy, comic-based movies were fashionable and Eisner was enamored with A-list talent. Disney green-lit a big-budget movie adaptation of Dick Tracy and just like that found itself in the movie star business.

Set in 1938, the Dick Tracy movie tells the story of the crime boss Big Boy Caprice squaring off against Tracy and the authorities. Along the way fetching chanteuse Breathless Mahoney seduces Tracy trapping him between herself and his longtime girl Tess. There is a bit of a twist at the end but all in all, it is a standard pulp crime drama similar to those actually produced in the 1930s.

A major Tracy film had been floating around Hollywood for nearly a decade. Originally attached to Steven Speilberg the project then went through directors John Landis, Walter Hill, and even Martin Scorsese. For various reasons, none of these filmmakers worked out and Beatty eventually agreed to helm the project; he would produce and direct as well as star.

Beatty was a demanding artist; he had the clout to make what he wanted and he answered to no one. Eisner agreed to give Beatty full artistic control; Disney was establishing a pattern of doing so. Frances Ford Coppola and George Lucas controlled the production of EPCOT’s Captain-Eo (cute story here) and even John Landis put his stamp on an odd Disneyland TV special. Disney however had never given up control of a movie of this scale.

Bringing in the big guns

Disney spared no expense casting the film. Beatty tapped iconic (albeit older) stars such as Oscar winner Al Pacino, two-time Oscar winner Dustin Hoffman, and Disney legend Dick Van Dyke among a long list of other known stars. These actors were then rendered nearly unrecognizable with their famous faces buried under pounds of prosthetics. Beatty cast at least one person under 50, his then real-life girlfriend Madonna. Yes, that Madonna, the singer. She was a cultural marvel at the height of her career and, despite several failed attempts, she was keen on becoming an actor.

Behind the camera, Beatty brought in legendary cinematographer Vittorio Storaro who had won three Oscars including one for Apocalypse Now. Danny Elfman, fresh off Batman, wrote the score. Perhaps most impressively Beatty convinced one of the most important figures in musical theater history, Stephen Sondheim, to write several original songs for Madonna to perform throughout the film.

Staying true to the comics

After copious research Storaro and Beatty stuck to Tracy’s origins limiting the palette of the film to the same seven colors used in the original newspaper comic. Each bold color represents a different character or trait. Yellow for example represents Tracy, as it is a bright beacon of hope. Violet is the darkest color and therefore represents the worst criminals or crimes. Storaro even had cinematic lighting company Rosco design custom Dick Tracy-specific gels. The film is clever in revealing plot clues and character traits through its use of color alone.

Storaro chose to keep the camera static; it barely moves. Each shot is a locked-down composition mimicking a comic strip panel. The world of Dick Tracy intentionally looked artificial and stylized (a ´la Tim Burton) employing obvious matte paintings and garishly colored costumes. The results were striking. One can randomly pull any single frame from this movie and find a beautifully lit and composed image.

Then there was the makeup. Chester Gould designed over-the-top criminals with autological names. Prune Face had a wrinkled prune face. Flattop had a flat-topped head. Little Face had an absurdly little face. The movie thugs were clones of their printed counterparts. Technically the makeup was stellar but it was also distracting, hiding the stars and even limiting the performances of the actors. Tellingly Beatty (and his ego) went sans makeup despite looking nothing like the square-jawed Tracy of the comics.

As undeniably talented as this line-up was warning signs were on the wall: an egotistical auteur given control over a mammoth musical epic, starring aging actors hidden under ghoulish makeup portraying characters based on a largely forgotten property. Add in a stubborn visionary cinematographer, an enigmatic Broadway legend, and a pop diva with a spotty acting past; what could possibly go wrong?

On the set, Beatty insisted on perfection in every single detail. Storaro labored over every shot making sure the compositions and primary colors stayed true the source material. Beatty shot dozens of takes for even the smallest transitional scenes; they quickly fell behind schedule. Predictably Dick Tracy spun wildly over budget ballooning to become perhaps the most expensive movie ever made at the time. Disney, believing Tracy to be a surefire sensation, came up with the extra money. For comparison, Dick Tracy ended up costing nearly twice that of Batman.

Disney heavily marketed the movie, spending as much on promotion as they did on the production itself. Television commercials and corporate tie-ins were omnipresent, merchandise of all kinds filled shelves including costly high-end yellow trench coats aimed at adults and versions of Tracy’s famed radio watch. Madonna released a Dick Tracy album, notably the double-platinum hit “Vogue” was on it. Even the movie’s release was unique. Disney sold t-shirts that acted as movie tickets; patrons had their shirts rubber-stamped at theaters before being admitted; of course, we still have ours!

There were plans for more movies, television shows, consumer goods, and theme park attractions. Disney expected Tracy to become an evergreen property for generations to come.

The public was indifferent

Dick Tracy was finally released on June 15th, 1990. It was met with mixed reviews, middling public response, and managed to barely break even. The film was neither a flop nor a hit but fell far short of the hype. Tracy earned seven Oscar nominations and won three (original song, makeup, and art direction). Then it just fizzled and quietly faded away; much ado about nothing.

Disney lost interest in the character and cancelled all future plans including sequels and park attractions. It is impossible to overstate how high the expectations were for Dick Tracy or how much time, money, and effort Disney spent trying to make it work. Disney put all of its corporate might behind the film for months only to see it met with virtual indifference. Today Dick Tracy is remembered for its inventive visual style if it is remembered at all. The ordeal also caused Disney to revise how it made movies giving them an excuse to lower budgets taking control back from filmmakers.

Regardless, the film is unlike anything seen before. Individually the elements work; the cinematography is amazing, the makeup is brilliant, the acting is solid and the music is unmatched but it is also less than the sum of its parts. Beatty failed to make the characters compelling enough for audiences to care about, or maybe the character’s time simply had passed.

Previously we said Dick Tracy copied Batman but that is simplistic and unfair. While undeniably influenced by that film, Dick Tracy surely is an ambitious attempt at something unique. Tracy is incredibly faithful to the source material and was crafted with great care. Perhaps the movie relies too much on visual spectacle, but the elements nearly coalesce to create magic. It is a charmingly weird movie that is almost great and certainly has merit. In fact, if made today perhaps would be the hit Disney was hoping for.

But this is not the end of the Tracy story. Huge plans were in the works for Dick Tracy theme park attractions on both coasts, and even if you remember the movie you may not be aware that Warren Beatty produced a sequel to Dick Tracy! Next week we will wrap up the Dick Tracy saga, delve into the park expansions and introduce the secret sequel that you have never seen!