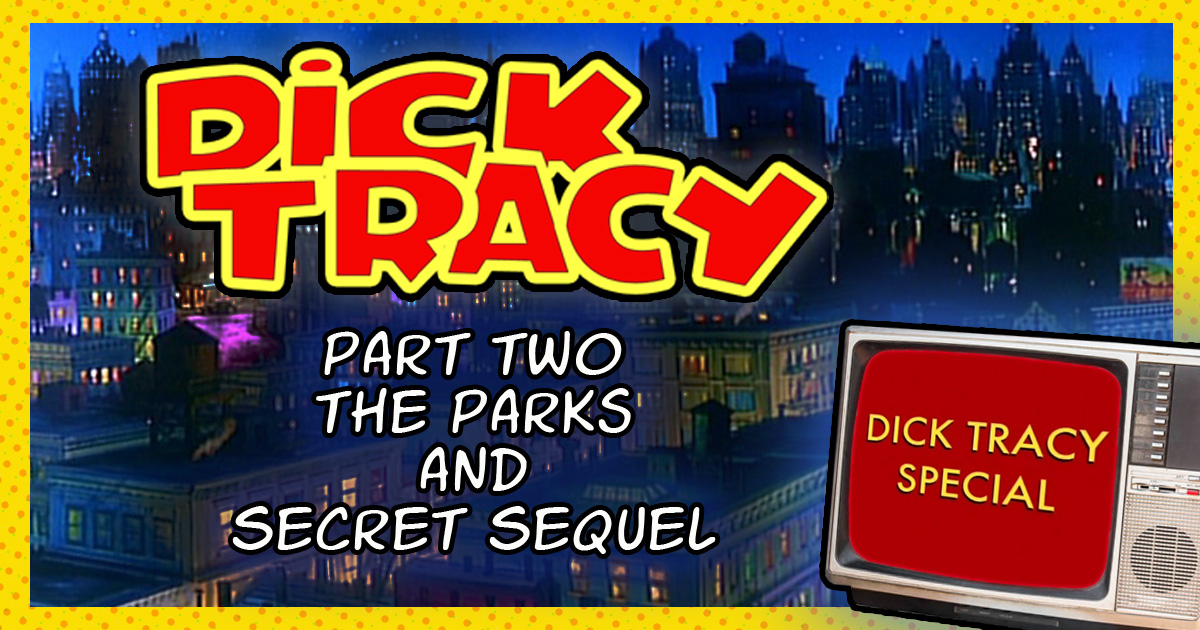 The movie fizzled, now what?

Read About the Movie in Part One Here

By the fall of 1990, it was clear that Dick Tracy was a dud. After the film’s tepid reception Disney removed the character from the parks; leaving behind only hints as to what could have been. Tracy-related shows, shops, and attractions were quietly shuttered. The loss of the previously announced Dick Tracy expansions (and flagship ride) were the biggest disappointments.

Disneyland and Disney-MGM Studios had plans for major expansions to house Dick Tracy; “Hollywood Land” in Disneyland and a Chicago addition for Disney-MGM Studios. Each Dick Tracy area was set in the 1930s and featured cobblestone streets, crumbling exposed brick walls, and a variety of unique shops and eateries. Guests would first explore a bustling commercial neighborhood before eventually making their way to a grimy wharf and warehouse district. Here, fishmongers loaded up trucks while ominous smokestacks would have loomed overhead. Guests now found themselves in front of the Southside Warehouse, home to Dick Tracy’s Crime-Stoppers, the star attraction.

“Guests will literally get ‘into the act’ in this new high-tech action-adventure featuring the very latest in Audio-Animatronics, simulation, sound, and special effects. Guest will join America’s favorite comic-strip detective in a high-speed chase with his gangster adversaries.”

The Crime-Stoppers ride was to be big, brash, and ambitious, not unlike the movie itself. The queue would have wound through labyrinthine depths of interconnected warehouses. Guests ventured past stacks of wooden crates under vast trussed ceilings.

Visitors caught glimpses of movie locations along the way, including the infamous “bath” scene where Lips Manlis met his demise. Eventually, guests arrived at a back alley loading dock where a vintage roadster rumbled into view beckoning them to board.

Now armed with realistic Tommy guns, guests Joined detective Tracy in pursuit of justice. The classic automobiles set off into the night cruising through massive cityscapes bathed in deep jewel tones. The motorcars forged ahead through a series of intricately detailed urban scenes, roaring down back alleys and ducking under elevated train tracks. Guest’s vehicles accelerated in pursuit of the crooks; careening around corners, sometimes even feeling as though they were tipped on only two wheels.

Audio-animatronic hoodlums hid in doorways and behind dumpsters poised to attack. Other reprobates maneuvered cars alongside riders peppering them with gunfire. Passengers fired back taking aim at Flattop and his cohorts. A thrilling climactic encounter with Big Boy Caprice led to an explosive finale (using actual flames). Caprice escaped but not before Tracy and his newly appointed “deputies” saved the day.

The ride was to feature Disney’s Enhanced Motion Vehicles or EMV. We know the EMV from the Indiana Jones and Dinosaur rides at Disneyland and Animal Kingdom respectively, Crime-Stoppers would have been their first use ever. The EMV’s motion platform added thrills and made sure that every bump and pothole was felt by riders.

Crime-Stoppers also introduced the idea of turning a ride into a rolling shooting gallery. Buzz Lightyear Space Ranger Spin employed the concept years later but Tracy would have introduced it. Passengers shot at both animatronic crooks as well as animated props. Imagine combining the atmosphere of the Great Movie Ride’s gangster scene, Indy’s rollicking ride vehicles, the interactive elements of Buzz Lightyear, and the scale of Pirates of the Caribbean; It promised to be ground-breaking.

More Tracy in the parks

Some Tracy-themed additions actually did appear in the parks.

At the time Disney-MGM Studios featured a 2 hour-long studio tour, part walking, and part via motorized tram. The tour showcased Dick Tracy props, including automobiles used in the movie, and also the cast’s wardrobe. Madonna’s sexy sequined dress always elicited comments as to just how tiny she must be.

Guests visited a brownstone neighborhood, part of the New York City set only accessible via tram, during the motorized portion of the tour. Guides paused in front of brightly painted facades as live actors confronted the riders. After some wisecracking, the bad guys threatened to “fill them full of lead” before the police arrived. A shoot-out ensued and the trams escaped. This area is now part of Galaxy’s Edge.

Disney-MGM Studios also boasted walk-around Dick Tracy characters, photo-ops, and Tracy-themed shops. Even Pleasure Island converted a store to be dedicated to Tracy. Disney made a massive but ultimately futile push to get the public to embrace the film.

A live musical show titled “Dick Tracy Starring in Diamond Double Cross” appeared at both the Theater of the Stars in Disney-MGM Studios and at Videopolis in Disneyland. The show ran for less than a year.

The show’s creators had not seen the finished film as Michael Eisner demanded the performance open concurrently with the movie. The plot, most of the music, and some of the characters were new, having no connection to the theatrical release.

The presentation was a typical, if slightly more ambitious, theme park spectacle. The plot involves the theft of a cantaloupe-sized diamond but no one cared about that. People showed up for the singing and dancing and there was plenty of both to go around. The production was notable for its use of a freakish mask-makeup hybrid on Big Boy and his goons. The biggest laugh of the show comes with an inside joke aimed at Madonna calling her character a “Material Girl”. The show also features a surprising moment when a very realistic handgun is held at a character’s head (ah the good old days).

Dick Tracy is still in the parks today, sort of

Disney California Adventure built a watered-down version of Hollywood Land. It lacks the original’s Tracy-themed areas but did maintain much of the general design and some of the period-specific settings.

The city section of the American Waterfront found at Tokyo DisneySea is much more interesting. The proposed Dick Tracy area from Disney-MGM Studios essentially found a home here. Chicago is swapped for New York and the colors are toned down but visitors to Tokyo DisneySea get a real sense of what the Tracy addition promised to offer.

This brings us to the weirdest part of our story: Dick Tracy has a secret sequel.

Remember in part one when we said Warren Beatty owns the rights to Dick Tracy? The law requires rights owners to use their intellectual property or else risk having it revert back to a previous owner or even to fall into the public domain.

In 2008 The Tribune Company (former owners of Tracy’s film rights) argued that Beatty was not performing his duties in maintaining the rights to Dick Tracy. They wanted them back. Therefore Beatty produced a Dick Tracy sequel creatively titled “Dick Tracy Special”. The special aired only one time in 2010 on the Turner Classic Movies network (because wow, was this a classic).

Beatty reprises his role as Dick Tracy. He also discusses Warren Beatty’s portrayal of Dick Tracy, in the third person, while in character as Tracy, got it? Beatty also wrote, directed, and produced this strangely meta follow-up to his 1990 film.

Filming took place on location at the Disney Studios lot in Burbank; the studio portion was curiously shot at Walt Disney Imagineering in Glendale. The special largely consists of film historian Leonard Maltin interviewing Beatty while seated at a wooded table. The set consists of a darkened studio and a solid black background. Imagining a more basic or mundane setting is difficult. So, of course, Beatty hired three-time Academy Award-winning cinematographer Emmanuel Lubezki to shoot it! Lubezki has won Oscars for Gravity, Birdman, and The Revenant, none of his sweeping command of the cinematic arts is on display here. It is absolutely absurd to hire an A-list artist of Lubezki’s caliber for this particular project, but that is how Beatty rolls.

Wendi McLendon-Covey (star of “The Goldbergs”) and Mindy Sterling (who you will recognize from the Austin Powers movies) were cast as studio employees. These characters are amorously smitten with Beatty, swooning over him despite being decades his junior; this feels uncomfortable, out of place, and speaks to Beatty’s infamous ego.

The show plods through the history of the character for half an hour before abruptly ending, almost as if Beatty realized he had met his contractual obligations. Beatty won the lawsuits, in large part because of this production, and still asserts that he plans to produce a proper Dick Tracy theatrical sequel.  You can (and should) watch this nutty Disney footnote in its entirety here:

Disney has the franchise movie thing figured out, they don’t need to slum it with Dick Tracy. They had high expectations yet none of their grand plans came to fruition; Dick Tracy was Disney’s next great thing that never was. The film is not currently on Disney+ and is only available to rent on select streaming services. It is worth seeking out if only to understand an important and now mostly lost piece of Disney’s history.