In our last installment we took a look at the bizarre journey parts of the Horizon’s show scenes took as they traveled from Orlando to Paris only to become in essence garbage.

I had mentioned that in the video we could see another piece of Disney history rotting away in the “bone-yard” of Disney Studios Paris, did you figure it out?
Worse yet this particular piece of Disney park history could be in use today in any number of locations and costs mega bucks.  Take a look at the video:

Did you notice that after the two Horizon vehicles we see some bits and pieces of what look like Dinosaur puppets?  These were simple mechanical animatronics used in the TV version of the immensely popular Dinotopia books. Hallmark entertainment produced this mini series to run on ABC in 2002. 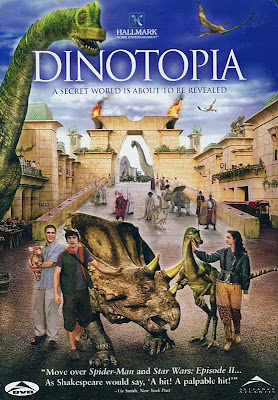 Dinos are our friends… until they kill you for sport.
The series failed to catch on and only 5 of the original 13 episodes aired on ABC (the complete series was aired in Europe and available in the U.S. on DVD as well).  So here we have an example of actual props that were actually used in a production that actually aired.  The fact that it was more popular in Europe and was filmed in Europe (though nowhere near the Studios theme park) made the Paris setting even more fitting.  So what am I talking about then? Take a closer look.
That last dino seems a little different than the others doesn’t he?  Instead of just having a simple tubular metal frame he seems more complicated, full of servos and motors, just more advanced overall.  The reason for this is that this particular dino was never used in Dinotopia or any other television or movie project.  No, this dino came straight from Disney’s Animal Kingdom and is in fact a full-scale audio-animatronic!
Lets jump back to 1998 and the opening of Animal Kingdom, as we have discussed before the park was very different than the other parks at Walt Disney World.  It had a slower pace, fewer traditional rides and asked guests to be active participants in exploring the environment.  People did not fully understand this and they flocked to the rides that were present at opening, one of which was the Discovery River Boats. 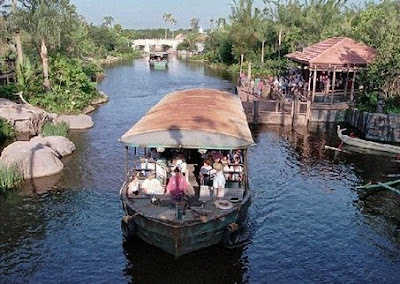 The Discovery River Boats are long gone, but you can still see a key element of the show if you have a plane ticket to Paris and some imagination.
We will talk more about the Discovery River boats in a future Parkeology article but suffice it to say that this little boat ride, really meant more as transportation from one side of the park to the other, could not handle the crowds.  Guests became angry after waiting in long lines to see this simple cruise.  Disney felt the need to react and after several attempts at re-booting the boats quickly shut them down completely.
While the ride may have been a quiet one there was one notable exception; as guests passed by the Dinoland section of the park they were treated to a view of this particular Iguanodon splashing and playing in the river.  He had a nice range of motion as he reared back and his arms swayed in the water as if he were trying to splash our boat. 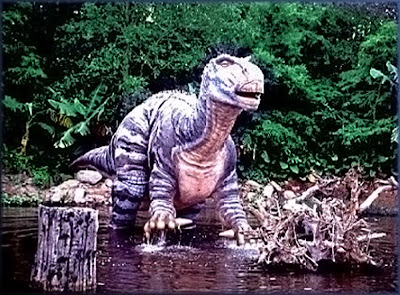 What a cool dino figure, I bet he costs a fortune and Disney pampers him night and day.
What’s more is that he was a real part of the story of the land. This dino was not just a random creature playing in the water; he represented the very dinosaur riders on the big Countdown to Extinction attraction brought back with them to the Dino Institute.  In a brilliant stroke of themeing the Imagineers created a story where this dino was real… we just brought him back with our Time Rover so now where does he live?  He lives right here by the Rivers of Animal Kingdom… or maybe as a rotting hulk in Paris. 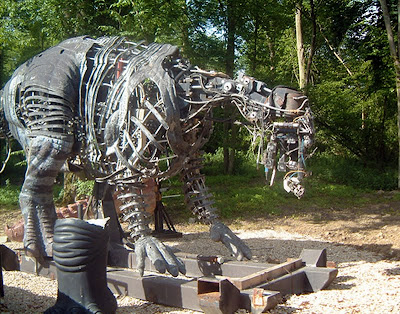 Um….. maybe not so much with the pampering after all.
Couldn’t Disney find something better to do with this costly figure?  How about setting him up in a little holding paddock outside the exit of the ride as if that was his new home?  How about creating some dino tracks in the pavement leading from the Dino Institute down to the river? After pushing through some bushes you could spot our new found friend hanging out on the other side of the river playing in the water. How about installing him as an additional figure on the actual Countdown to Extinction ride (now called Dinosaur)?  Heck, even selling it to some local park and recouping some cash would make more sense that stripping him of his skin and shipping him off to waste away as a mislabeled prop in a far away land.
I wonder how much money Disney spent designing and building this only to have it in use a little over a year before being dumped as garbage? In an era when Disney does not seem to like to build expensive audio-animatronics any more how much does it kill you that a great one has been turned to junk?
Finally we will continue with our Animal Kingdom video series… here is the complete Dinosaur attraction and pre-show.  We shot this in night-vision and had some fun, check it out.

4 thoughts on “Where great rides go to die PART 2.”