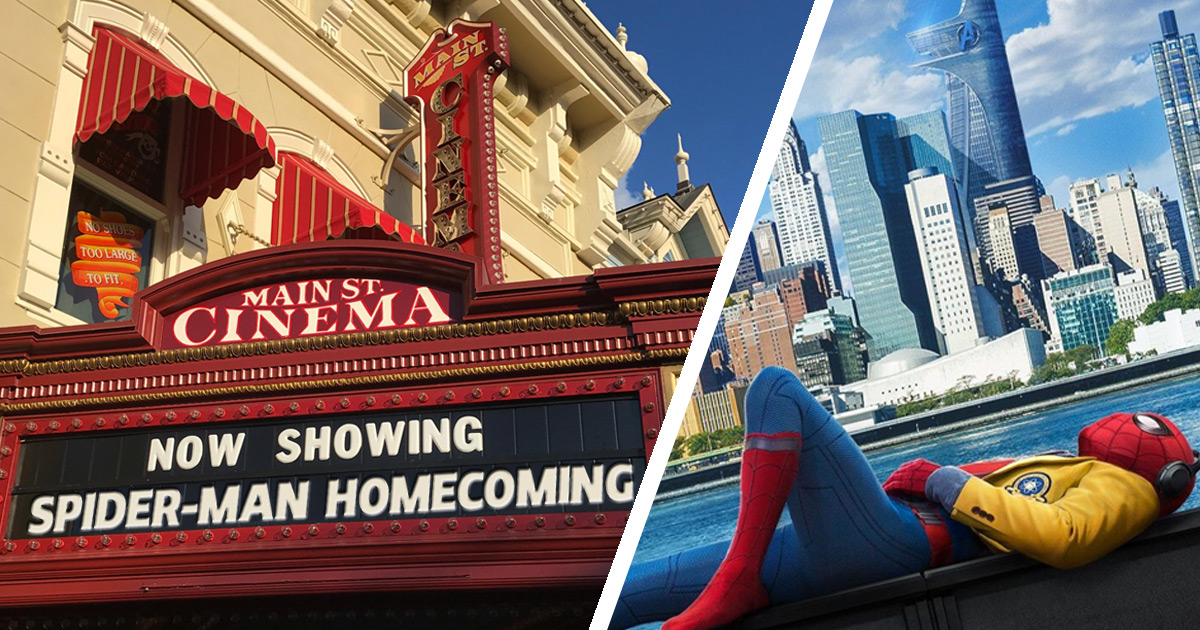 Spider-Man Homecoming opened this weekend. You heard it here first. If you spread the word, maybe this little indie can recoup its cost.

There’s a lot of crossover between movies and theme parks. Disneyland was built by movie-makers. It uses movie tricks to tell movie stories. It even sells overpriced popcorn.

So maybe there’s room to bring some of that movie obsession into Parkeology.

I know there are a million movie review sites out there, so I don’t want to waste everyone’s time with yet another critical analysis. It’s much more fun to waste it in other ways.

As I dive into what may become a regular feature on Parkeology, I’d like to think about Spider-Man Homecoming the way a park fan might. Since movies and theme parks both cost the same hourly rate as a corporate lawyer, we might as well look at them through the same lens.

Disneyland attractions have different moods and themes, first conveyed by the posters in the entry tunnel. The poster for Jungle Cruise is bold and adventurous. Snow White’s Scary Adventures is dark and Germanic. The Tea Cups are psychedelic.

All of the Marvel Cinematic Universe (MCU) competitors (including Marvel movies from Fox Studios) play the same note — that comic-book movies desperately want to be taken seriously. Everything is darkness and grit and high stakes. The result is a tired look that has defined superhero movies for the last two decades.

Here are three posters for Marvel’s movies this year.

It’s a striking contrast. Color. Humor. Even nostalgia. In short, they look fun and enticing. You could put any of those posters into a 1980s multiplex and they would feel right at home.

A Disney Imagineer once said that the queue was “Scene One,” where the set-up begins. He then proceeded to send us down an endless, dimly lit tunnel that at no point ever looks like a “Mountain in Space.”

You already saw all three Tobey Maguire Spider-Man movies. Then you watched one-and-a-half Andrew Garfield Spider-Man because you’re a glutton for punishment. You know how Spider-Man got his powers. We don’t need yet another preshow where Gary Sinise comes in and explains all about the radioactive spider.

Spider-Man Homecoming has the good graces to skip the origin story. We start with a fully-powered Spidey. It’s the most refreshing reboot in recent memory.

Keep Your Hands and Arms Inside the Vehicle

Much like Rock ‘n’ Roller Coaster, Spider-Man Homecoming uses a surprising launch mechanism to catch you off guard in a delightful way.

It’s a Spider-Man home movie, showing how he got recruited by Tony Stark and ended up in the airport battle from Captain America Civil War. Tom Holland’s enthusiasm as a teenage superhero is infectious. It establishes the movie right from the start as a different kind of comic book movie.

Remember Tomorrowland of 15 years ago? You had a classic, important thrill ride in Space Mountain. A sweet nostalgia piece in Carousel of Progress. A goofy Robin Williams time travel story in Timekeeper. And a horror movie in Alien Encounter.

Marvel has likewise not been afraid to experiment with genres. Guardians of the Galaxy was a goofy sci-fi movie. Captain America: The First Avenger was a World War II movie. The Incredible Hulk was a disaster movie.

I love that they do this. Spider-Man Homecoming definitely has comic book plot points, but so much of it is framed around a kid actually in high school, dealing with things that have nothing to do with a guy in a Vulture suit selling ray-guns.

Transporting You to Far-Off Places

A lot of Disney rides take you out of the everyday. They’ll transport you to an abandoned mine shaft, a NASA training center, or a terrible comedy club in Monstropolis.

Superhero movies usually do the same. But Spider-Man Homecoming subverts the usual awe-inspiring shots of Spidey swinging through skyscrapers and takes the webslinger someplace he’s never been before.

One of the great moments in the movie is watching Spider-Man climb over houses, knock down treehouses, and crash a pool party while trying to keep up with the bad guys. At one point, he runs out of things to swing from and has to spring across a golf course like a normal dude.

It’s so different from the endless CGI battles of the X-Men movies.

All Your Favorite Characters

The beautiful thing about the MCU is how likable its characters are. It seems like one big party. The guy playing Star-Lord can make a friendly sports bet with the guy playing Captain America, and then they dress in fun costumes and visit children’s hospitals. Mickey, Donald, and Goofy used to do the same.

The marketing material features a lot of Robert Downey, Jr. as Tony Stark/Iron Man. But though the Avengers are responsible for a lot of the background plot machinations, they mainly stay out of this movie.

Except when they’re popping in to lend their awesome likeability and humor to a situation, reminding the audience that this is all part of one great big fun story.

Stark gets the most screentime, but one other key Avenger shows up in three separate instances and steals all three scenes. It’s all for laughs and it’s fantastic.

Is Spider-Man Homecoming Worth Your Ticket?

From the moment Michael Giacchino’s thrumming version of the old Spider-Man cartoon theme song kicks in, this movie is as fun as any Disney thrill ride, and just as heartwarming.

I guess since I’m talking about movies, I may as well make some kind of arbitrary rating system. Here’s what I think Spider-Man Homecoming is worth. 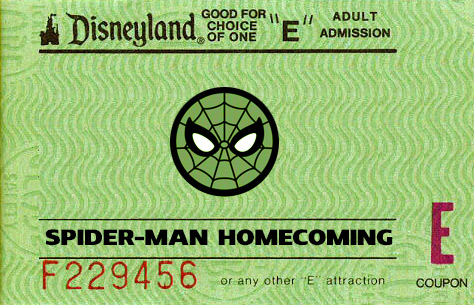