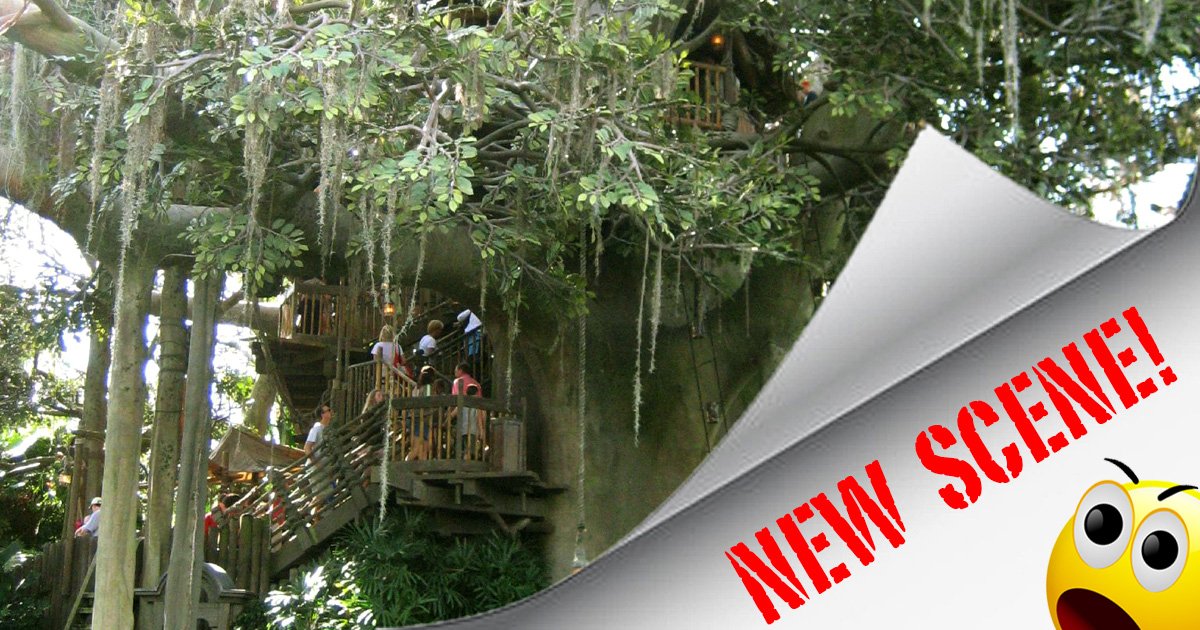 To understand what this means, you have to consider what we’re up against.

By the time the treehouse arrived in Florida, the movie was already a decade old.

In the 1980s, a kid named Shane discovered Swiss Family Robinson through the magic of home video — pirated home video, actually, since dad was one of the few in town who owned two VCRs.

In the movie, the Robinsons defeated the pirates. In my household, the pirates won. We kept that bootleg tape for years.

My siblings and I know every scene by heart. When our friends the Kirkpatricks would come over, we would play Swiss Family Robinson. Everybody got to be a member of the Robinson clan — except we had an extra girl, so my poor younger sister had to be the monkey.

We convinced our parents to let us go swimming in our jeans because the Robinsons wore pants while sliding down waterfalls. This is also where I learned that swimming in jeans is not at all comfortable.

At some point, budding filmmaker Shane wrote the script to Swiss Family Robinson 2: The Robinsons’ Cruise. It remains the great lost film of that generation. 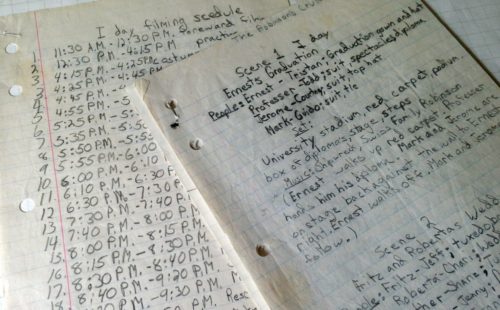 By 1999, the kids who first watched Swiss Family Robinson in movie theaters were now approaching retirement age. Disneyland had a decision to make. It took them half a minute.

The Robinsons moved out. Tarzan moved in.

Unlike when Winnie-the-Pooh evicted Mr. Toad, park fans received the news with a sigh of ambivalence. The only one who seemed bothered by it was a young adult named Shane, who by now had a framed movie poster in his office and still counted Swiss Family Robinson among his all-time favorite movies, right up there with Empire Strikes Back and Raiders of the Lost Ark. 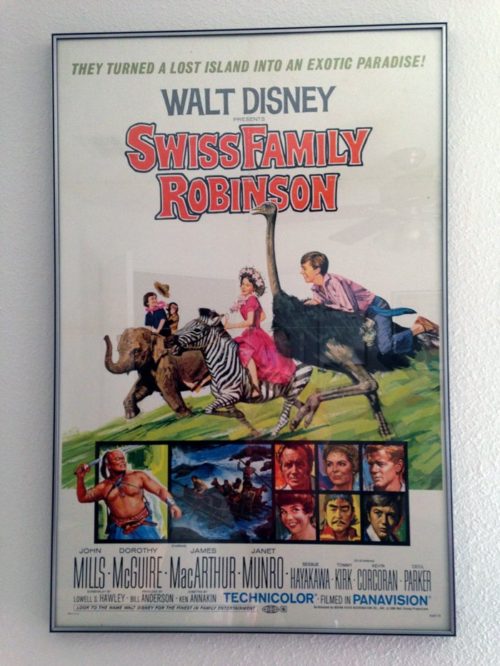 Still got that too.

When Hong Kong Disneyland opened in 2005, it became the first Magic Kingdom-style park not to include the Swiss Family Treehouse. They got the Tarzan version instead.

In 2015, Disney legend Kevin Corcoran — who played little Francis in the film — passed away, leaving Tommy Kirk as the last surviving cast member.

The clock has been ticking for decades now. It’s no surprise that corporate Disney is much more interested in red-hot IP like Marvel and Star Wars than a Technicolor classic from the vault that is now almost 60 years old.

With each scheduled refurbishment, the panic intensifies. The walls go up, the Treehouse goes to sleep, and we wonder if it will ever awaken again.

One day, those tarps will come down and in its place will be Anna and Elsa’s Summer Treehouse. Let’s face it. Even Tarzan is 20 years old by now.

The Swiss Family Treehouse Gets a New Scene

Last October, the Treehouse came out from under refurbishment. The Robinsons had survived.

But something was different.

It’s a newly cleared area, just to the right of the Robinsons’ kitchen as you’re leaving the attraction. The new scene incorporates a little waterfall that has always been part of the Treehouse landscape. It appears to be a waiting area for wheelchair guests, while the rest of the party traverses the narrow stairs. 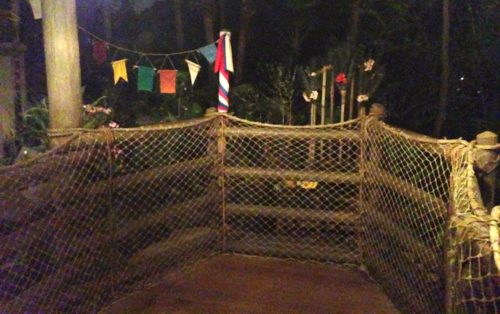 Sorry for the grainy photos. I first noticed it at night.

The props must be confusing to the average guest. Just a series of festive flags strung between brightly-striped poles. And right next to it, a bamboo chair adorned with some palm fronds.

Who knows what people think when they see this little set-up? I heard more than one person refer to it as Jack Sparrow’s throne. The flags are just as puzzling. 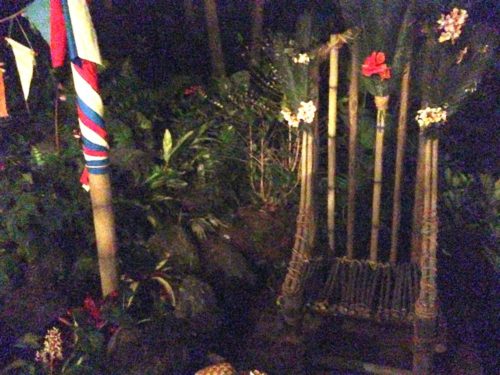 Note that the chair is actually off-limits behind a railing. You can’t sit in it. But if I could, I would buy the PhotoPass picture for sure.

It takes a true fan to recognize it.

There’s a scene that takes place in the movie where the Robinsons declare the first national holiday in the history of their island. As part of the festivities, they stage a race, with each of the children riding on various exotic animals like elephants, ostriches, and zebras. The monkey (as played by my sister) rode the dog.

The family never gets to finish the race because the pirates show up, leading to an exciting third act battle.

Somebody at Imagineering must still love the movie because the new Swiss Family Treehouse scene is straight from the animal race. The chair is the starter’s chair, from which Mother (Dorothy McGuire) presides over the race, and which eldest son Fritz is responsible for decorating the night before. 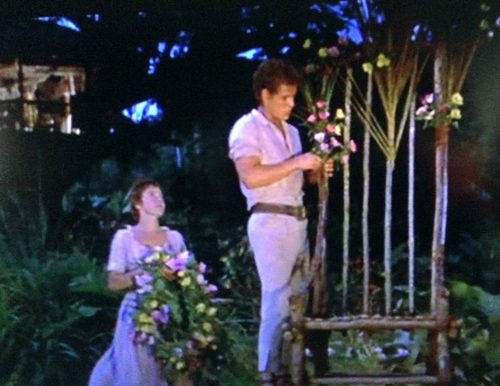 Compare this movie frame to the chair above. They spent a lot of time making it screen-accurate.

The striped poles and flags form the starting line. Father and Ernst can be seen stringing them together just before first-grader Francis catches a tiger (I told you the movie was awesome). 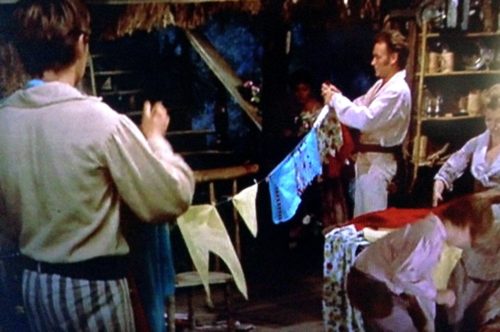 The flags in this frame are not a perfect match with the Magic Kingdom Swiss Family Treehouse flags. This may be a continuity error in the film, since the flags in our next movie scene are much more similar to what is now in the parks.

After decades of assuming the treehouse was on the chopping black, it is incredible that Disney has actually gone and added more details to it.

And not only have they plussed the attraction, they’ve added something that doesn’t even make sense to the average guest.

It’s not another ingenious water feature like that paddlewheel, which is interesting for its own sake. It’s not a placemaking vignette to reinforce the “adventurous” or “shipwreck” mood of Adventureland.

Instead, it’s a direct nod to the movie, only recognizable in that context. And even then, it is a painstaking recreation of props that are not even central to the plot. Though they are clearly seen in the movie, the camera is more focused on the animal hijinks than anything to do with an elaborate bamboo chair.

I can hardly believe they’ve done it. 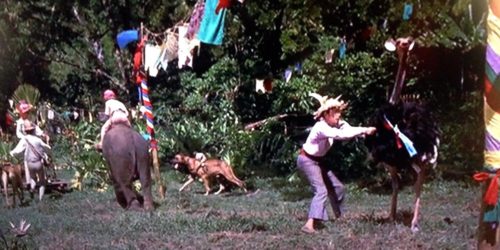 Give it a look next time you’re in the Magic Kingdom. The Swiss Family Treehouse could use some more turnstile clicks. And check out Swiss Family Robinson on video. I promise you’ll love it.

Let me know if you need a copy.