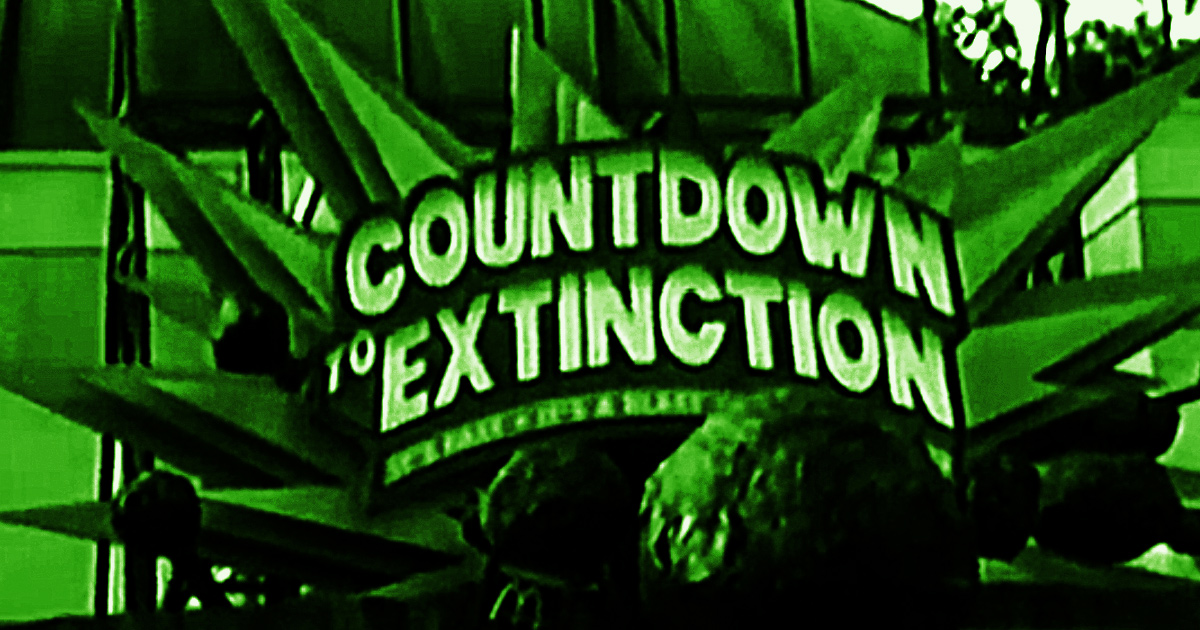 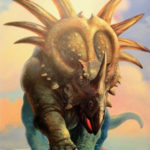 We’ve reached the Top 10 in our Countdown to Extinction. Fittingly, we turn to the ride that gave us that angle.

When the park first opened, Disney’s animated feature film Dinosaur had yet to debut. The park’s premier dark ride was known by the much more interesting name of Countdown to Extinction — CTX, in early internet parlance.

CTX hasn’t changed much in the last 20 years. But we do miss the days when the pterodactyl would swoop and the Compsognathus was a temperamental rope-and-pulley effect.

Most of all, we miss the beautiful bathing Styracosaurus who graced the Countdown to Extinction reflection pool at the entrance to the Dino Institute.

Today the fountain has an Iguanadon statue and a barrier of plants. But back in 1998, the pool was a more communal thing. Famous Imagineers like Joe Rohde would sometimes be caught dipping small diapered children into the cool waters.

Ah, the age of innocence. 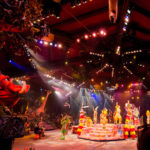 As we celebrate the Animal Kingdom 20th Anniversary, let us pause for a moment to mourn the loss of an entire themed land.

Slapped together at the last minute, Camp Minnie-Mickey was the temporary holding zone for what was intended to be a much more elaborate take on imaginary animals. Utilizing a cutting-edge “summer camp” theme and featuring the static backpacking figures of Huey, Dewey, and Louie, Camp Minnie-Mickey turned into an accidental success story when it became the home of the park’s surprise hit, Festival of the Lion King.

It was not until the early phases of Pandora – the World of Avatar that the park could finally justify the expense of moving Festival of the Lion King out of its odd North American wilderness setting. With the new Harambe theater district complete, they were finally able to bulldoze the rest of this “temporary” land more than a decade after it opened. 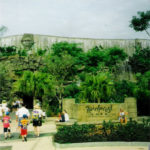 The Rainforest Cafe has been there since Day One, but one of the most striking visual features of early Animal Kingdom has vanished like the rainforests of South America.

For many years, a massive sheet of water thundered from the peak of the Rainforest Cafe roof, casting an ethereal shadow over the main ticketing courtyard.

But the encroachment of nature soon took over. The jungle canopy in front of the restaurant thickened into an impenetrable darkness. With no one to witness their bewitching power, the beautiful waterfalls stopped running. 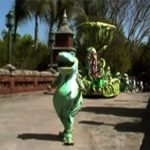 7. Artimals (Whatever the Heck Those Are)

Get ready for more late-90s edginess! Animal Kingdom’s first daytime parade was something called the March of the Artimals, featuring bizarre and “artistic” interpretations of your favorite friends of the animal world.

There was also a Christmas version, Mickey’s Jingle Jungle Parade. But the parade had its final performance three years ago. 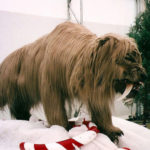 Looking to flesh out its limited opening day line-up, Dinoland U.S.A. opened something called the Dinosaur Jubilee in the spot that is now Chester and Hester’s Dino-Rama. 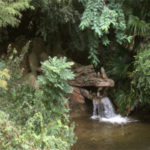 The park lost one of its Opening Day rides in the early part of this century, when the Discovery River Boats closed down.

During the Animal Kingdom 20th Anniversary, the docks were still in use as character greeting areas, but the Discovery River itself remains shrouded in mystery.

In the bend near Camp Minnie-Mickey, riders would encounter a stone formation of a dragon — which is still easily seen from the bridge to Pandora.

And just beyond the sculpture was a dark cave, in which lived a fearsome fire-breathing dragon.

The dragon — whose head is still seen above one of the ticket booths at the park entrance — was intended to foreshadow the park’s next expansion area. Beastly Kingdomme would feature a dragon rollercoaster, hedgemaze, and several other attractions celebrating the “imaginary” portion of the Animal Kingdom triumvirate.

Possibly due to a competing dragon coaster down the street at Universal, the Beastly Kingdomme never materialized. Eventually, the expansion space became Pandora — The World of Avatar. 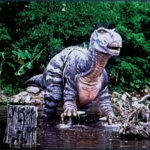 In Countdown to Extinction, as in today’s Dinosaur, time travelers bring back a live Iguanadon at the behest of Dr. Grant Seeker. You even see the creature roaming the halls of the Dino Institute.

But in Animal Kingdom’s early days, the Iguanadon would leave the Institute to frolic at the river’s edge in Dinoland U.S.A., in full view of the Discovery Riverboats.

Sadly, this magnificent animatronic was removed when the boats closed. Even more disgraceful was that Disney shipped him off to Paris, to rot in their Studio Backlot boneyard. 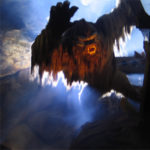 What discussion of extinct Animal Kingdom animals would be complete without mentioning the infamous Disco Yeti?

Technically, it’s not the disco version that’s extinct, but its predecessor — the fully functioning Yeti of Expedition Everest – Legend of the Forbidden Mountain.

Billed as one of the largest and most elaborate Audio-Animatronic figures ever created, the Yeti was a fearsome encounter, swiping at riders during the last scene of the ride.

Unfortunately, the mechanics were so powerful that they actually ruptured something in the mountain’s support system. Unable to figure out how to extract the figure and perform the necessary repairs, a strobe-light was installed on the static figure, earning him the inauspicious title of Disco Yeti.

Maybe some day Disney will figure out how to resurrect the original yeti. But in the meantime, you’d think they’d find a way to bring back the screeching hawk from Everest’s peaks, which has also disappeared in recent years. 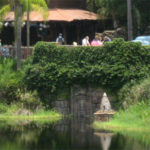 2. Denizens of the Lost Water Temple

The Lost Water Temple of Asia is an enduring Parkeology mystery. It’s something we still get questions about to this day.

No one knows what’s inside the lost water temple. What secret beasts prowl its flooded corridors? Parkeologists have been asking that question for almost a decade.

Sadly, the construction of Rivers of Light may have buried the secret forever. The entrance to the lost water temple has vanished for good.

But I have recently come into possession of a map, hinting at an obscure back entrance. Perhaps someday, I will be able to share this discovery with the world… 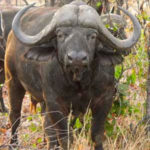 If the water temple is our most asked-about conquest at Parkeology, then the secret buffalo path is a close second.

On separate visits in 1998, both Ted and Shane spent many hours exploring the new park. We were quite taken with an idea heretofore unknown in Disney theme parks — unstructured exploration.

Disney’s Animal Kingdom was built to reward the adventurous guest, with several themed areas that appeared to be off limits. One such path was initially labeled as a water buffalo path, which led seemingly into wild jungle on the trail between Africa and Asia.

The best part of this path is that an even more secret secondary path branched off into more remote territory — including a river fording across stepping stones that can still be glimpsed to this day.

At the time of the Animal Kingdom 20th Anniversary, the secret path has been swallowed up by foliage. But there’s always a chance that some enterprising explorer will stumble onto it in the future and blaze a new trail for us to follow.

Until then, here’s to the next twenty years.